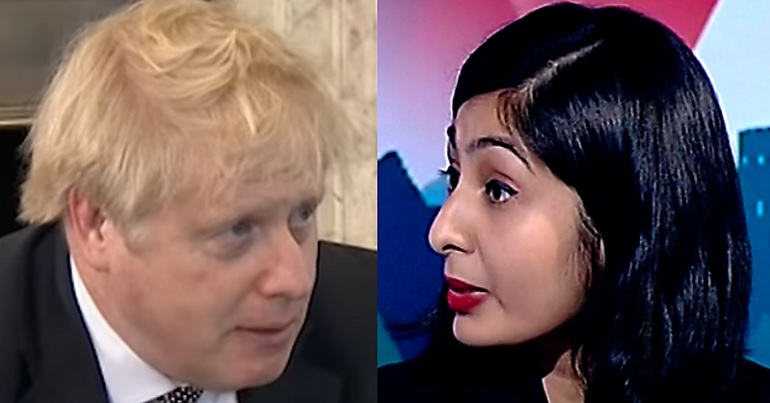 Boris Johnson’s cabinet reshuffle has dominated the headlines this week. But the most exciting new Labour MP around just destroyed it, live on the BBC.

Fire in the (political) booth

Zarah Sultana is the MP for Coventry South, elected in December. But she’s already making her mark as a powerful speaker. From corporate lobbying to Tony Blair via the DWP and foodbanks, Sultana’s eloquent yet devastatingly good diatribes are already impressing. And now, she’s taken aim at “Bullingdon boy” Johnson and his closest government colleagues.

Sultana was speaking on BBC Politics Midlands on Sunday 16 February. She used the opportunity to hammer home a few facts about the PM and his allies. As Sultana said of the cabinet reshuffle:

For me, I saw the Westminster drama as quite a distraction.

She then went on to dispel any notion that Johnson’s team were like you and me:

what stood out was that 65% of Boris Johnson’s cabinet is now made up of people who are privately educated.

The PM is a Bullingdon boy, the Chancellor was an investmnet banker and his family are billionaires, and 65% of the Cabinet were privately educated.

It’s not just Sultana saying that. Her comment about the percentage of the cabinet who went to private school is based on a think tank’s research.

The Sutton Trust focuses on social mobility. And as quickly as Johnson had announced his new cabinet, it crunched some numbers. It found that of the PM’s cabinet:

The Sutton Trust noted how the figure for privately educated ministers was higher than any of the other governments since 2010. It was even more than David Cameron’s coalition cabinet, of which 62% of its members went to fee-paying schools. But the trust also made a point about the type of higher education Johnson’s cabinet members had. It said:

Of the 26 ministers attending Boris Johnson’s new cabinet (at 1000, Friday 14th February), half (50%) went to Oxford or Cambridge universities. This compares with 27% of all Conservative MPs, 18% of Labour MPs and 24% of all MPs. A further 8% of Johnson’s cabinet were educated at other Russell Group universities (excluding Oxbridge). 31% of the new cabinet went through a ‘pipeline’ from fee-paying schools to Oxbridge.

More broadly, it noted how 41% of Tory MPs went to independent schools, compared to just 14% of Labour ones.

Johnson’s new catchphrase is “levelling up“. He wants to tackle inequality, apparently. But it’s hard to see how his cabinet will achieve this. Their own privileged backgrounds put them miles higher in social mobility terms than most of the population. Moreover, with the Tories now representing many northern working class communities, it’s hard to see how these ministers could even begin to imagine what life is like when you’re on the bottom rungs of society.

But we’ll leave the last word to Sultana. As perhaps she summed up Johnson’s cabinet the best: