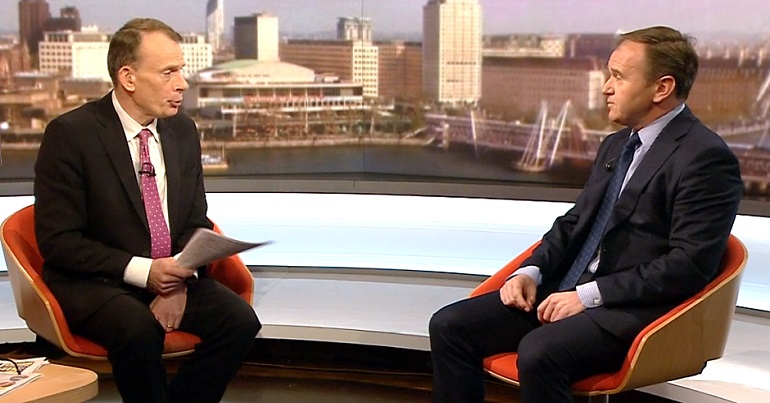 The Andrew Marr Show has once again caused controversy over Brexit. As The Canary reported, during the programme on Sunday 23 February, environment secretary George Eustice refused to rule out chlorinated chicken coming to the UK from the US. But Labour has already hit back.

Chlorinated chicken is controversial. As The Canary previously reported, it’s not so much the process that’s contentious, but that it can lead to lower hygiene standards in slaughterhouses. The government’s position has repeatedly flip-flopped, depending on which minister is in charge.

So, Marr brought up the issue. He quoted Eustice’s predecessor, Theresa Villiers. As FarmingUK reported in January, she told BBC Countryfile that:

The BBC host, therefore, probed the new environment secretary about whether this was still the case. The Tory minister at first said that Villiers’ statement was “correct”.

There’s room for a sensible discussion, here, because we also use lactic acids… notably on beef. We don’t use it on poultry.

So there’s a compromise to be done?

To which Eustice replied:

There’s a discussion to be had, yeah.

The Environment Secretary says "there’s a discussion to be had" about chicken washed in lactic acidhttps://t.co/J772G3dOhQ pic.twitter.com/8oxIzNuj6M

Previously, the EU did not allow the use of lactic acid on beef. Then it changed the rules in 2012. But the UK government continued to pressure it to allow the wash to be used on poultry. To date, the EU has not changed its mind.

Following Eustice’s appearance on Marr, Labour was straight out of the blocks. Its shadow environment secretary Luke Pollard said in a press release:

Chlorinated chicken being sold in Britain is a genuine risk, unless this backdoor to lower standard US goods imports is closed and a ban is put into law. It’s not just Labour saying this, there is a chorus of voices from the NFU to the RSPCA and who all want legal guarantees British farm standards won’t be undercut.

The thin end of a trade deal wedge?

So far, the government has not commented on Eustice’s claims.

Labour is correct that allowing chlorinated chicken into the UK is a risk to standards. But the Tories’ unclear position sums-up wider concerns about a US trade deal. With the NHS still not off the table, food standards may well end up being the thin end of the wedge.