Staff are striking at a controversial homeless charity - Canary 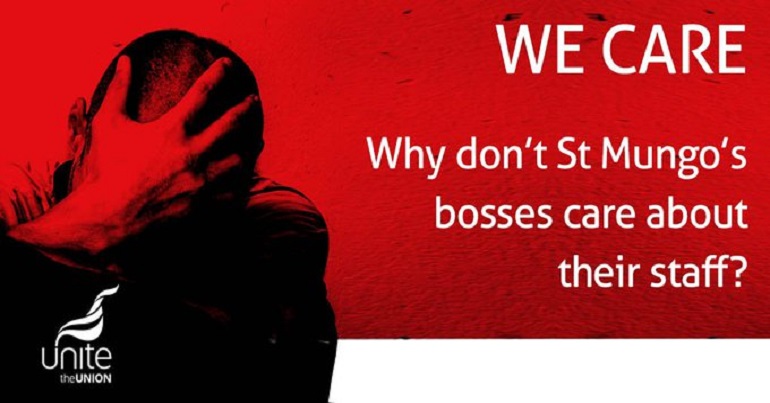 Staff at a controversial homeless charity have recently voted to strike. It comes amid claims of ‘threats’ to jobs, working conditions and homeless peoples’ services, And now, the union involved has taken to social media to ‘expose’ the charity’s alleged wrong-doing.

St Mungo’s is a national charity for homeless people. But it’s currently in an industrial dispute with Unite the Union. As the union wrote:

The issues in the dispute have remained the same and centre on the tearing up of the junior staffing cap, which members fear risk a reinstatement of race to the bottom terms and conditions, an onerous sickness policy and disproportionate use of grievance and disciplinary procedures.

This is the second time Unite balloted St Mungo’s staff. The first did not meet the government’s 50% threshold of members taking part. Since the second ballot, Unite has tried to reason with St Mungo’s. It wrote an open letter to the charity’s board. In it, Unite said its members were:

unhappy at the draconian use of disciplinary procedures, which are disproportionate and unfairly applied, and of a sickness policy which is so punitive it is making people sicker with stress. None of these issues have been addressed.

It said that it was open to talks:

We very much hope the board will use its influence to encourage senior management to return to the table, so that our members can get back to what they do best; helping homeless people rebuild their lives.

But this didn’t work. So, at the start of February Unite’s members voted to strike.

The south-west branch of Unite has been sharing infographics about the strike on Twitter:

Unite members at St Mungo's deserve to be treated fairly & with respect. But their employer has pushed ahead with changes that threaten jobs, working conditions & the quality of services to rough sleepers. Support St Mungo's workers ✊#StMungosExposed #TimeToListen pic.twitter.com/hVbATiHXuS

Senior management in St Mungo's want to tear up union-negotiated agreements and reinstate race-to-the-bottom Terms & Conditions. Unite are behind the workers every step of the way to achieve a fair outcome. #StMungosExposed #TimeToListen pic.twitter.com/fWqz3dWTQT

And people have been supporting Unite members’ decision:

Solidarity with #StMungos workers who have voted to strike, among their demands is a guarantee that homeless people's personal data won’t be shared with the Home Office #StMungosExposed #Unite #strike https://t.co/EcEe6GF6Kg

Solidarity with the @StMungos workers standing up, not just for themselves, but showing the whole charity sector that workers demand respect! (and demanding an end to the shameful #hostileEnvironment in #HomelessOutreach) #StMungosExposed @UniteLE524 https://t.co/ZdQEWFxI3C https://t.co/cgLBEXrOT6

We are disappointed with the ballot result. We made a series of offers that Unite officials refused to engage with. Our offers remain on the table. We are not cutting pay, altering staff terms and conditions nor making enforced redundancies. We continue to believe a strike is disproportionate and unnecessary…

Meanwhile, the charity is actively trying to dispel the notion that it has a problem. It said in a statement:

53% of [Unite] members voted: of those, 241 people voted to strike. This represents 14% of our total staff yet the decision to strike will be felt across the entire charity.

St Mungo’s priority now is to minimise the impact of Unite’s strike on our most vulnerable clients.

But the “impact” of Unite’s decision on its “most vulnerable clients” seems disingenuous. As St Mungo’s has not always been concerned with those same “clients”.

Not the first controversy

St Mungo’s worked with Home Office patrols when they went out on the streets in search of rough sleepers deemed to be in the UK illegally to arrest and deport.

At the time St Mungo’s denied that it passed on either the locations where rough sleepers bedded down or personal information about them to Home Office enforcement teams without their consent. Some of the rough sleepers who were identified on immigration enforcement patrols were subsequently forcibly removed from the UK. Some of these removals have now been found to be unlawful and the Home Office is paying compensation.

The charity apologised afterwards. But as the Public Interest Law Centre noted, the “damage done in terms of trust may well be irreparable”.

Talks between Unite and St Mungo’s are ongoing. But it seems that the charity is trying to gain support by using the homeless people it supports as pawns. Just because workers are employed by a charity, it doesn’t mean that organisation can abuse their goodwill. And with St Mungo’s less-than-pious track record, it may well wish to reconsider its position in relation to Unite.

Featured image via Unite the Union