Branson is now literally milking coronavirus for all it's worth - Canary 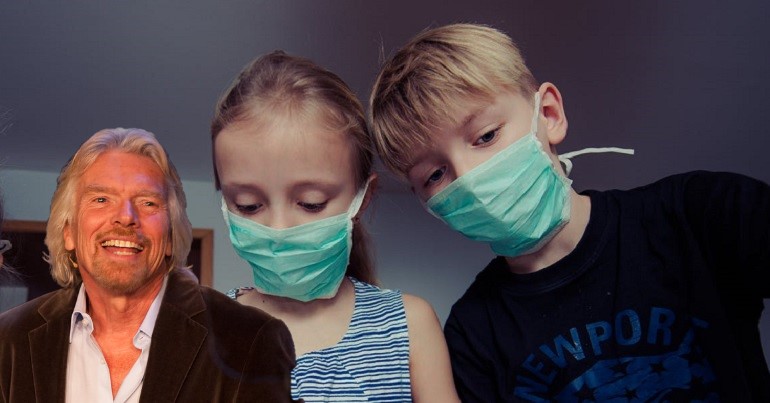 Coronavirus (COVID-19) is a global pandemic which could potentially affect nearly everyone on the planet. Yet, while most people are rightly concerned about the potentially life-threatening health complications, a select few, including Richard Branson, are asking for government bail-outs.

It’s been widely reported that Branson’s airline Virgin Atlantic has gone cap-in-hand to the UK government. The company is asking for £7.5bn in credit facilities for the airline industry. This is to shore-up its and other companies finances, as the fall-out from COVID-19 starts to bite.

But for many, this has not gone down well. As journalist Lesley Riddoch tweeted:

Interesting to see how public mood has changed with Covid19 crisis. Look at reaction to reports that Richard Branson wants Boris Johnson to sanction a £7.5bn bailout for Virgin Airlines. Absolute fury. The public is rediscovering the value of community & emptiness of biz as usual

The airline industry is not the only sector to be pleading poverty in the face of coronavirus. The UK hospitality industry is also begging the government for help. As BBC News reported:

lobby group UK Hospitality said coronavirus was an ‘existential threat’ to the sector.

Other government policies UK Hospitality would like to see include a business rates holiday for all businesses regardless of size, all payments to HMRC suspended for three months and Government Statutory Sick Pay payments to all hospitality businesses.

While the airline and hospitality industries are rightly concerned about redundancies, its surely not the fault of staff or government that these businesses are financially vulnerable. For example, a consortium led by Virgin Atlantic bought Flybe in 2019, promising a large cash injection to save the airline. Branson went into this deal despite the company issuing profit warnings. Was this a wise move, given that Virgin Atlantic has reported losses for two years in a row?

It’s also worth remembering that Virgin’s in partnership with Delta Airlines, the largest “airline in the world in terms of assets and the second largest in terms of passengers carried”. With soaring profits, Delta’s currently worth tens of billions of dollars.

And meanwhile, private UK rail companies could now also be going cap-in-hand to the government. This could include Branson’s Virgin Trains, which has made £306m in dividends from the public purse since it formed over 22 years ago.

Socialism for the rich?

Essentially, the problem for these industries is cash. Because they’re service-led, they rely on people buying their products to pay the bills. In layman’s terms – money comes in, money goes out – with nothing saved for a rainy day. Which, if that was a family of three on a council estate in London, would be their problem, not anyone else’s. But corporations employ countless people. So, they have that as leverage to beg the government for cash.

The idea of a government bailing out corporations when their business model messes up is often called ‘socialism for the rich’. In a Facebook post, writer Ad Sinistram explained why.

What Is Privatising Profits And Socialising Losses?

Privatising profits and socialising losses refers to the practice of treating company earnings as the rightful property of shareholders, while losses are treated as a responsibility that society must shoulder. In other words, the profitability of corporations are strictly for the benefit of their shareholders. But when the companies fail, the fallout—the losses and recovery—are the responsibility of the general public. Popular examples of this include taxpayer-funded subsidies or bailouts…

The phrase privatising profits and socialising losses has a number of synonyms, including socialism for the rich, capitalism for the poor. Another likens it to lemon socialism.

Ring any bells? It should do. Because we’ve been here before.

As Daniel Margrain wrote for Renegade Inc, the 2007/08 financial crash and subsequent bank bailouts were “socialism for the rich”. He said:

Following the 2008 crash, over £1 trillion of public money – with almost no conditions attached – was poured into the banking system. In 2012, the stated intention was that this windfall was to be pumped into the local economy…

Rather than being used for production and consumption, the money went into speculation and share buy-backs. The purpose of this cash injection by the state was to re-boot the profits of banks and hence the ‘bonuses’ of bankers. Consequently, in 2012, 2714 British bankers were paid more than 1m euros of public money – 12 times as much as any other EU country, ostensibly to alleviate a crisis that they helped cause.

Despite the public outcry over the 2007/08 financial crisis, it appears nothing has changed. With COVID-19 looking set to hit big business, these corporations will most likely again get a huge amount of public money. It will be given under the guise of ‘protecting jobs’. But in reality, it’s to protect the profits and the purses of already very rich people. Not least among these, Richard Branson.