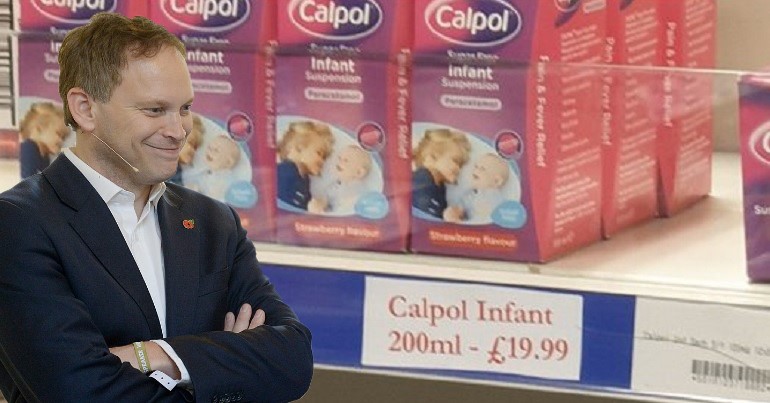 There’s been widespread public outcry over a group of pharmacies charging extortionate prices for products, like £19.99 for Calpol, during the coronavirus pandemic. But the owner of the chain happens to be a Conservative Party donor.

Many people on social media may have seen this tweet. It shows a Bath branch of Jhoots Pharmacy that’s been selling paracetamol for £9.99:

THIS! Today! Hiking prices 😠😠😠 Paracetamol that you can normally get in Lidls & Poundland at under a £1. #TheWorldsGoneMad pic.twitter.com/MoHq8Bb67e

Capitalism in action. People will quickly see why Labour won a landslide victory in 1945!

How about calling out all the profiteers…and then boycott them?

But it wasn’t just adult paracetamol that the pharmacy was seemingly profiteering from:

Really disappointed that a local @JhootsPharmacy in my ward is charging extortionate prices for paracetamol and calpol.

Not good for a community pharmacy putting profits before people😡 #COVID2019 pic.twitter.com/33NV6i3kMi

Jhoots Pharmacy claimed in a statement that a “small number of branches” had some ‘pricing disparity’ issues on Wednesday 18 March. It claimed it was due to an “erroneous communication”. The pharmacy said it had “acted immediately” to sort the situation. And it noted on Twitter that it would “make full refunds to… customers affected”: 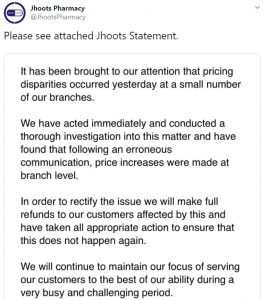 Admittedly, the pharmacy has dozens of branches. But it appears that the pricing hike was nationwide. Because reports came in of cases from Bath, Birmingham, Dudley and Leicester. And as the Shropshire Star reported, people were affected:

in one of the most deprived constituencies in England, with a 2018 study commissioned by the End Child Poverty Coalition finding more than half of children grew up in poverty.

But there’s more to this story than meets the eye.

Hey, @CCHQPress @grantshapps Just enquiring if the Sarbit Singh Jhooty who donated £7.5k to the Tory Party/Grant Shapps is the same person that owns the chemists (@JhootsPharmacy) who have charged folk £9.99 for paracetamol & £19.99 for Calpol during a national health crisis? pic.twitter.com/QEIVefL5D8

Yes, Sarbjit Singh Jhooty is a Tory Party donor; specifically to transport secretary Grant Shapps. Shapps’s register of interests shows various private donations from Jhooty from 2017 onward. And the same Mr Jhooty is also the director of Jhoots Pharmacies. And interestingly, Shapps opened a branch of Jhoots Pharmacy in 2015: 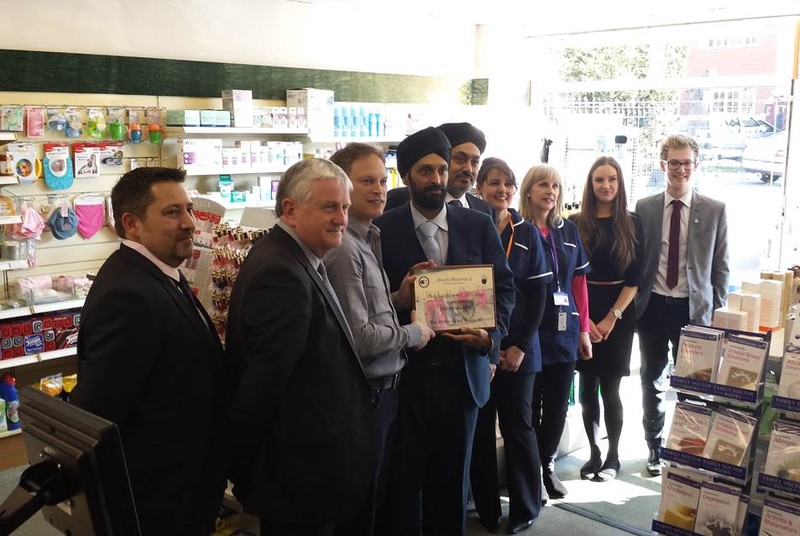 It was brought to our attention that pricing disparities have occurred at a small number of our branches. We have conducted a thorough investigation and found that an internal pricing communication resulted in some erroneous and isolated price rises, which were immediately rectified.

We are deeply sorry for this error and recognise that during this difficult period and beyond, the community should always have access to the family medicines they need at the correct prices. Our branches are at the heart of the community and have been serving them loyally for decades. We take our responsibilities to our customers and neighbours seriously and can reassure everyone this will never happen again.

Customers who have already purchased an item which has been mis-priced can claim a full refund, and those who are unwell or self-isolating can also contact their local branch to arrange for medicines and other essential items to be delivered to their homes.

Corporate profit. At all costs.

What a load of flannel. Welcome to the #covid19 list of shame.

The scandal comes as Boris Johnson claimed he didn’t “want to see profiteering of any kind” from companies. Yet it seems that a donor to his party has done just that. So, even in times of national crisis, if it looks like it a duck, swims like a duck and quacks like a duck – it’s probably a Tory. Because this corporate capitalist approach of turning a profit at all costs, regardless of the impact on those who can least afford it, sums them up perfectly. Including Jhoots.