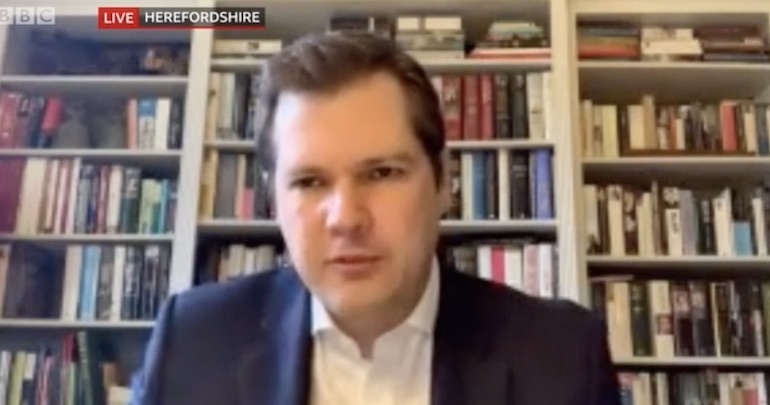 On 1 April, Tory minister Robert Jenrick ‘lost’ 4,000 ventilators live on air. And no, this isn’t an April Fool’s joke. Far from it in fact, because that’s potentially over 4,000 people’s lives at further risk. It’s yet another searing indictment of this government’s terrifyingly shambolic approach to the coronavirus (Covid-19) pandemic.

Secretary of state for housing, communities and local government Jenrick did the rounds on breakfast TV. Kay Burley asked him on Sky News:

Let’s talk about ventilators. How many do we have today?

Jenrick paused for a moment and replied:

Yet, by the time he got to BBC Breakfast things had changed. He was challenged about the government’s response. The host asked:

the reason we are in this situation is we left it too late: to place orders, to understand the gravity of the situation. Is that a fair accusation?

Jenrick’s fudged reply to this said it all. He insisted:

I don’t think that’s fair. We’ve been working on this for a number of weeks.

On 29 January, the UK reported the first two confirmed cases. Coronavirus continued to spread around the world. By 4 March, there were “90,000 confirmed worldwide cases and more than 3,000 deaths”. The UK reported its first death on 5 March.

But then Jenrick dropped an astonishing line. With absolute certainty, he said:

the number of ventilators, which is 8,000 in the NHS today, will increase very significantly.

As one person pointed out on Twitter, “we lost 4000 ventilators in less than an hour”:

#KayBurley – How many ventilators do we have today?

Robert Jenrick – We have over 12,000 ventilators at the moment.

Jenrick then pitched up on #BBCBreakfast & told them that we had 8,000 ventilators.

So we lost 4000 ventilators in less than an hour. 🤔 pic.twitter.com/j98Ive6noL

To put it kindly, Jenrick, appearing as the government’s spokesperson, doesn’t have a bloody clue. On Sky News, Burley also pushed him further on ventilators and asked:

How many in total, ventilators, available for people who need them by the end of the week?

“I don’t have that figure to hand”, Jenrick replied, “but we will have… we think by next week, we’ll have thousands more ventilators than we have today”. And he couldn’t give a clear answer about how many the government has even ordered, choosing instead to blame the companies making them.

“We think by next week we will have thousands more than we do today.”

Housing and Communities Secretary @RobertJenrick says the UK is ordering as many ventilators as companies are able to produce in a bid to ease pressure on the NHS. JM pic.twitter.com/DMmmvP6d1I

And as another Twitter user pointed out, these are facts that we “desperately” need:

FINALLY Robert Jenrick MP being held to account, @KayBurley cutting off his ramblings and desperately trying to get the facts that the British public needs – but still didn’t get.

At the time of writing, the UK has 25,150 confirmed cases. 3,009 of these are newly confirmed, and so far 1,789 people have died. Tragically, we know there are many more people who are ill but can’t get tested. The government’s facing a “backlash” over its entire testing policy. NHS workers now have another battle to even speak out after being forced to work without adequate personal protective equipment (PPE). Indeed, some GPs have reportedly been told to buy their own PPE.

And in the midst of this, Jenrick ‘lost’ 4,000 ventilators. We can’t trust a government which can’t give this simple figure with accuracy. For now, many people’s greatest wish is to stay well and just hope we don’t lose family and friends. But the time is coming when the government’s handling of this crisis needs to be called out. Because day by day, it looks less like leadership and a lot more like potential manslaughter.