Sanders has endorsed Biden, but progressives won't join him without a massive policy shift - Canary 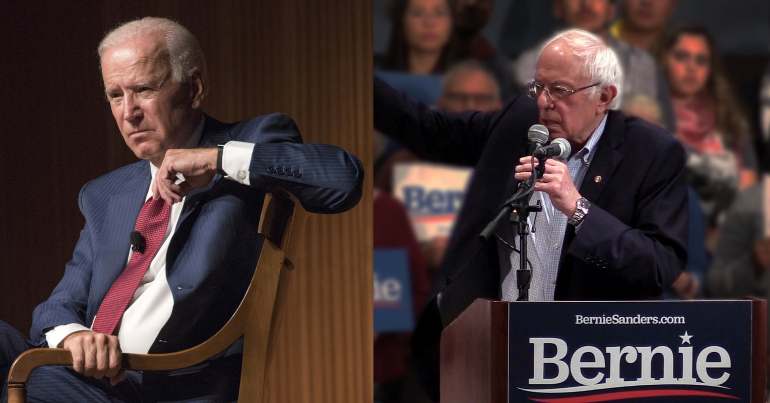 Bernie Sanders has now endorsed establishment rival Joe Biden for the US presidency. The two had previously clashed during the Democratic Party primary over policy issues like the ‘Medicare for All’ universal healthcare plan (which Sanders advocated and Biden opposed). But Sanders cited ongoing work between the two camps on several policy matters, and the importance of defeating Donald Trump in November, as key reasons for backing Biden. His endorsement, however, did little to convince many of his progressive supporters.

Many progressive backers of the 2019/2020 Sanders campaign are not happy with the endorsement. Among them are staff members from that same campaign. For example, Briahna Joy Gray – the former national press secretary for the Sanders campaign – tweeted:

With the utmost respect for Bernie Sanders, who is an incredible human being & a genuine inspiration, I don't endorse Joe Biden.

I supported Bernie Sanders because he backed ideas like #MedicareForAll, cancelling ALL student debt, & a wealth tax. Biden supports none of those.

The support of a multitude of progressives hinges on Biden making meaningful concessions to the left — not just lip service — not merely symbolic overtures.

She explained her views further in an interview with the Hill:

Former Sanders speechwriter David Sirota, meanwhile, insisted that Biden needed to listen to progressives if he wanted to beat Trump. He wrote:

The best hope to defeat Trump is to positively and constructively motivate a large Democratic turnout. The best way to do that is to show progressive voters they are actually valued, rather than taken for granted. And the best way to show them that they are valued is to actually embrace an agenda that they want.

He also pointed out that this will require a change in attitude from the Biden camp:

To unify the party for the epic battle against Trump, Joe Biden and his supporters need to stop sneering at disaffected progressive Dem voters, and instead start courting them with better policies and with respectful, constructive rhetoric. This kind of shit has to stop. 👇 pic.twitter.com/uziwPbqCpa

He further emphasised that progressive pressure on Biden must continue until he starts to listen:

To those saying it's time to end pressure on Biden, I'll remind you that Biden without robust pressure is a politician who proudly helps the GOP crush Democrats.

Constant pressure will be necessary to force him to be a nominee who energizes Dem voters. https://t.co/1WnrapDRYV pic.twitter.com/9GQWOH5bSn

If Democrats are worried about this — and they should be — they should be screaming at Biden’s campaign to stop sneering at disaffected Dem voters and instead start embracing the agenda supported by a majority of those voters https://t.co/wiGizIzu1T

If Biden needs votes, he must earn them

Other Sanders backers also made it clear that Biden would have to earn their support if he wanted it:

What's "irresponsible" is giving away all of your leverage for absolutely nothing concrete. He could've handed a list to Joe of 10 executive orders and said "all of these or I'll walk". But. He didn't. ¯_(ツ)_/¯ https://t.co/CYtBUAjF0k

Dem voters: we want medicare for all and a green new deal!
Dem politicians: we will maybe lower medicare eligibility to 60 and introduce means tested green tax credits or something!

“Winning over @BernieSanders is one thing, but @JoeBiden shouldn’t think that the work is over,’’ said @evanlweber, political director for @sunrisemvmt.

“There is still work to do to win over progressive leaders and young people.” #EarnOurVotehttps://t.co/wf6JXDNlji

So talk to @JoeBiden. Help him understand: bold climate policy is critical to our generation’s future, and to our electoral support.

The bar is not low. Not just "better than Trump/Paris Accords". It’s “makes future generations proud of what we did here”. Again, your words.

In short, Biden and the Democratic establishment may see the Sanders endorsement as a massive victory. But left-wingers are making it very clear that the battle for progressive policies is far from over, and that the Democratic Party will have to earn their votes. If the Democrats want to beat Donald Trump in November, they’ll need to start listening.