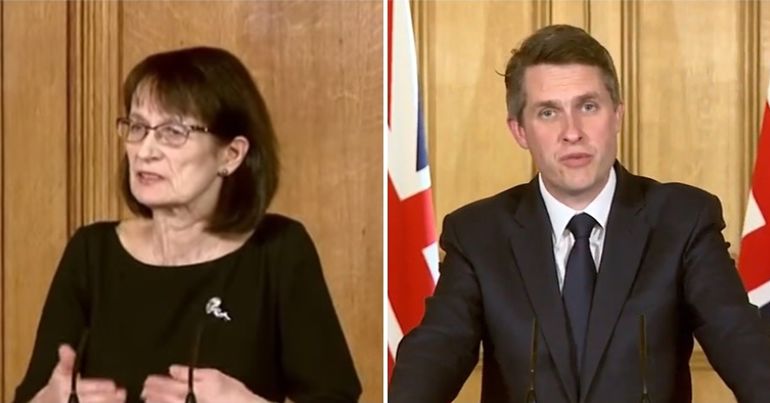 In response to a question from BBC health editor Hugh Pym about declining personal protective equipment (PPE) supplies in the UK prior to the pandemic, Harries said the UK “has been an international exemplar in preparedness”:

There was utter disbelief online, and it wasn’t the first time Harries’ comments have caused concern. It was also a tragic and fitting end to another week of botched government handling of this pandemic. At the time of publishing, the recorded death toll in UK hospitals has reached 16,060 people and the number of confirmed cases stands at 120,067. Former shadow home secretary Diane Abbott said:

Asked about chronic shortage of PPE, deputy Chief Medical Officer Jenny Harries says solemnly that UK was an “international exemplar in terms of preparedness.” Its a wonder she can say these things with a straight face #CoronavirusPandemic pic.twitter.com/8vcUyXWdpV

"The UK has been an international exemplar in preparedness." – Jenny Harries. 🤪 https://t.co/mSQxmds9Vo

Dr Jenny Harries, who said we didn't need to 'test, test, test' because we were a first world country, and that we didn't need to stop Cheltenham in March because there was no strong danger, today said we are 'an international exemplar of preparedness'.

In a very cutting tweet, one person compared her remarks to the sinking of the Titanic:

Regardless of the situation we are in now, the Titanic has been an exemplar of international maritime safety. pic.twitter.com/cHQ1kj6UkK

Not the only cause for concern

And it didn’t end there. Because Harries went on to say:

From my own professional perspective…we could perhaps have a more adult and more detailed conversation about PPE supplies.

She said the conversation now “quite rightly” focuses on gown supplies. But she said it’s important to remember:

that although there may be elements of distribution problems across the UK, at different times and in different places, this is a huge pull on services which we have never seen before. And we have managed actually, despite signalling many potential shortfalls, to continue to supply going forward.

And even as I stand here, I know with the gown position for example that even though when orders go in overseas, supplies may be very different what is received to what we think we are going to get. We have worked right across the UK to try and manage those supplies based predominantly and always on a risk mitigation method. So this is about whichever patient or whichever healthcare worker at highest risk across the UK requires those PPE.

And I think we perhaps need to, rather than lumping all of the PPE together which is not in a homogeneous mix at all, we just need to think carefully through what has been achieved and the challenges which are acknowledged ahead

It sounded like government-speak gobbledygook designed to look like something intelligible has been added to the conversation when nothing has been added at all. Because even as ‘she stood there’ the arrival of 400,000 surgical gowns from Turkey was inexplicably delayed. And NHS workers continuously report that they don’t have adequate PPE.

So people were demanding greater honesty:

International exemplar for not having PPE. Look, she just needs to be honest. If there is a genuine problem in supply, coupled with other world countries demanding PPE, than say it. On the other hand what is happening in the UK to repurpose factories to produce such equipment?

The deputy chief medical officer should not be in the business of putting out propaganda. https://t.co/XnmsmIJPTU

Sadly, Harries’ statements weren’t the only signs of government ineptitude. On 19 April, The Canary reported the investigation by the Sunday Times which exposed the government’s botched handling of the pandemic. The investigation explained that Boris Johnson missed five meetings of Cobra, the UK’s emergency council to deal with national crises, in the build-up to the outbreak.

The investigation also exposed that in January this year the government was treating the coronavirus like a flu pandemic. It’s said to have been “absolutely focused on herd immunity”. But additionally:

The investigation also inadvertently highlighted the role of the establishment media. Because, as The Canary‘s Steve Topple wrote, without the media’s help: “Johnson wouldn’t have been in charge during this in the first place”.

The position taken by the mainstream media during the last election put Johnson in power. But years of Tory austerity and neglect of the NHS made this crisis so much worse. It’s time to end the gobbledygook and ensure our frontline staff, and others in the UK, get the support they need.