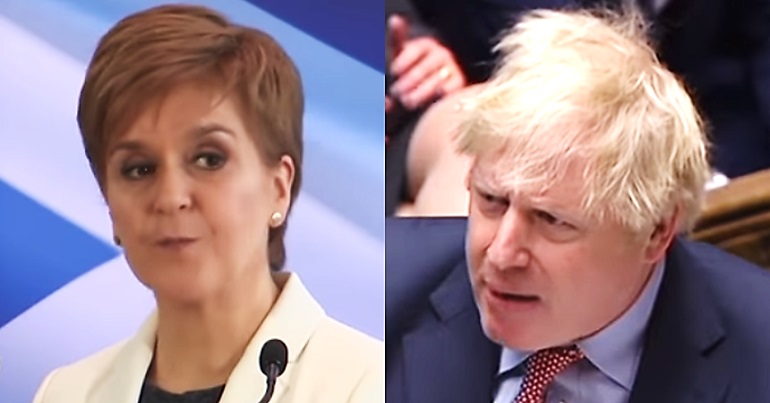 Just as Boris Johnson launched his contentious new coronavirus (Covid-19) slogan, Nicola Sturgeon blew the whole thing wide open with a single tweet. Because she exposed that, far from being “better united”, the Tory-led Westminster government was dancing entirely to its own tune.

On Sunday 10 May, Twitter was awash with the Westminster government’s new coronavirus ‘advice’. Previously, the slogan that’s been drilled into the population’s psyche was “stay at home, protect the NHS, save lives”. But now, it’s evolved into something quite peculiar.

As The Canary reported, the government says we’ve all now got to:

But the latest advice hasn’t gone down well on social media. SNP Westminster group leader Ian Blackford perhaps summed up many people’s feelings about the re-branding the best:

#stayalert. What kind of buffoon thinks of this kind of nonsense. It is an invisible threat. Staying alert is not the answer #StayHomeSaveLives is. pic.twitter.com/zCRhjfpXx2

But it was something his boss tweeted which was possibly the most interesting aspect of the furore.

The Sunday papers is the first I’ve seen of the PM’s new slogan. It is of course for him to decide what’s most appropriate for England, but given the critical point we are at in tackling the virus, #StayHomeSaveLives remains my clear message to Scotland at this stage. https://t.co/zrnEgTC15H

‘Better together’, all over again

On 7 May, Welsh secretary Simon Hart issued a long statement via the Western Mail. It was essentially an ode to ‘the union’ off the back of VE Day. Hart cooed that, in the face of both WWII and coronavirus:

if there is one thing that these crises have shown us throughout our shared history, it’s that the nations of the United Kingdom are at their strongest when they work together.

You’d be forgiven for thinking “work together” has a certain, familiar ring to it. You can almost hear the chants of “better together” from the unionists during the 2014 Scottish independence referendum campaign.

Hart continued by saying the four nations apparently accepted there’d be some “divergence” in each country’s approach. But overall, he thought:

the pandemic response has been marked by joint decision-making and collaboration between the UK Government and the devolved administrations.

This is the approach that a crisis dictates, and it is the level of grown-up politics that the public demands.

Now, Sturgeon has revealed that this is an absolute load of rubbish. But the Westminster government’s ‘we’ll do what we want but pretend we’re all working together’ approach to the crisis was already becoming clear.

Under strain from colonial hangovers

The Guardian reported on 6 May that the “strain” on the devolved nations’ relationships with Westminster was already starting to show. At that point, both the Welsh and Scottish governments were claiming that Johnson had not shared his ‘leaving lockdown’ plans for England with them. Sturgeon’s spokesperson told the Guardian:

If you have any constituent parts of the UK moving in a direction before other parts are ready, then that really undermines the whole ethos and intention of a four nations approach

Yet despite this, Johnson’s government has gone ahead and undermined Sturgeon’s, anyway.

This ‘do as I say, not as I do’ attitude from Westminster to the other parliaments is endemic of the colonial hangover the Tories have. But with Sturgeon exposing this inherent disrespect from the PM, more strain has now been added to their already troubled relationship. ‘Better together’, hey.