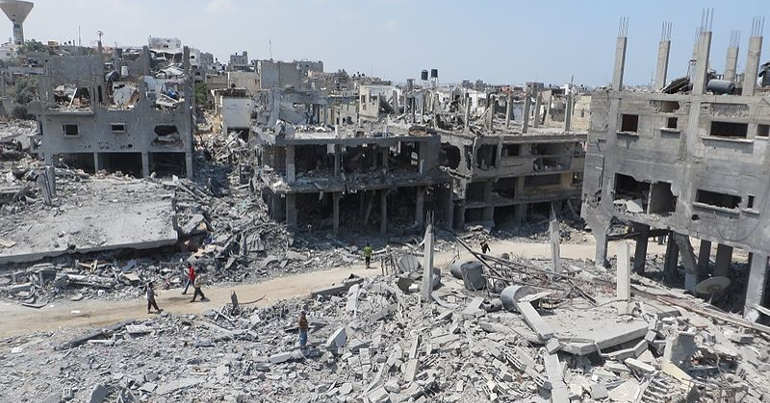 63 Jewish people, including comedian and writer Alexei Sayle, have lodged a formal complaint against a charity. They argue that the Jewish National Fund UK (JNF UK) has funded activities that violate international humanitarian laws, including the 2014 military assault on Gaza. The signatories state that the charity misleads the public in its fundraising material and breaches fundraising codes.

Michael Kalmanovitz is one of the signatories. He is part of the International Jewish anti-Zionist Network UK, an organisation which co-founded a campaign called Stop The JNF. He told The Canary:

The Jewish National Fund (JNF), founded in 1901, is now key to Israeli apartheid. Through the Israel Land Authority, the JNF controls 93% of state land exclusively for persons of “Jewish nationality“, “in perpetuity“, in other words, permanently excluding Palestinian people from land that has been either bought under false pretences or stolen from them.

JNF UK claims to be “Britain’s oldest Israel charity“, and “every penny raised by JNF UK is sent to a project in Israel.” The charity gives people an “exciting opportunity” to plants trees in Israel to mark special occasions, such as births. This is ironic given the JNF actively plants forests over the remains of ethnically cleansed Palestinian villages.

The JNF’s forests and parks, including the British Park, have been planted and built on the ruins of hundreds of destroyed and depopulated Palestinian villages, in an attempt to (literally) cover up all traces of the ethnic cleansing of Palestine. Notoriously, in 1967 after the ‘six-day war‘ the JNF boasted, “the JNF tractor follows in the wake of the army tank”.

JNF UK’s current focus is to pour money into projects in the “impoverished” Negev region, which makes up 60% of Israel’s land. The JNF’s Blueprint Negev has a goal of relocating 500,000 people to the region.

In their complaint to the Fundraising Regulator, the 63 Jewish campaigners argue that:

JNF UK’s involvement in the Negev is political and aimed at forcibly displacing its Bedouin population, one of the most neglected and poorest communities in the region.

The Negev’s Bedouin population has inhabited the region for thousands of years. But when the Zionist state of Israel was established in 1948, most Bedouin people were forced off their land, and many became refugees in Jordan, the Sinai, Gaza, and the West Bank.

Despite JNF UK’s claim that the Negev is now “largely unpopulated“, there are currently around 230,000 Palestinian Bedouin people living in the region. Around 150,000 of this population live in 37 villages which aren’t recognised by the Israeli state. Residents have few rights and aren’t even provided with sewage systems, electricity, or water. The Israeli state continually attempts to displace people by demolishing their homes.

The Negev community of al-Araqib was first displaced in 1951. Residents returned to their land in 1998, fearing that the JNF was going to plant a forest over the land and erase the community off the map for good. The residents continue to remain steadfast. Their village has been destroyed by the Israeli state 176 times. Each time, the villagers rebuild.

Charity Commission apparently considers contributing to the Israeli army’s actions in Gaza, to come within the framework of a charitable act that serves the public good. We make this point on the assumption that the JNF UK’s annual accounts have been audited by the Charity Commission as part of its regulatory responsibility.

“Apartheid is not a charity”

The signatories are requesting that the Fundraising Regulator investigates JNF UK. Kalmanovitz stated:

Activists are campaigning in a number of countries to de-register the JNF as a charity: apartheid is not a charity.