In Donald Trump's racist US, a Black journalist is arrested for doing his job - Canary 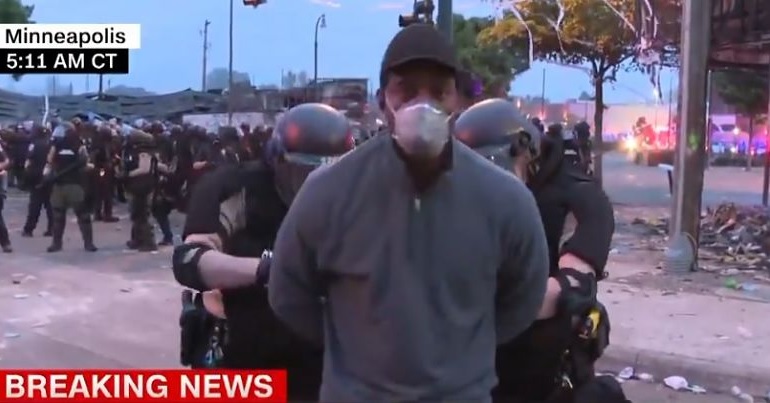 A Minneapolis police officer killed an unarmed Black man on 25 May. Since the killing of George Floyd, there have been protests and CNN sent reporters to cover the protests on 29 May. While there, police rounded up the news crew – including its Black correspondent Omar Jimenez – and arrested them.

Such is the state of Donald Trump’s ‘land of the free’. Agents of the state, i.e. the police, use excessive force against unarmed Black people. Those agents, usually white, also kill Black people. And now, a Black reporter trying to document the unrest that outrageous violence causes, has been arrested.

Floyd died in hospital on 25 May after an officer pinned him to the ground with his knee in the Black man’s neck. Floyd told Derek Chauvin he couldn’t breathe multiple times. That made no difference. Detroit’s police chief James Craig says Chauvin should be arrested for murder. But, although Chauvin and the officers with him at the time have lost their jobs, prosecutors haven’t yet decided whether to charge them.

Protests against the killing have taken place in numerous states, including Minneapolis. CNN correspondent Jimenez and his team were reporting from the latter on 29 May when the police arrested them. As such, the arrest was caught on camera:

Jimenez can be clearly heard in the video asking the police where they would like his team to move. He also clearly identified his crew as a news team. As he continued to try and report while they awaited instruction from the police on where to move, the officers arrested him. They then arrested other members of his crew. Later in the video of the incident, one of the CNN reporters back in the studio said the police claimed they arrested the crew “because they were told to move and didn’t”. The same reporter earlier said:

The crew has since been released.

….These THUGS are dishonoring the memory of George Floyd, and I won’t let that happen. Just spoke to Governor Tim Walz and told him that the Military is with him all the way. Any difficulty and we will assume control but, when the looting starts, the shooting starts. Thank you!

There’s a distinct disconnect between how Trump addresses citizens who protest depending on their skin colour. For example, on 1 May, the day after mostly white armed protesters fired rifles in the air, and a senator and her colleagues were forced to work in bulletproof vests, Trump tweeted:

These are very good people, but they are angry. They want their lives back again, safely! See them, talk to them, make a deal.

Now, he’s labelling the crowds protesting Floyd’s killing as “THUGS” and threatening to gun them down.

Meanwhile, police are arrested a Black reporter in Minneapolis, while giving a white reporter from the same news outlet the utmost respect:

A black reporter from CNN was arrested while legally covering the protests in Minneapolis. A white reporter also on the ground was not. https://t.co/GcfwEvyYQC pic.twitter.com/Mg4ZwKIuKt

The US has long had a major problem with racism. Trump proudly wears that racism on his sleeve. We stand in solidarity with the Black journalists now getting caught in that web of prejudice. We also stand with the people of colour across the US, including those who have unnecessarily lost their lives because of excessive police violence.