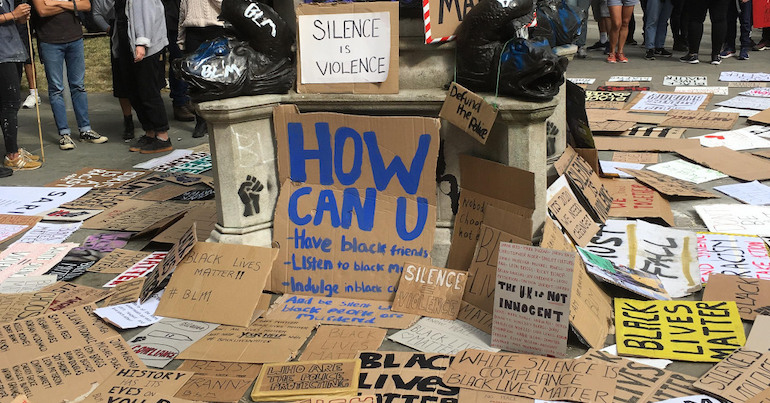 On 7 June, Black Lives Matter protesters in Bristol tore down a statue of Edward Colston – a slave trader. This was a hugely symbolic and important action. But, amplified by BBC Radio 4, the establishment stepped in to whitewash the power of this moment.

Since police in Minneapolis killed George Floyd, people around the world have taken to the streets to protest against years of systemic and institutional racism.

In Bristol, people had long called for the removal of the Colston statue that’s been in place since 1895.

In Bristol, demonstrators pulled down a statue of the 17th Century philanthropist and slave trader, Edward Colston, and threw it in the harbour.

This echoes Historic England’s rationale for the statue’s listed status. It calls Colston:

Bristol’s most famous philanthropist, now also noted for his involvement in the slave trade.

A point the Guardian repeated after the statue came down.

The important truth is, that Colston’s wealth – and any so-called ‘philanthropy’ – came entirely from slavery profits. He was “deputy governor” in the Royal African Company. This had “a monopoly” on England’s slave trade. He profited further from selling sugar “produced by slaves”.

According to Operation Black Vote, a 2014 article explained that:

Between 1672 and 1689, Colston’s company transported around 100,000 slaves from west Africa to the West Indies and America. This included women and children as young as six – each slave was branded with company’s initials, RAC, on their chest. To maximise profit, Colston’s ships divided their hulls into holds with little headroom, so they could transport as many slaves as possible. Unhygienic conditions, dehydration, dysentery and scurvy killed more than 20,000 slaves during the crossings, their bodies thrown overboard by the vicious sailors

Many people amplified the horror of Colston’s legacy on Twitter:

Slaves taken from their homeland by Edward Colston: 84,000

Slaves on Edward Colston’s ships, who died in transit and were thrown into the sea: 19,000

Racists: “It’s absolutely outrageous that protestors threw a statue of Edward Colston into a river!” pic.twitter.com/IaFYMhBXNX

Edward Colston ran a company that shipped 84,000 kidnapped African men, women & children to the Americas – 19,000 of these are estimated to have died during the crossing.

He was a mass murderer as well as a slave trader.

The statue in Bristol should have come down years ago. pic.twitter.com/1i6xtUCMSm

Doubling down on racism

Since protesters tore down the statue, the establishment has doubled down on its racist response. Home secretary Priti Patel called the action “utterly disgraceful” and vowed to seek prosecution. The Mail amplified her opinion further:

These demonstrations have been subverted by thuggery.

Nice use of thuggery there. Another word looted from India. History is present in all that we do! https://t.co/dKIqJo5mw8

There’s little hope of any meaningful response from the opposition either. Labour leader Keir Starmer said:

It shouldn’t be done in that way. Completely wrong to pull a statue down like that.

Although he acknowledged: “You can’t, in 21st century Britain, have a slaver on a statue”, he insisted it:

should have been brought down properly with consent and put, I would say, in a museum.

To say that politicians have misread the justified power and anger these protests is a vast understatement.

I think the home secretary has shown a lack of understanding about where the country is right now. I would love to hear some outrage about the 25% of kids in my city who live in poverty, the growing inequality, the deaths in custody both here and in the United States, the militarisation of US streets, the Windrush scandal. You can’t be selective in your outrage.

"I think the home secretary has shown a lack of understanding."

The Mayor of Bristol, @MarvinJRees says "you can't be selective" with outrage and calls for more perceptive from the government.#KayBurley
Get more here: https://t.co/txIrZ3LvSd pic.twitter.com/7w2kvCCICX

And Rees’s sentiment is echoed by many other people. Removing Colston’s statue marks a powerful turning point in these protests:

we ought to topple every statue of a slaver, & rename every street, square, park & public building named in tribute to one.
this country needs to quit celebrating these evil men who brought such misery, suffering & violence to the world.#ColstonHasFallen pic.twitter.com/gOjSb59CXK

"Statutes aren't about history they are about memorialisation. They are about saying this is somebody we should revere. The statue says hes a wise and virtuous son. He's not wise, he's not virtuous he's a killer".
David Olusoga #ColstonHasFallen https://t.co/W80IL8jehv

Those arguing that bringing down a statue of a slave owner is 'wrong because it's illegal' would have been up there arguing slavery itself was 'right because it's legal' back in the day.#ColstonHasFallen

The British media is trying soo hard to tell the world that the U.K. protest is strictly because of #GeorgeFloyd To deflect from the fact that there is police brutality & prejudice as well as institutional racism against black people in the UK.

The establishment may try to whitewash the truth about Colston and attempt to criminalise those who took part in this powerful action. But they only show their deeply ingrained racism and ignorance in doing so. The global uprising against the horror of systemic racism won’t listen any longer. Power is rising. White people are learning to acknowledge their privilege and stand in full solidarity with their Black brothers and sisters. And until there’s true and lasting change, that won’t stop.