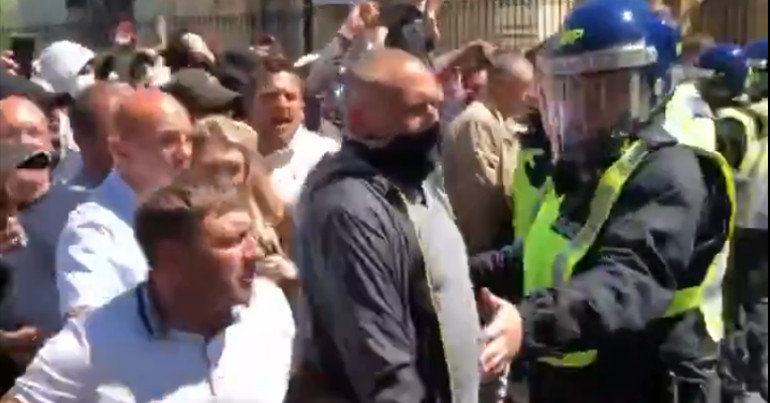 Hundreds of racists turned up in London on 13 June to counter-protest a Black Lives Matter (BLM) demonstration. As they became violent towards anti-racist protesters and police, one person called them “the British KKK”.

The BLM march was officially called off because of concerns that it would be attacked. Witnesses claim that some people present were doing Nazi salutes and shouting “heil Hitler”:

Does anyone else find it 'ironic' that some people that think nothing of throwing Nazi salutes would be surging on London to 'protect' the statue of the person many people think defeated Hitler!

Call them what they are.

After singing the national anthem at the Cenotaph, the crowd appeared desperate to engage in violence. Journalists were attacked and videos show right-wing protesters attacking the police:

Far right thugs, emboldened by their pin up boy Boris Johnson, attacking police. This is what happens when you vote a man into office who has not only said many racist things, but who has declined any opportunity to apologise for them pic.twitter.com/MpLRj3SLDM

Apparently, the crowds had gathered to protect London’s colonial statues from being vandalised after anti-racist protesters drowned a statue of slave-trader, Edward Colston, in Bristol harbour on 7 June. But the state had already protected several monuments and had even pre-emptively boarded up a statue of Winston Churchill.

The far-right wasn’t just there to protect their monuments:

Imagine putting on your Stone Island, your kids ask if you're going to the football. You tell then no, you're off to guard a statue of an 18th century murderer.

“Let’s call them for who they really are”

While some of the crowd called themselves the Football Lads, anti-racists are keen to point out what they really are. One person said “they’re literally the British KKK”:

the people "protesting" in London aren't “Football Lads” lets call them for who they really are. they're literally the British KKK. white supremacists interested in nothing but the preservation of white power & causing violence wherever they go for the sake of it #farright

Videos on social media showed the extent of the white, right-wing violence:

If the police had smashed a few BLM skulls on day 1, this wouldn't be taking place

London isn’t the only city seeing these so-called ‘protection groups’ taking to the streets. Smaller numbers of racists paraded in the streets of Newcastle and Brighton too:

5 possibly 10,000 in #Brighton for #BlackLivesMatter march.
On the left, 50 fash "guarding" the war memorial 😆 pic.twitter.com/fdm86EcQoL

Since the BLM protests began, the far-right has also taken to the streets in Plymouth. Jacob Goldberg, a Plymouth anti-fascist, told The Canary:

Anyone with sense could have foreseen what happened in London today. As we exposed in Plymouth last Sunday, these ‘protection groups’ are full of far-right activists hiding behind a veneer of respect for the fallen. It’s clearly a charade – why else would they go around doing Nazi salutes in their spare time?

The fact is, what we’re seeing in Plymouth and London are just days out for the far right – drinking and shouting racist, sexist abuse.

It’s down to us – we all have to speak out against their lies, and stand up to their intimidation.