Churchill's grandson says the war leader wasn't a racist. But the excuses are wearing thin. - Canary 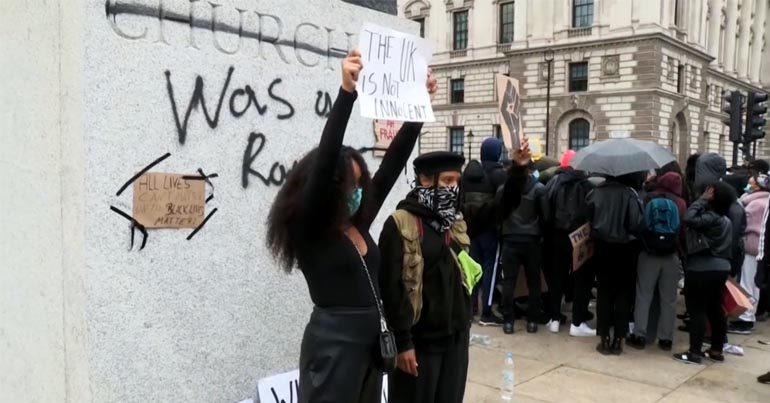 Winston Churchill’s grandson and former top Tory Nicholas Soames told LBC that he was “deeply shocked” to see the war leader’s Westminster statue boxed up. Soames defended Churchill’s legacy by saying he was a ‘saviour of the Western world’ and rubbished claims that Churchill was racist. But we’re living in an age of rapidly expanding awareness about Britain’s colonial history. And people are showing that these lies are wearing thin.

The old ‘man of his time’ excuse

Soames’ defence of Churchill rests on the often repeated idea that the wartime prime minister was a man of his time, telling LBC that:

When he was younger, [Churchill] may have said things that we certainly wouldn’t say today but he was an Edwardian soldier and politician so you have to take people in the whole.

Soames also claimed that opposition to his grandfather is the result of an “abominable” history curriculum. Rather than judge his flaws, Soames says people must judge Churchill by his victories – including the defeat of Nazi Germany.

Senior Tories condemned the action. This included Johnson, who took to Twitter to defend the former Conservative leader on the grounds that he was a man of his time. But the Black-led changing of public consciousness means people are now exposing the faults in these opinions.

“This is what colonial education does”

One person turned one of Soames’ arguments inside out by pointing out that defeating Nazi Germany doesn’t change Churchill’s racist views:

It is not condemning him for his leadership during WW2, it is getting people to recognise he was a racist when it came to black and Asian people.

And other people pointed out the hypocrisy of Soames’ statement:

So on that basis Hitler should be judged on the rebuilding of Germany into a super power rather than the holocaust? He really didn’t think this through did he? 🤦‍♂️

You can be an anti-fascist war hero and a colonising so-and-so at the same time. The two aren't anti-thetical.

And also recognise that the contribution of the colonies to the WWII efforts are largely erased from history. They were an integral source to financing war efforts.

Many others went on to highlight that Churchill had more than ‘some’ racist views:

https://t.co/D6KlSmfKOD
Soames needs to read this.

Who says Churchill is racist🙄 pic.twitter.com/knHaj7bmj0

In February 2019, John Ranson wrote for The Canary that:

The time will come for a wholesale re-evaluation of Churchill. In all probability, he’ll be filed alongside Colston and many other famous figures we gradually learned were awful

Now is the time. While this is far from the first time people have attacked Churchill’s statue, it hadn’t yet happened in the context of a Black-led resistance. Moreover, people are focusing not on Churchill’s personal views but on the policies and decisions he made as prime minister. Racism is a systemic problem. Churchill’s personal views pale in comparison to the impact his actions had on people, communities, and nations of non-white peoples.