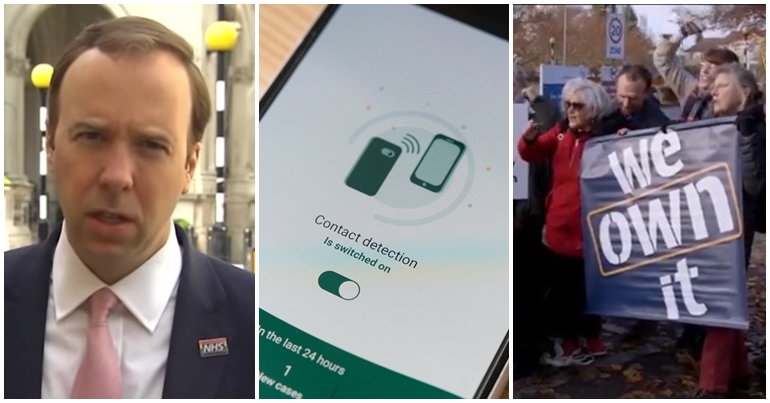 Serco is one of the main companies contracted to deliver the NHS’s coronavirus (Covid-19) contact tracing system. However, it has already admitted that it’s unlikely this system would “evolve smoothly”. This is one of the reasons why campaign group WeOwnIt is calling on health secretary Matt Hancock to:

The group is also unhappy with Serco’s track record of handling other sensitive government contracts, describing this handling as “abysmal”. So it’s launched an online petition to end Serco’s involvement in this system.

On its website, WeOwnIt says it supports the use of contact tracing to help society get out of the current lockdown safely and save lives. It stressed:

Contact tracing is vital if we’re going to get out of lockdown safely, hug our loved ones again and save lives.

But instead of putting local public health experts in charge, health secretary Matt Hancock has handed over responsibility to Serco – a private outsourcing company that has already put lives at risk.

It has now been revealed that Serco’s CEO said he hopes it will ‘cement the position of the private sector’ in our NHS. Don’t let him get away with this.

WeOwnIt opposes Serco’s role in this scheme as it says Serco has “a shocking track record as a company”. It highlights the revelations in the Guardian where a leaked email stated that Serco CEO Rupert Soames admits he doubts the scheme “is going to evolve smoothly”.

As a result, We Own It wants the contact tracing scheme handed over “to local public health teams who have years of experience in contact tracing”. The campaign group goes on to explain:

So it launched this online petition to pressure Hancock to end Serco’s role in contact tracing. The Canary contacted WeOwnIt for further comment. A spokesperson said:

Our position is that we’re opposed to all privatisation of public services – including in the NHS – so, in short, yes – we’re opposed to Serco’s involvement in the system because it’s a private company.

Serco was forced to pull out of a contract to provide out-of-hours GP services in Cornwall after it emerged that the company had been falsifying data and that it had a ‘bullying culture’ which discouraged whistleblowing in the interests of patients.

Contact tracing is a way of identifying who has been in close contact with people who have coronavirus. This then allows us to know who may be at risk of catching it. It’s a vital tool for fighting the pandemic and “a crucial part of the three-pronged plan for returning the world to normal: test, trace, isolate”.

The World Health Organisation (WHO) supports the use of contact tracing. It states:

The Canary contacted Serco for comment but it had not responded by the time of publication.

At the time of going to print, the online petition had gathered around 24,000 signatures. Campaigns officer at WeOwnIt Pascale Robinson told The Canary:

Whenever Serco is found in our public services, chaos follows. So much so that they have been fined millions of pounds in their handling of government contracts – whether that’s for charging the government for tagging people who turned out to have left the country or to have died, or for failure to maintain property standards in accommodation for refugees.

Serco should have no role whatsoever in the coronavirus response. It has proven time and time again that it is utterly unfit to run our public services. The government must scrap its contract with Serco, and put local public health teams and local health services back in charge of track and trace.