Solidarity is vital. Here's why The Canary is going Green for Grenfell. - Canary 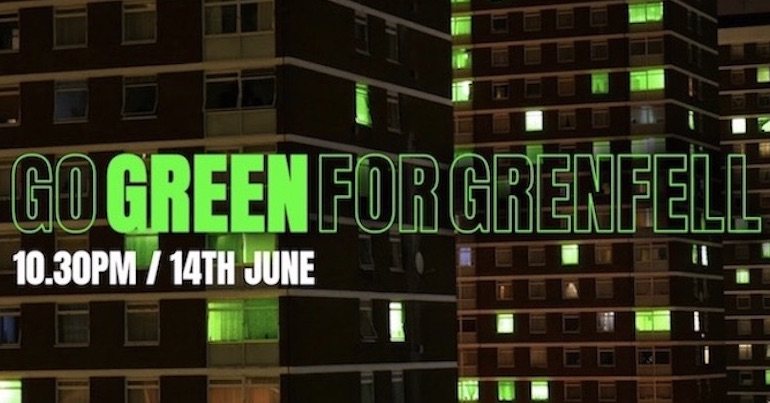 On 14 June 2017, a fire at Grenfell Tower killed 72 people. Three years later, bereaved families and survivors still don’t have answers, meaningful change or justice. And amid the ongoing coronavirus (Covid-19) pandemic and growing protests against the UK’s systemic racism, this anniversary is acutely poignant.

This year, the anniversary won’t take place on the streets. Campaign group Grenfell United have called for people to “remember, reflect and unite” from home on 14 June. People are invited to:

This Sunday, 14th of June 2020 marks 3 years since Grenfell. We ask you to join us from home to remember, reflect and unite for Grenfell.💚 #UnitedforGrenfell #Grenfell pic.twitter.com/CoqomJr2bg

A series of online, multi-faith memorial events are also honouring the anniversary:

These events are hugely important to honour the bereaved, survivors and the community. Three years on, they are no closer to justice. Actions of the Conservative government and corporations linked to the fire have been appalling.

Despite the enormity of this tragedy, bereaved families and survivors need our support more than ever three years on. Because the establishment has failed – and continues to fail – them and thousands of other people. As Jeremy Corbyn explained, the Tories’ lack of action also threatens 56,000 more lives:

It's a national disgrace 56,000 people are still at risk from flammable cladding three years on from #Grenfell

As @ukcag say, this is 56,000 living in fear for their lives every single day

The time for platitudes and promises is over – we need action nowhttps://t.co/kYOrxIvLNI

And the tragedy of Grenfell also epitomises so many aspects of the UK’s systemic racism:

If Grenfell victims were predominantly white- I’m telling you, someone woulda went to jail along time ago, that sh*t happened in a ROYAL borough… IN 2017.

When a Prime Minister displays fury that a statue is covered up in case it gets defaced yet ignores a tower block that is still covered up three years after being set on fire, killing seventy-two people, it comes as no surprise that there is trouble in the streets.#Grenfell

The “crimes of the powerful” can’t be hidden any longer:

So called "Grenfell fraudsters" have received more scrutiny from the media than the companies responsible for the cladding on the building.

Crimes of poverty are potrayed as unforgivable whereas crimes of the powerful are shrouded in bureaucracy to the point of invisibility.

On 14 June, we will be releasing a number of stories, including a video interview with activist and rapper Lowkey, to honour the anniversary.

With love and in solidarity for everyone involved in the tragedy, The Canary is Going Green for Grenfell.