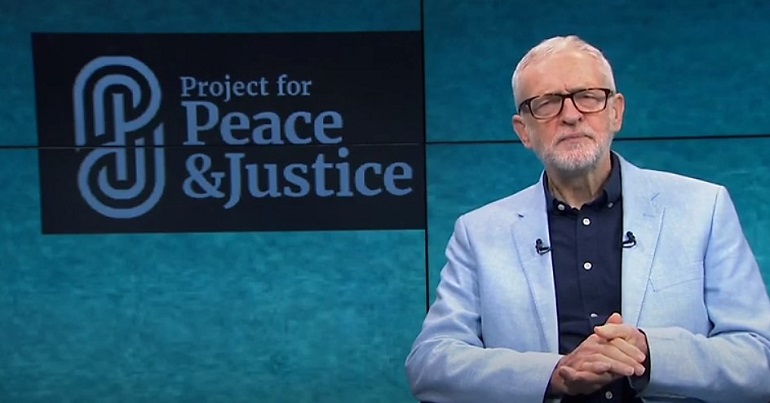 The wait is over. The announcement Jeremy Corbyn was due to make on Sunday 13 December at 2:30pm has been revealed. He’s launching a new, global initiative. And you can get involved too.

The Project for Peace and Justice officially went live on Sunday 13 December. It says its mission statement is:

To bring people together for social and economic justice, peace, and human rights, in Britain and across the world.

The Peace and Justice Project will back campaigns, commission reports and develop progressive networks in Britain and across the world.

[It] will work with labour and social movements and provide platforms to those campaigning for change for the many, not the few.

It outlined specific areas it will be working in:

Overall, the Project for Peace and Justice will:

combine analysis, campaigning and networking. It will shine a light on injustices, offer space and hope to those driving change, and generate ideas for a future that works for the many, not the few.

If you’re a like-minded individual to Corbyn, what’s not to like?

He said of the new project in a statement:

We need to build solidarity beyond our borders, and across communities, to solve our common problems together.

The Peace and Justice Project is there to create space, hope and opportunity for those campaigning for social justice and a future that works for the many, not the few.

We will work with unions and social movements to build a network of campaigners, grassroots activists, thinkers and leaders, to share experiences and generate ideas about solutions to our common problems.

We will combine research and analysis with campaigning and organizing.

And we can build on the popular socialist policies developed in the Labour Party over the past five years.

That’s just a taster. This project won’t be a substitute for any other campaign or organization. It will be a resource and a platform to work together for progressive change.

In January I’ll be able to say more, when we have our launch. I’ll be joined by some fantastic campaigners – that means you.

Before we go, sign up to our launch event now, the information is just about to come on the screen.

I hope we’re going to build something important together. This year, many of us have felt powerless in the face of forces beyond our control. It doesn’t have to be like that.

Things can, and they will, change.

The Eventbrite page for the official launch on 17 January 2021 says the project will be:

There may be some disappointment that Corbyn hasn’t launched a new political party in the face of the continuing demise of the Labour Party. But what this new project will hopefully do is work beyond political party lines and foster cooperation and change outside of established democratic processes. And that surely must be a good thing.

Featured image via the Project for Peace and Justice – YouTube