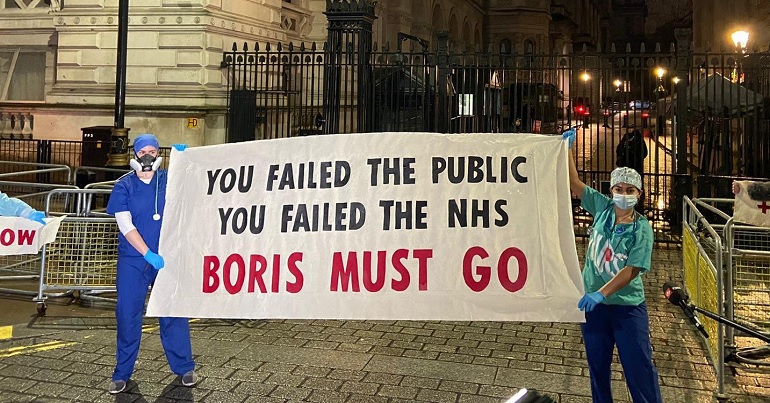 A group of NHS staff just gave a direct message to Boris Johnson: it’s time for him to “go”.

On Thursday 14 January, a group of NHS workers held a demo outside Downing Street. They did it to coincide with the once again weekly ‘Clap for Carers’ nationwide vigil – at 8pm. The group, NHS Workers Say No, organised the demo. It said that:

The NHS workers are demanding accountability from this government and a funding boost for the NHS to help them cope with the worsening pandemic and repair the damage this government’s lack of leadership has caused to morale and staffing.

The group also noted that:

With thousands of people now dying daily and a vacancy rate of 15% across London the frontline workers are demanding that action is taken to protect our staff and our loved ones.

Indeed, the situation in London alone makes for difficult reading.

Earlier in the month, mayor Sadiq Khan declared a major incident in the capital. More than 10,000 people have now died from coronavirus in London. The NHS has asked the military to help in some of the capital’s hospitals. And some hotels are even taking in recovering coronavirus patients as some hospitals have run out of room.

So, NHS staff took their concerns direct to Johnson’s door:

These are the faces of exhausted #NHS workers protesting against cuts the healthcare at Downing street tonight after their shifts. Boris didn't come out to clap for them… pic.twitter.com/j4dZZ60zPd

We’re stressed out and very anxious, there’s a lot of PTSD amongst staff, staff are going off sick… leaving nurses very short, which increases the risk of patients deteriorating and ultimately patients dying.

Down the rabbit hole

This is the Government’s fault, they need to take responsibility, they need to provide us with better pay and better working conditions.

It’s 8pm, it’s Thursday, it’s Clap for Carers, whilst we appreciate the claps that the public are doing and some of them are staying at home, we do not appreciate our Government clapping for us because essentially they are the reason why we are in this position.

But some of the responses to the protest on Twitter also show the chaos the Tories have created in society more broadly. Because despite the desperate situation the NHS, its staff and patients are in, people are still openly questioning the authenticity of the crisis – even hurling insults about nurses like Sheikh.

At a time when the NHS and its staff are already under incredible strain – the last thing they need is Johnson. But moreover, they also don’t need a hostile public parroting conspiracy theories and blaming the very people charged with caring for them.

We were already down the rabbit hole. Now, some people’s attitude towards the NHS has taken us into a full-blown Mad Hatter’s tea party.