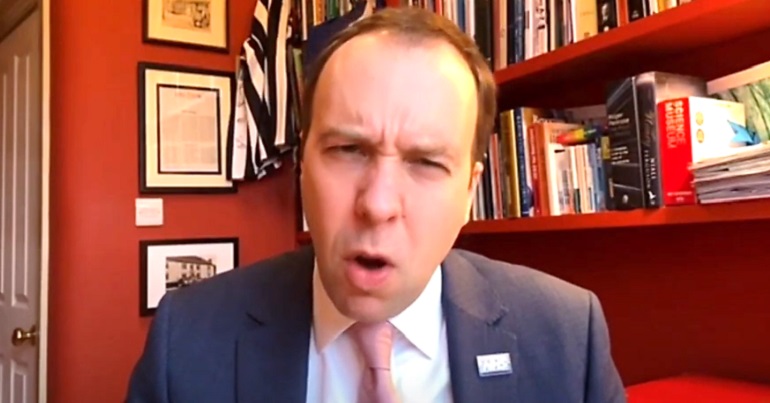 Matt Hancock’s arrogance seems to know no bounds. Because on Sunday 24 January, he lied about the UK’s vaccination programme, live on TV. But to make matters worse, a doctor immediately called out his untruth just moments later – on the same show.

Sky‘s Sophy Ridge on Sunday was being presented by Stephen Dixon. This was due to Ridge herself testing positive for coronavirus (Covid-19) and self-isolating. Dixon had the unfortunate duty of having to interview health secretary Hancock. Much of the establishment corporate media ran with his views on the current lockdown. Sky News itself reported:

It is still a “long, long, long way” before coronavirus cases are low enough for lockdown to be lifted, the health secretary has told Sky News.

But it was his comments on the current vaccination programme that should have really raised eyebrows.

As of this morning, three-quarters of all over-80s in the UK have been vaccinated.

We’ve vaccinated more people in just the last three days than France has in the history of this disease. pic.twitter.com/OkiaYuGMk4

Has the NHS “vaccinated” over five million people, including three quarters of over-80s? The short answer is no: Hancock was trying to be clever with words. And just after his interview, a doctor called him out – also live on Ridge.

Dr Rosie Shire from the Doctors’ Association UK told from the tweet below] Dixon:

It’s really important just to mention here that we’re hearing a lot of statistics about three quarters of over-80s have been vaccinated. Well actually, no – they haven’t been.

Three quarters of over-80 year-olds have received their first dose of the vaccination. And they’re not going to be fully vaccinated until they’ve received that second dose. And if they’ve had the Pfizer vaccination, we don’t know if they are going to be fully vaccinated when they receive the second dose, because that schedule has been changed from what was studied and what was licenced.

Dr. Rosie Shire(Doctors' Association UK) – We hear the government say that three-quarters of the over 80s have been vaccinated… they haven't been… they've only received the first dose… they won't be fully vaccinated until they receive the second dose.#Marr #Ridge pic.twitter.com/mwnHuMTYbN

It seems Shire may have heard what Hancock said just before she came on. Because it looked like she was calling out his claim directly.

But a Tory attempting to be clever with their use of words to make them and their government look better isn’t exactly new.

The Canary recently reported on Northern Ireland secretary Brandon Lewis saying the Tories’ response to the pandemic had been “led by” the science. In other words? Blame the scientists and medics if it all goes wrong. But he was at odds with Cabinet Office minister Michael Gove, who said in December the science “informed” the Tories.

Clearly, Tory ministers thinks they can play fast-and-loose with semantics to make themselves look better. But to anyone watching, it’s obvious that all they’re doing is trying to deflect criticism, and sometimes responsibility, for their own catastrophic handling of this crisis.