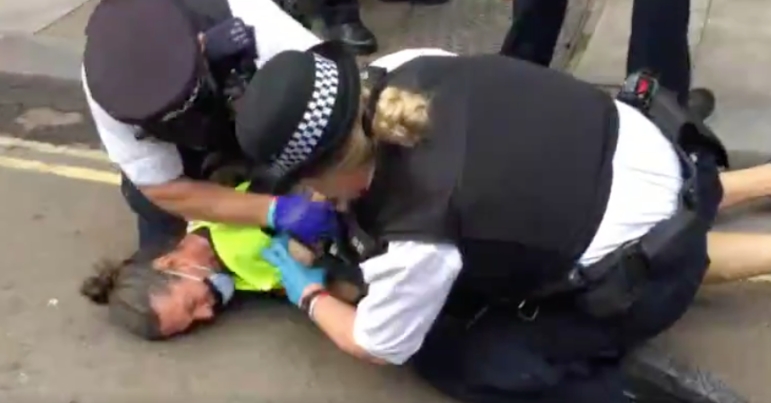 Palestine Action co-founder Richard Goddard was arrested for blackmail on 3 February, just days after the group launched a joint action with Extinction Rebellion that shut down the premises of Israeli arms firm Elbit Systems.

The arrest, which was filmed, took place at around 3pm and Goddard was taken to Fresh Wharf Custody Base, London. Both he and co-founder Huda Ammori reportedly had their passports seized during the raid. Palestine Action has accused the police of ‘harassment’:

In a statement, Ammori said:

The only thing we can assume this is about is [Palestine Action] demanding that companies do not associate with war criminals, and if they do we will take action. This is not blackmail. This is asking for companies to abide by International Law and Human Rights Conventions.

This is just another extension of harassment by the police. We will not be deterred by police harassment; we will only grow stronger and call on everyone to join us in forcing war criminals out.

As The Canary previously reported, Palestine Action was set up in 2020 and has carried out numerous actions against Elbit Systems because it is:

Israel’s largest private weapons manufacturer. It is responsible for manufacturing a majority of the drones used to drop bombs on Palestinians in Gaza, and owns IMI Systems. IMI is the sole supplier of small calibre ammunition to the Israeli army, who use it in their violent military occupation of Palestine.

UEL [a factory owned by Elbit Systems] is accused of manufacturing engines for the Hermes 450 drone. The Hermes 450 is one of the drones which Israel has used to fire missiles into the Gaza Strip.

According to The Intercept, a Hermes 450 was deployed during an attack that killed four boys from the Bakr family during Israel’s assault on Gaza in 2014.

Palestine Action is calling on people to take action over the arrest:

Join the protest at the police station, join us; donate; don't do nothing; we have to make a stand for the sake of humanity – https://t.co/1q0pkJxH5I pic.twitter.com/Ajiwywclz1

Goddard’s arrest is just the latest action taken by the police against Palestine Action activists. This has included using counterterror laws and house raids.

Palestine Action is being targeted for taking action against an arms company. It’s down to all of us that we stand in solidarity with those facing repression for trying to stop this murderous trade.