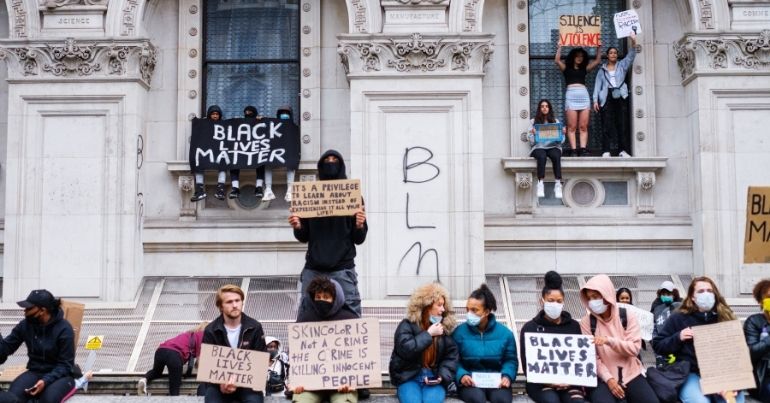 Black Lives Matter UK has announced the first 14 organisations to receive grants from its fundraiser following mass protests sparked by the killing of George Floyd by police in 2020. The group managed to raise £1.2m, half of which will be allocated to other grassroots anti-racist organisations which ‘align’ with the group’s ongoing work. The rest will go towards “building an anti-racist organisation that can scale up its existing community organising, educational work and direct actions”.

We are so pleased to announce further details of how the BLMUK fund will be spent! https://t.co/uKpNqH5H2X

Building the Black liberation movement from the ground up

The first round of funding is aimed at grassroots, community-based organisations, including Justice for Black Lives, A Tribe Named Athari, and Acts of Love International. Through this first wave of funding, Black Lives Matter UK seeks to support initiatives that are working to challenge racial injustices in education, policing, immigration and health.

Sistah Space – a Hackney-based charity that works with Black women and girls who are at risk of, or have experienced, domestic or sexual abuse – celebrated Black Lives Matter UK’s £10k donation, stating:

Thanks Nadine. Thanks also @ukblm this grant will help us do vital research, thus giving voice to African heritage DV survivors.

The Northern Police Monitoring Project – a community-based group that works against “police violence, harassment and racism” – expressed gratitude for the £11k donation, saying:

We are so pleased and truly grateful to @ukblm for providing us with essential funding that will help us continue in our fight against police racism and brutality. Thank you for your support! 🙏🏽 ✊🏽 ❤️ pic.twitter.com/7wMRNk8kNO

Grassroots trade union for low paid Black and migrant workers United Voices of the World took to Twitter to celebrate their £15k grant:

Thank you @ukblm for the £15K grant. This money will make a huge difference to our work in supporting low paid, black, brown & migrant workers fight for justice, dignity, respect & equality. We look forward to working closely with you in the future https://t.co/A9ncN0RUcj

Really pleased to see @Sistah_Space listed as one of the recipients of the funding, along with @AfricanRainbow1, @AllBlackLivesUK and others.#BlackLivesMatter#BlackLivesMatterUk https://t.co/YDqA2dbKzU

Black Lives Matter UK will also be releasing £45,000 to fund a “People’s Tribunal” for deaths in police, prison and psychiatric custody led by the United Families & Friends Campaign. Other beneficiaries include AZ Mag – an online publication for LGBTQIA+ people of colour, B’Me Cancer Communities – a charity focused on the health of people from BME and low-income backgrounds, and the Independent Workers’ Union of Great Britain – a trade union for precarious workers.

Black Lives Matter UK is also stepping up to support the Black liberation struggle abroad. The organisation is donating £14,650 to Abahlali baseMjondolo, a “shack dwellers’ movement campaigning against evictions and for public housing” in South Africa, and £7,500 to Sindicato de Manteros de Madrid, a Spanish street vendors’ labour union which primarily supports workers from Black and migrant backgrounds.

International solidarity has always been a crucial part of the history of Black organising in this country. We’re not the first one to have this understanding and that’s a legacy we’re also inheriting.

Thinking about Britain’s history and legacy of colonialism, it’s only right that some of the money goes towards furthering causes in these countries. There’s some really exciting anti-racism work that’s taking place outside of the UK so it’s cool to be able to support it. These are people that we’ve had a relationship with and we want to honour that.

By funding a wide range of independent community-based projects, the organisation really has put its money where its mouth is. It is clear that Black Lives Matter UK is crucial to building a broad-based grassroots anti-racist movement that uplifts Black working class across the UK and beyond.