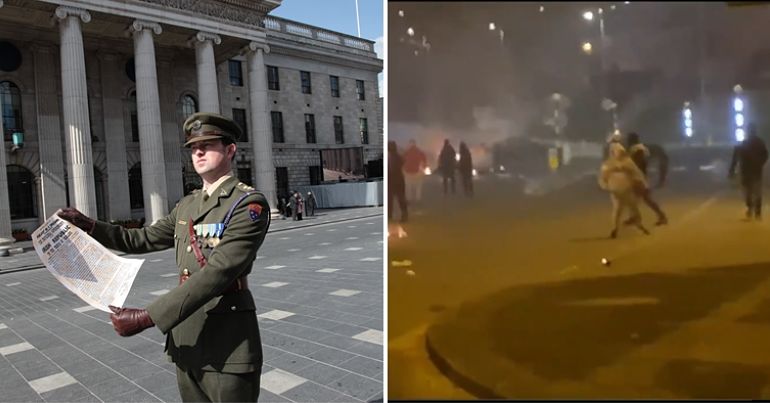 Between 24 and 30 April 1916, Irish republicans, socialists, and nationalists staged a rebellion against British rule in Ireland. They call it the Easter Rising. It was the beginning of the end for British rule in the south of Ireland.

Fast forward to Easter 2021 and it’s British loyalists and unionists who are in the midst of a rising of sorts. Because for the last few days, loyalists have been battling with police in Belfast, Derry, and other parts of the north of Ireland. And unionist leaders are taking the British government to court over the Northern Ireland Protocol.

While loyalists and unionists may not be rebelling against British rule as the women and men of 1916 did, their position is clear. They oppose the British government’s post-Brexit deal with the EU and they have no confidence in the PSNI‘s chief constable. And what also seems clear is, just as the British government has once again abandoned mainstream unionism, that brand of unionism has abandoned loyalists.

It’s hardly the first time loyalists have been let down by unionism. Political commentator Joe Brolly referenced the words of David Irvine:

David Irvine, the loyalist paramilitary turned peacemaker & tireless campaigner for deprived Protestant areas, described this cycle as the DUP marching us (loyalists in impoverished areas) to the top of the hill then melting away before we reached the top. 2 of 7

Some blame current loyalist rioting on a Public Prosecution Service (PPS) announcement. On 30 March, the PPS announced that no action would be taken against members of Sinn Féin who attended the funeral of the IRA’s former head of intelligence Bobby Storey. The funeral was in June 2020.

However, two other Irish republicans were prosecuted for attending a different funeral and doing pretty much the same thing as the Sinn Féin members. And it’s unclear why there’s a different approach to these two funerals. In any case, the PPS is reviewing the Storey decision.

They came onto the streets

It didn’t take long for the signs of loyalist discontent to spill on to the streets:

There’s rioting for a third night in traditionally unionist/loyalist areas of #Derry. Genuine question, why? What has sparked this? Is it the Storey funeral decision? Genuinely want to understand. What are these young people angry about? pic.twitter.com/UYHhOLlMyo

Loyalist violence has certainly increased since then and has spread across the north:

Petrol bombs thrown at police during sustained rioting at a planned loyalist protest in Belfast https://t.co/tcviF1zDjB

Eight police officers injured after loyalist rioting in south Belfast – There are many casualties of Brexit but the damage to Northern Ireland Peace Process is the most terrible. Brexit is an abomination. https://t.co/zb46QytLvI

England voted for this.

It still does not.

Where is loyalism at?

Despite a brief calm, the rioting continued:

DUP MP: "I urge those loyalists, frustrated by the actions of Sinn Fein, to step back, remain peaceful and stay of the streets."https://t.co/qpGuYCaVXW

And a war of words is also emerging:

North Belfast MLA Gerry Kelly claimed the disturbances "are an out-working of the DUP’s rhetoric and undermining of the PSNI and criminal justice system"https://t.co/32lX2Fl408

Good morning readers. Here's a look at today's front page of the Belfast Telegraph. Stay with @BelTel for all your breaking news.https://t.co/bbRGxQjfhA pic.twitter.com/VbGpJNVlOY

We’ve been here before…

Some unionist leaders campaigned for Brexit. Despite that, they’re taking legal action against the protocol. And because of that protocol, loyalists chose to withdraw from the 1998 peace agreement.

Unionists reacted to the Bobby Storey decision but had little to say about the Irish republicans who are facing prosecution. And following the Storey decision, unionists’ words were clear. So, just as the British government has once again shafted mainstream unionism, they’re doing something similar to working class loyalists. It’s become all too familiar.