As Brexit reality hits home, it's starting to expose the DUP in Northern Ireland - Canary 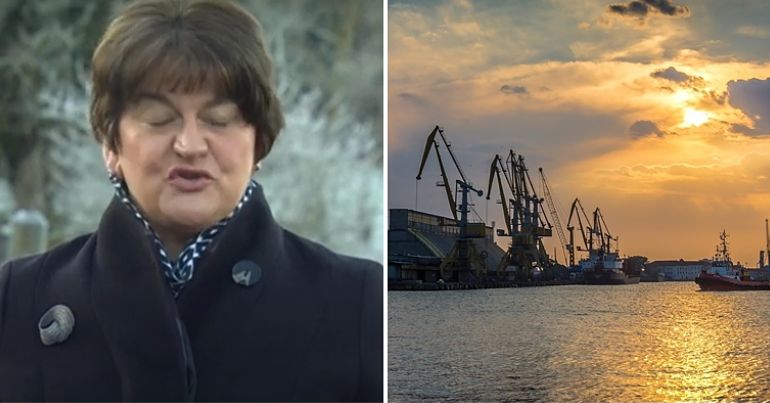 When the UK left the EU on 1 January 2021, both parties entered a new trade relationship. This new relationship came about after a protracted and difficult negotiation process that’s been ongoing since 2017. Negotiations began one year after the referendum on EU membership on 23 June 2016.

This process finally concluded in December amidst a global pandemic. It also followed several defeats for Theresa May’s government. These defeats made her position untenable and paved the way for hard-line-Brexiteer Boris Johnson, who took over in July 2019.

And despite the arduous negotiation process and a hard-line-Brexiteer government, the whole of the UK still hasn’t fully left the EU. The north of Ireland continues to align itself to the EU’s single market for goods. This has led to food shortages in UK supermarkets and chaos in export between Britain and the north of Ireland. And, as the DUP was the only political party in the Stormont Executive to back Brexit in 2016, the reality of 2021 is biting it hard.

The DUP has long been a Euro-sceptic party that wanted to change the UK’s relationship with the EU. So it didn’t confine its Brexit campaign to just the north of Ireland. In fact it played quite a sordid role influencing the vote in the wider UK. However, almost 56% of the north’s electorate voted remain.

Also, when the DUP backed Theresa May’s Conservative government through a ‘confidence and supply’ arrangement following the 2017 general election, it was clear it was a hardline-Brexit party.

It’s the early days of 2021, and the chaos Brexit has brought has cruelly exposed the DUP’s position. There have been empty shelves in shops in the north of Ireland. And this has been blamed on Brexit.

The Brexit deal between the EU and the UK has created a de facto border down the Irish sea between the island of Ireland and Britain. This border has been in part responsible for some of this chaos.

In August 2020, Johnson said that border would happen “over my dead body”. The border is also the very thing the DUP said it would not allow. In 2018, DUP leader Arlene Foster said a sea border was a ‘red-line issue’ while stating:

there cannot ever be a border down the Irish Sea, a differential between Northern Ireland and the rest of the UK.

But there very much is a border today. And given the north of Ireland shares a land border with the EU, it was always a very likely outcome of Brexit negotiations.

Now that the reality of food shortages and border delays is here, the DUP is lashing out. The DUP’s minister for agriculture Edwin Poots blames opposing political parties in the north:

The issues at our ports are a result of the Ireland Northern Ireland protocol supported by SF, SDLP and Alliance Party.

And Poots warned there could be even worse to come in the form of more food shortages and job losses.

Egg on its face

The DUP may not support the current Brexit trade deal. But its role in supporting the Leave campaign can’t be denied. Furthermore, as an ardent Brexiteer government struck the current deal, it’s as close to an absolute Brexit deal as was ever likely. Particularly as the UK still shares a land border with the EU.

So even if it’s slowly beginning to realise the folly of its position, this chaos is on the DUP. And while the precise details of a final post-Brexit scenario couldn’t have been known exactly, chaos was somewhat predictable. The DUP needs to own that.