A petition to do with post-Brexit changes in the UK has blown up on Twitter, and a phrase from it was trending on Sunday 10 January. “Stop the UK” was across people’s timelines. But “stop the UK” from what, you may ask?

On 10 January, the phrase “Stop the UK” was trending on Twitter: 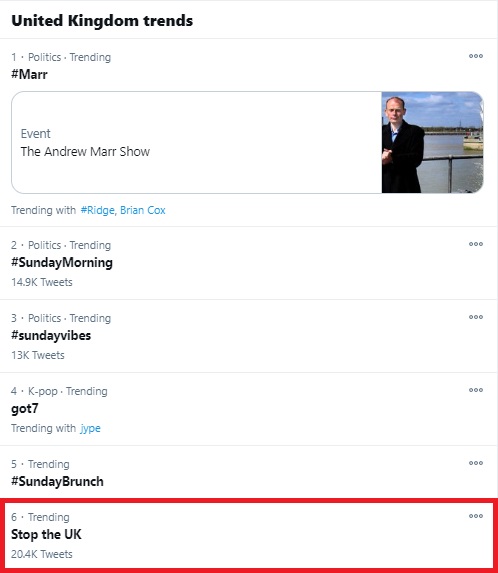 It was in relation to a Change.org petition. The text of it reads:

Now we have left the EU the British government will be allowing EU banned pesticides Neonicotinoid Thiamethoxam to be used on crops.

So, what’s the fuss about?

“Stop the UK” from… using pesticides?

The Canary previously reported on neonicotinoid thiamethoxam. It noted that:

But there’s a problem. Because these insecticides don’t just kill pests. The Canary wrote that:

Neonics are systemic pesticides; pesticides that are transported throughout the plant… It is also found in pollen and nectar. This is why it is particularly harmful to bees and pollinators.

Here’s where the problem lies.

“Stop the UK” from… killing bees?

In short, neonics including neonicotinoid thiamethoxam harm bees. For example, one study found that exposure to the insecticide (referred to below as TMX):

impaired motor functions, reducing the ability of foragers to walk and to climb. TMX-treated foragers fell more often (+83%), exhibited more abnormal behaviours (+138%), and were more frequently unable to ascend the arena (+280%). These bees also spent more time at the bottom (+93%) and less at the top (−43%) of the arena, as compared to control bees.

In other words, bees were not able to pollinate so well. Other studies had similar findings, one noting that in Hungary worker bee numbers fell by 24%. All this will, among other things, directly hit human food supply.

So why is the government allowing farmers to use this insecticide?

“Stop the UK” from… pandering to industry?

When it was in the EU, the UK voted to ban neonicotinoid thiamethoxams. But there was a get-out clause about ’emergency authorisation’. The government has now used that. It said in a statement on 8 January:

After careful consideration of all the issues, the government has decided to grant an application for emergency authorisation to allow use of a product containing the neonicotinoid thiamethoxam for the treatment of sugar beet seed in 2021. This is in recognition of the potential danger posed to the 2021 crop from beet yellows virus.

The government says the risk to bees will be “acceptably low”.  But the Guardian claims otherwise.

“Stop the UK” from… breaking its promises?

It says that the government has done this after “lobbying from the National Farmers Union (NFU)”. It quoted Matt Shardlow, chief executive of the invertebrate conservation group Buglife, as saying the move was “environmentally regressive”. He also said:

no action is proposed to prevent the pollution of rivers with insecticides applied to sugar beet. Nothing has changed scientifically since the decision to ban neonics from use on sugar beet in 2018. They are still going to harm the environment.

The Guardian accused the government of ‘breaking its promise’ over the 2018 ban. While this is not strictly true, the move is certainly, as Shardlow said, environmentally regressive. Brexit-supporting Tories have a habit of dodgy actions (£350m a week for the NHS?). And allowing an insecticide to harm our bee population could have serious, long term consequences for all of us.