The damning UK stat everyone should see on #WorldHungerDay - Canary 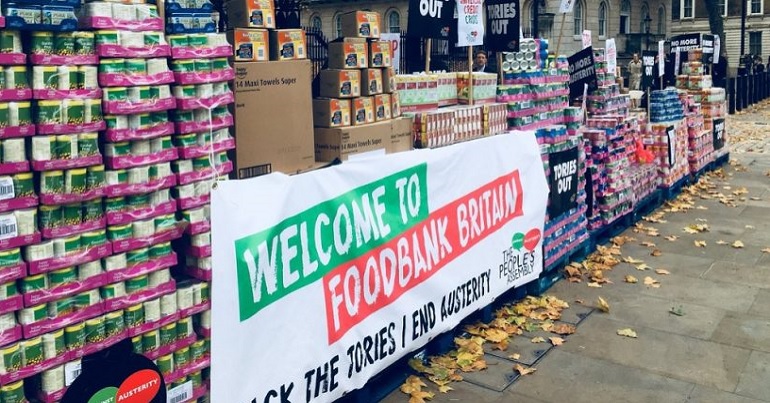 Friday 28 May is #WorldHungerDay. And while lack of access to food is a huge problem in the world’s poorest nations, it’s also a major issue in the UK.

Hunger is not just about food. Hunger and poverty are inextricably linked to a nexus of issues including: the rights of women and girls, income opportunities, health, education, social justice, the environment and climate change.

This year, #WorldHungerDay is focussing on:

the critical importance of access to education, healthcare and technology in ending hunger.

The scale of the problem globally is staggering. The World Hunger Clock keeps a live count of people in food poverty. As of 11:30am on 28 May, over 2.4 billion people live in “moderate” or “severe” food insecurity; over 819 million of these are classed as severe, and over 161 million children have impaired growth (“stunted”) due to a lack of food:

The problem of food poverty also exists in the UK.

Last year, #foodbanks in our network gave out a staggering 2.5 million emergency food parcels. This simply isn't right. On #WorldHungerDay, it's time to come together and call for change. pic.twitter.com/xIvRkhebtx

During the financial year 2020/21, the Trussell Trust said it saw a 33% increase in use on the previous year. It also gave out food parcels to nearly one million children.

But the Trussell Trust seeing an explosion in demand is the tip of the iceberg. And it’s not just a coronavirus (Covid-19) pandemic problem either.

The World Health Organisation and other groups class food insecurity as people who have “limited access to food … due to lack of money or other resources”. As the charity Church Action on Poverty wrote, food insecurity in the UK has been a huge issue for years. It noted that:

The Government’s own research conclusively shows that, even prior to the pandemic, one in twelve of all households in the UK were experiencing low or very low levels of food security.

An issue of class and protected groups

How have we got here?

As Church Action on Poverty summed up:

It is an indictment of successive Governments that benefit levels across the board have been allowed to drop to such low levels that we have reached this stage.

Millions of families face worrying whether their food will run out before they get money to buy more; can’t afford balanced meals; skip meals or are forced to eat less than they should because there isn’t enough money for food.

Whether or not the UK will be in the same or a worse position on the next #WorldHungerDay remains to be seen. But unless urgent action is taken, it is, unfortunately, unlikely to improve any time soon.