Palestinians’ right to live free from Israeli occupation, apartheid and genocide should never be up for debate - The Canary 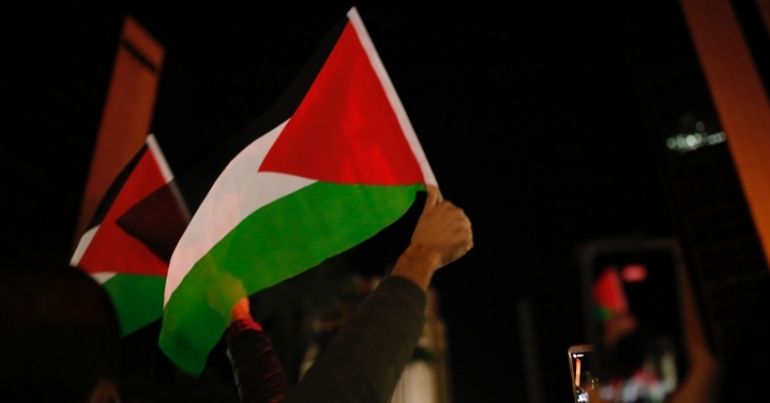 On 9 November, students from the London School of Economics (LSE) protested a debate hosting Israeli Ambassador to the United Kingdom Tzipi Hotovely on campus. As British Jews Against Occupation have set out, Hotovely has an “appalling record of racist and inflammatory behaviour”. In spite of this, the university – as well as Tory and Labour politicians – rushed to denounce the peaceful protest. Police have launched an investigation.

People took to Twitter to highlight the hypocrisy of those defending Hotovely’s right to free speech while denouncing the actions of peaceful pro-Palestinian protestors.

Ahead of an LSE Students’ Union Debate Society event hosting Hotovely, LSE for Palestine shared plans to protest the platforming of the reported anti-Palestinian racist and Islamophobe. The student group planned a peaceful protest to take place outside the event in a display of solidarity with Palestine, and an attempt to disrupt and discredit the Israeli ambassador’s fascist ideology.

Hotovely is an ambassador of the apartheid Israeli state. She has a track record of spreading Israeli settler colonialism propaganda, Islamophobic rhetoric, and anti-Palestinian racist hate. She has described the Nakba – the forced displacement and ethnic cleansing of Palestinians by the Israeli state – as an “Arab lie”. Hotovely also called for further Israeli occupation of Palestine through annexation. And she has denied the very existence of Palestinian people. Protesters also highlighted that she has espoused Islamophobic rhetoric, and is openly against relationships between Jewish and Arab people.

Ahead of the debate, the LSE Students’ Union Palestine Society shared a statement reading:

While protesters chanted outside the building in which the debate was taking place, Hotovely retained her platform for the duration of the event. During that time, she denied the Nakba again. The only disruption inside the building was a group of students walking out in protest.

Student protestors booed as Hotovely left the building. In video footage, one protester can be heard asking “aren’t you ashamed” while security bundles the ambassador into a car. It appears that the protest was disruptive, raucous and passionate, but never violent. However, police allegedly assaulted students on their own university campus.

Maintaining that “Palestinian human rights are not up for debate”, LSE for Palestine posted:

We must keep this momentum going &make sure events like these never happen again.
Palestinian human rights are not up for debate and we will never stop resisting & agitating for a free Palestine and the liberation of Palestinians from the settler-colonial israeli apartheid regime

Tzipi Hotovely is the Ambassador of a state rightly defined as practising apartheid. She is also a virulent racist with a confirmed record of anti Psalestinian discourse.⁸She should be met with protest in any arena she visits.

However, LSE published a statement insinuating protestors engaged in “intimidation and threats of violence”. The university stated that it is prepared to take action against student protesters.

For all the talk of “SU democracy” students will be harassed, surveilled & repressed by uni managemrnt for opposing racism, colonialism, Apartheid & their universities complicity in them.

The only option for resistance & liberation i ongoing demonstrations & direct action.

In the wake of the protest, Hotovely soon garnered the support of right wing UK government officials. Home secretary Priti Patel posted a tweet saying that she was “disgusted” by the peaceful protest. And Middle East minister James Cleverly characterised protesters as “aggressive and threatening“.

Netpol responded to the home secretary’s support for the police investigation into the peaceful protest with:

When Priti Patel seeks to criminalise pro-Palestinian protest by students, remember that she had 13 secret meetings with Israeli gov figures (inc Netanyahu) without the knowledge of the gov she represents, in which they discussed sending DFID funds to the Israeli Occupation Army.

Soon, even Labour MPs spoke out against the peaceful student protest. Leader of the opposition Keir Starmer and shadow foreign secretary Lisa Nandy called the protest “unacceptable“. People were quick to call out the absurdity of members of the opposition vehemently supporting an out and proud fascist.

They were booing someone who represents a country credibly accused of war crimes after she had spoken for 90 minutes.

I’m so so angry today. The most basic principles of not just solidarity but fairness seem totally violated at the moment. Those kids did nothing wrong.

Tzipi should feel unwelcome in this entire country given the beliefs and political stances she holds.

In fact all genocidal maniacs should feel unwelcome here… https://t.co/lNDj0eBDQp

In spite of backlash from LSE, the government and the mainstream media, many have spoken out in defence of the student protesters. Pro-Palestinian student societies from the School of African and Oriental Studies (SOAS) and King’s College London (KCL) spoke out in solidarity with LSE protesters, setting out that proponents of apartheid are not welcome on their campuses either.

There's something so inspiring about students coming together for a common cause. A huge shout out to the different Palsocs across London who showed up for @LSEforPalestine to say apartheid off campus!🇵🇸✊🏾@SOAS_Palestine @CityFOP_ @kcl_sjp @uclsjp @QMULPalSoc & others

Journalist Robert Carter, who reported from the protest, shared:

Unlike all the shameless Labour and Conservative MPs rushing to board the "every student's an anti-Semite" bandwagon, I was actually there reporting at LSE the night of the protest.

The only racist I saw that day was Israel's Ambassador Tzipi Hotovely.

Says a lot about this British government crying wolf and jumping to defend a racist Islamophobe like far-right Tzipi Hotovely, who has consistently denied the existence of Palestinians and is a strong supporter of illegal settlements.

Free speech for whom?

Speaking to the suppression of marginalised voices in the name of ‘free speech’, Ana Oppenheim shared:

Both major parties calling for a *police investigation* because some students organised a pro-Palestine protest on their campus is really, really chilling.

Why is it always about protecting the free speech of the famous and powerful but denying it to everyone else?

Great. There should be no place indeed for Nakba deniers and anti-Palestinian racists on campus. 👊🏼 https://t.co/yQcsCzffwk

Urging people to speak up in defence of Palestine, assistant professor at LSE Sara Salem tweeted:

Solidarity with @LSEforPalestine. In light of disturbing media and government responses to the right of students to protest on campus, it's so important we defend spaces of solidarity with Palestine https://t.co/OECzft4pnJ

Solidarity with @LSEforPalestine students now. Beyond the prospects of democratic protest on LSE's campus, this is an affair that concerns the future of Palestine solidarity activism in the UK, even beyond. Time to speak up. #DecoloniseLSE

Bringing attention back to the violent reality of Israeli occupation, one Twitter user shared:

mohammed daadas, a 13 year old child, was recently shot and killed by israeli occupation forces during demonstrations against their apartheid. meanwhile you've got people like nandy talking about 'freedom of speech' wrt demonstratrstions against tzipi hotovely

Arguments denouncing the peaceful student protest while crying wolf about the Israeli ambassador’s right to free speech beg the questions: ‘free from what?’ and ‘free for whom?’. Palestinians’ right to live free from Israeli occupation, apartheid and ethnic cleansing should certainly never be up for debate. The state and its institutions may be coming after student protesters, but the protesters stand firmly on the right side of history.