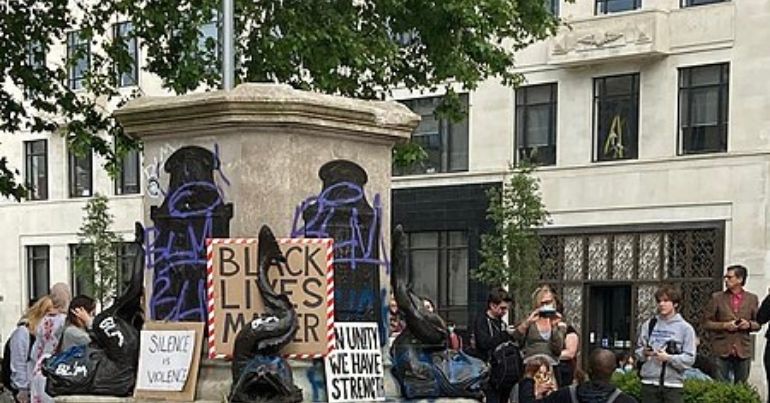 Right-wing figures seem very confused by the acquittal of those dubbed the Colston Four. The four activists were on trial for criminal damage relating to the toppling of Tory slaver Edward Colston’s statue into the River Avon in 2020. Rhian Graham, Milo Ponsford, Sage Willoughby and Jake Skuse were all found not guilty by a jury. There were scenes of celebration as a result of the ruling.

But not everyone was happy it seems. Right-wing commentators and politicians turned out on Twitter to express their sadness and confusion that those who toppled the slaver’s statue had been acquitted.

Among these was former Sun editor Kelvin MacKenzie. MacKenzie simply could not understand why the four had been let off. He went as far as to question the jury’s mental health:

I can't help questioning the sanity of the jury who cleared 4 protestors who admitted pushing
the statue of the 17th century slave trader and philanthropist Edward Colston into Bristol harbour. The accused claimed the statue was a hate crime. The jury seemed to agree. Madness.

Tory MP Robert Jenrick was similarly alarmed at the verdict. He suggested that toppling Colston – who, incidentally, was also a Tory MP – amounted to making vandalism an acceptable form of protest:

We undermine the rule of law, which underpins our democracy, if we accept vandalism and criminal damage are acceptable forms of political protest.

They aren’t. Regardless of the intentions. https://t.co/JsOj0kNgWq

An absolutely appalling decision. Are we now a nation which ignores violent acts of criminal damage? This sends out completely the wrong message. https://t.co/f81xnARVcc

Top prize for sad right-winger, however, must go to commentator Darren Grimes. Grimes lamented the idea that you could now “destroy public property” if it was a “noble” cause.

I cannot believe this news about those who toppled the statue of Edward Colston being found not guilty of criminal damage. Are we really now a country that says you can destroy public property as long as you're doing it for a purportedly noble political cause?

The GB News contributor asked if the representation of Karl Marx in Highgate Cemetery in London could legitimately be toppled according to that logic:

Though he failed to note that, unlike Colston’s statue, Marx’s Highgate monument is also the German revolutionary’s gravestone.

But it’s important never to let Tories and statue defenders have the last word. On the matter of Colston, left-wing MP Zarah Sultana captured the real spirit of the man and his sordid business practices:

Edward Colston was responsible for violently transporting 84,000 Africans to the Caribbean. They were chained, beaten and raped, with 19,000 dying en route.

Grotesquely, a statue was put up to honour him in Bristol, but today in court those who toppled it were rightly cleared.

As Sultana rightly points out, Colston was involved in transporting tens of thousands of African people to the Caribbean. Nineteen thousand of whom died during the passage. Once there, they were further subjected to all the brutalities that characterised that disgusting practice.

And the Bristol band Massive Attack also weighed in, saying that the stature should never have been there in the first place:

It took 16 ordinary Bristol citizens – 4 innocent defendants & 12 jurors – to end a century of intransigence & delay at the hands of successive councils, elected mayors & the @SMVBristol.
No monuments to crimes against humanity. #BLM #Colston4 https://t.co/K5kdtULR49

Unlike the wealthy Tory slave-owner Edward Colston, few of his victims names are remembered. Seen in this light, the toppling of his statue in Bristol into the docks looks less like vandalism and more like a small meaure of justice for the victims of his horrendous actions.

Featured image via Caitlin Hobbs/Wikimedia, cropped to 770×403 pixels, licensed under CC BY 4.0