The Trades Union Congress (TUC) was supposed to be protesting at this year’s Tory spring conference, but it ended up redirecting its energy to the Russian invasion of Ukraine. Never fear, though – as local groups in the North West are refusing to let the Tories off the hook that easily.

The conference is taking place on 18 and 19 March at the Blackpool Winter Gardens.

The TUC: cancelling a protest

On 9 March, the TUC said it was cancelling its planned protest on Saturday 19 March. It said in a statement:

Over the coming fortnight we will be mobilising trade unionists in support of the ITUC day of solidarity with Ukraine on 15 March.

And we will support the mobilisations in London and around the UK for the UN Antiracism Day on 19-20 March – particularly as this government refuses to welcome enough refugees from Ukraine into the UK.

The wages and bills crisis is about to bite. The TUC and the whole trade union movement demand action. So we will be bringing our campaign to win pay rises and a new deal for workers to a town or city near you soon and hosting a national mobilisation in London this summer. Dates and details to be announced soon.

But local groups clearly felt they should still take action.

Tory spring conference: the demo is on

So, two days of action are happening anyway. Wendy Fell from Blackpool, Fylde and Wyre Trade Union Council and Unite Community Lancashire said in a statement:

Within 24 hours we and allies locally… turned round the TUC pulling out. We have got things agreed with the police who will be all over that area of Blackpool. We have got a march route organised and adverts and social media material ready.

The two days of action will see plenty going on. On 18 March, St Johns Square in Blackpool will see stalls and speakers from 1pm. Then, on 19 March, people will meet at the Comedy Carpet on the sea front near to the Blackpool Tower. They’ll march to the Tory conference at Winter Gardens/St Johns Square. If you can make it in person, be sure to follow the demo on social media: 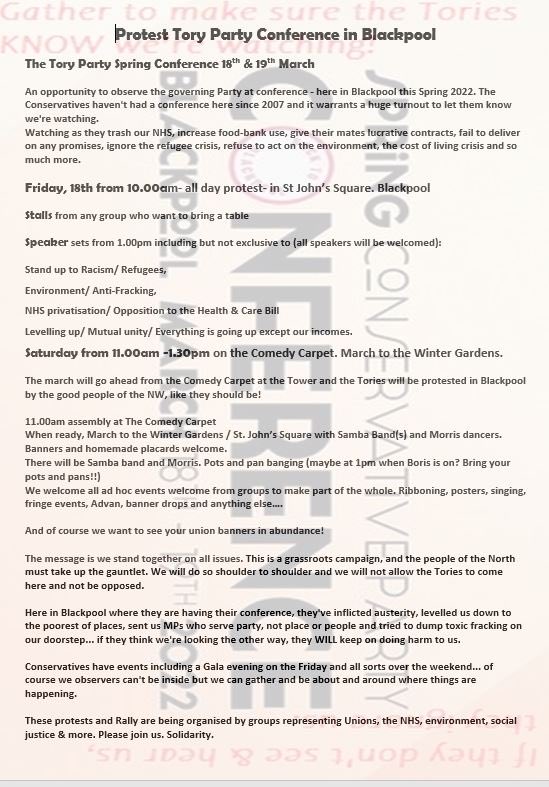 Blackpool: get there if you can

Fell said that the Tories:

will try and dominate the domestic news agenda with their narrative. While the media and the Conservatives are in Blackpool, we will attempt to get our own ideas across, ideas which include social justice and fairness – unlike theirs.

The Conservatives haven’t had a conference here since 2007 and it warrants a big turnout to let them know we’re watching. Watching as they trash our NHS, increase food-bank use, give their mates lucrative contracts, fail to deliver on any promises, ignore the refugee crisis, refuse to act on the environment, the cost of living crisis and so much more.

With the price rises and cost of living crisis, disabled people face the devastating impacts of poverty more fiercely than other demographic. Please do all you can to help us in that crucial task.

So, if you’re in or near Blackpool on 18 and 19 March, it’s time to show the Tories that people won’t take their toxic governance lying down.