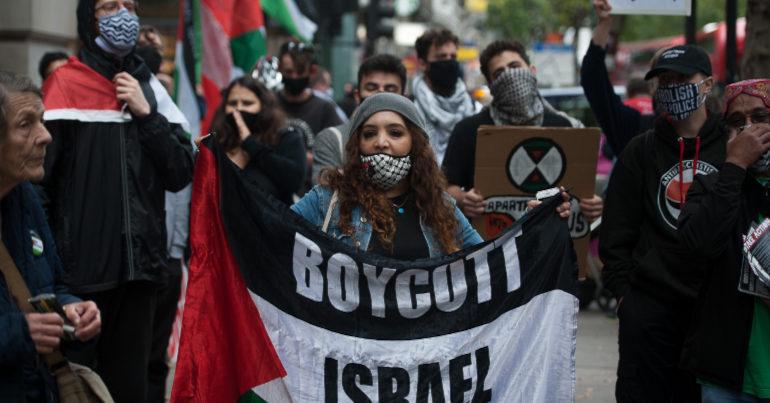 Palestine solidarity campaigners have been involved in an intense campaign of direct action against Israeli arms company Elbit for years.

On 20 June they announced the closure of another of Elbit’s UK locations:

After six actions in six weeks, Palestine Actionists forced the last nail in the coffin of the Israeli arms firms London HQ — They #ShutElbitDown! pic.twitter.com/JdGIeFTRn1

Earlier this year, Elbit was forced to shut down its Ferranti factory in Oldham, after a years-long community campaign combining a groundswell of local opposition, mass demonstrations, and direct action.

Elbit is Israel’s largest private arms manufacturer, and produces around 85% of Israel’s drones – which have been used to massacre Palestinians in Gaza. The company is also responsible for manufacturing small-calibre ammunition for the Israeli army.

Palestinians have been calling on people around the world to take action against Elbit. The Boycott, Divestment and Sanctions campaign (BDS) calls for global campaigns against the company.

77 Kingsway has become the second Elbit site permanently shut down by Palestine Action, in less than 2 years of sustained direct action.

Our inaugural action saw activists storm the company’s former central London office, trashing site facilities and spray painting ‘Shut Elbit Down’ and ‘We will be back’ across the walls. As the campaign continued, tactics included disruptive entry, outdoor & indoor occupations, paint throwing and chain-and-lock blockades. The 15 separate actions at Kingsway and simultaneous sister actions against its landlords, have culminated in dozens of arrests — 60 in total, for which many activists still face trial. Elbit’s closure comes after weeks of dramatically-intensified action targeting their Kingsway headquarters.

The direct action at Elbit’s Kingsway office were complemented with an intense campaign of direct action against their landlords, Jones Lang LaSalle:

Simultaneously, a direct action campaign launched against JLL, who leased the offices to Israel's murder machine. Activists across the country defaced their property, to pressure the company to #EvictElbit pic.twitter.com/2QKr44Tqgi

There has been an outpouring of messages of solidarity for the campaign on Twitter from supporters of Palestine:

After relentless direct action and a number of arrests, Palestine Action has made business in Britain’s capital inoperable for Israel’s largest weapons company, Elbit Systems. https://t.co/m9s4cAmNkH

Elbit have left the building: @Pal_action permanently closes down the company's London HQhttps://t.co/0nUBhSM9kR

If you’d like to take action with Palestine Action, the details of how to get involved are in the text 👇

"Palestine Action will continue to throw a spanner in the works of apartheid, military occupation and dispossession until Palestine is free." 👏👏👏 Direct Action!✊#ShutElbitDown #BDS #ApartheidIsrael https://t.co/n20xB5NQPx

Palestine Action has vowed to close the eight remaining Elbit sites in the UK:

We will build on the success of this closure and we won’t stop until all eight remaining sites follow suit. It’s a victory for all those who sacrificed their liberty and to all those who supported the movement, but most importantly the Palestinian people. It brings us another step closer to the day Israel’s arms trade is out of Britain for good.

Israeli forces attack Palestinians on a daily basis using weapons manufactured by Elbit. It is paramount that we stand in solidarity with Palestinans, and one way to do that is to join the campaign to push Elbit out of the UK.