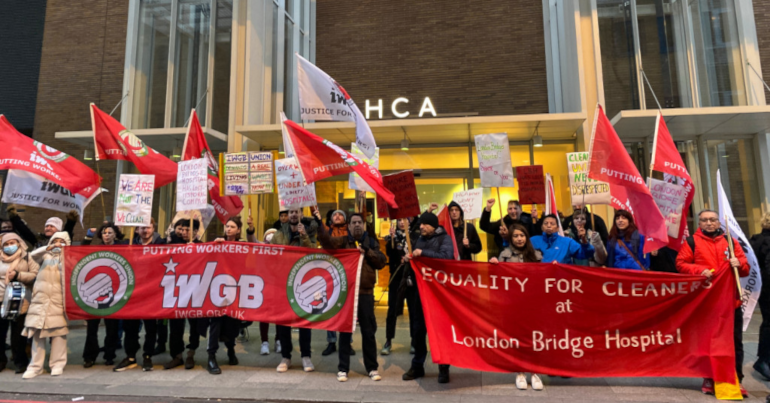 Outsourced cleaners at London Bridge Hospital gathered outside HCA, the US private healthcare giant that forced them to work in unsafe conditions during COVID for poverty pay.

They deserve fair pay and respect for their hard work, not treatment like second class citizens. pic.twitter.com/vYTf8TVqfj

London Bridge Hospital cleaners are a majority-migrant workforce, and are being paid less than the London Living Wage

The demonstration was part of a campaign launched in February this year. The cleaners’ struggle has already started to worry their bosses. The day before last week’s protest, IWGB revealed that Compass had offered the cleaners a “poverty pay rise” in order to – in the unions’ words – “keep them quiet”. However, the cleaners are determined to get more than just the crumbs from the table. IWGB tweeted:

BREAKING!
1/ @compassgroupuk offering a poverty pay rise to @LondnBridgeHosp cleaners a day before their protest, in order to keep them quite!🤐
Clever move by the outsourcing company but our members are resolute and will not stop until all their demands are met✊️
Equality Now! pic.twitter.com/AhX9XAMK1w

The cleaners have launched a petition for better pay and proper sick pay, and against unsafe conditions and harassment from management. They have released a video letting people know how to support their campaign:

Yesterday outside @HCAHospitalsUK shaming the multi-million corporation for exploiting its cleaners @LondnBridgeHosp with poverty wages, worse conditions of employment, without a proper sick pay and overload of work
We will be back!✊️
Sign the petition👇https://t.co/j5NtPiSxdx pic.twitter.com/xQVtrna7Zs

My name is Ramona, I’m a cleaner at London Bridge Hospital. We do vital, risky work for a multi-million dollar company but we are treated as second class citizens. We are outsourced on poverty pay. We are bullied and harassed, we lack basic rights like proper sick pay and access to the hospital facilities. When we get sick we cannot afford to stay at home. Enough is enough!

Profiting from the pandemic…

HCA has been implicated in numerous scandals in the UK and the US. An investigation by Corporate Watch details how HCA “made billions” from the pandemic by swooping in and hoovering up lucrative COVID contracts, while cutting corners on health and safety and personal protective equipment (PPE). HCA received a massive £1.69bn contract in 2020 for extra NHS bed capacity. Corporate Watch argues that this massive expenditure didn’t translate into any significant benefit for the NHS:

This billion-pound payout didn’t translate into significantly higher capacity for the NHS. In fact, overall “private hospitals delivered 0.08% of COVID care”. Out of an estimated 8,000 private beds, the highest number ever occupied by Covid patients on one day was only 78.

HCA also received about £3m in furlough payments in 2021.

But HCA’s massive profits haven’t translated into better conditions for the workers either. According to Corporate Watch:

HCA made profits of $3.75 billion in 2021. Yet cleaners at HCA’s London Bridge Hospital had to go through the pandemic without even basic protections.

One HCA cleaner told Freedom News back in March:

We risk our lives working here. The managers have sent us to clean areas full of infected people without PPE. When I caught covid at work, I was forced to isolate for two weeks without the sick pay that directly-employed workers get. The pay is already so low, I can’t afford to take two weeks off on £96.35 a week. When I asked Compass for support in accessing the statutory sick pay, they did nothing so I ended up at home for two weeks with no money.

In the US, the story was the same; HCA cut costs at the expense of workers’ lives. According to Corporate Watch:

HCA is pushing a privatization agenda

Meanwhile, HCA is pushing a privatisation agenda in the UK. According to Corporate Watch, the company joined the Private Hospitals Alliance – a pro-privatisation lobby group – in 2010. Since then, HCA has donated money to the Conservative Party, while lord Clive Hollick – a HCA shareholder – has been busy making donations to politicians on the right of the Labour Party, including Keir Starmer.

On top of running London Bridge Hospital, HCA also runs five other hospitals and partnerships around the UK, but the company obviously wants to use its influence to get its hands on as much of the NHS as it possibly can. Corporate Watch argues that the pandemic has created a “perfect storm” for that to happen. The NHS is stretched to breaking point, and publicly funded services are being left to rot. The government is eager to set the NHS up to fail so that private companies can step in and make a fast buck.

Solidarity with the cleaners

Meanwhile, workers that we briefly recognised as ‘essential’ during the pandemic are being treated like dirt. Zrinka Bralo of Migrants Organise sent a message of solidarity to the cleaners’ campaign:

For a brief moment during the pandemic we called our migrant workers, including cleaners, essential workers. That is what they are and continue to be. Not just for the economy, but for our entire society. Their work needs to be recognised, respected and paid properly. Being paid the London Living Wage at the time of a harsh economic crisis is the bare minimum. We stand in solidarity with all migrants seeking justice and dignity. Profiting from the exploitation of essential workers is [unnacceptable] and we applaud the IWGB members for taking action

According to Henry Chango Lopez of the IWGB:

It is totally unacceptable that a multi-billion dollar private healthcare provider is overworking its long-term staff on pay well below the London living wage, while bringing in temporary agency workers at much higher pay to plug the gaps. This majority-migrant workforce worked hard all through the pandemic in dangerous working conditions but are denied proper sick pay and cannot afford to take time off when they get ill. With the cost of living skyrocketing, and inflation approaching 11% for low-paid households, these workers urgently need pay that enables them to support themselves and their families.

The London Bridge Hospital Cleaners are just one of the groups of workers who are at the knife-edge of the class war being waged in the UK right now. We need to stand in solidarity with them and support their campaign. One way to do that is to sign their petition here or click here to find out how to support their struggles

Tom Anderson – the author of this piece – is also part of Corporate Watch, the research group involved in producing the report referenced in the article.