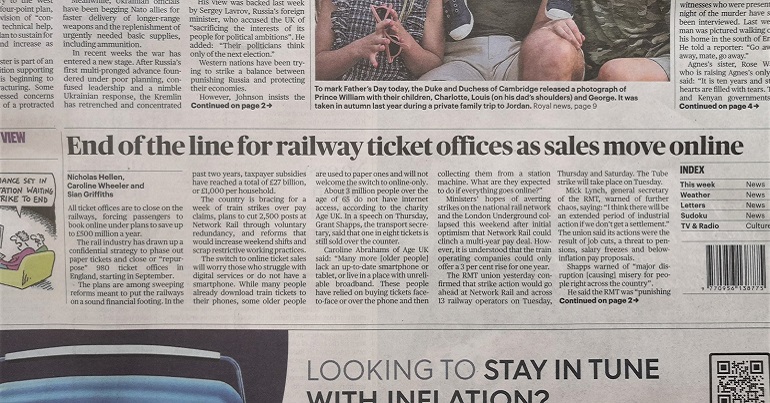 Rupert Murdoch’s Sunday Times published and then changed an article about the railways. It showed part of the reason why the Rail, Maritime and Transport Workers (RMT) union are striking. Little wonder really that the right-wing shitrag wouldn’t want the piece to continue as it was. Fortunately, the internet doesn’t forget.

As the Association of British Commuters (ABC) tweeted:

Yesterday, @thesundaytimes deleted their story about the secret plan to close all 980 railway ticket offices in England.

Here it is on their front page: pic.twitter.com/7HYqjRBuOZ

The Sunday Times ran the article on 19 June. Originally, the headline was:

All ticket offices are to close on the railways, forcing passengers to book online under plans to save up to £500 million a year.

The rail industry has drawn up a confidential strategy to phase out paper tickets and close or “repurpose” 980 ticket offices in England, starting in September.

The Sunday Times continued by saying that three million people over the age of 65 do not have internet access, and:

The switch to online ticket sales will worry those who struggle with digital services or do not have a smartphone. While many people already download train tickets to their phones, some older people are used to paper ones and will not welcome the switch to online-only.

It carried on talking about the RMT strike. Then, at 12:30pm on 19 June, the Sunday Times altered the article.

We will keep striking until we get a deal, warns RMT

It leads with the RMT strike and general secretary Mick Lynch’s comments to Sky News. The Sunday Times moved the story on ticket offices further down the article. And suddenly, associate political editor Henry Zeffman was additionally credited as the author.

Essentially, the Sunday Times has dampened the story down – possibly because it shores up the RMT’s strike action. The ABC tweeted that readers weren’t happy:

Here's the archived version of the Sunday Times article about the "Secret plan to close all ticket offices in England."

In the comments section, there are hundreds of complaints from irate passengers, especially disabled and older people: https://t.co/BQvfQ1g4i1

Not that you’d think all of this if you believed Zeffman. He defended the Sunday Times‘ post-publication editing of the article:

No, they didn’t. It had some fresh language from Mick Lynch added to the top of it but it’s all here https://t.co/bzYTn0uz3P

Zeffman can spin it all he wants. The clear implication is that the original Sunday Times article:

Therefore, the editors had no choice but to alter it – Murdoch’s paper couldn’t possibly be seen to give weight to a trade union’s strike, after all.