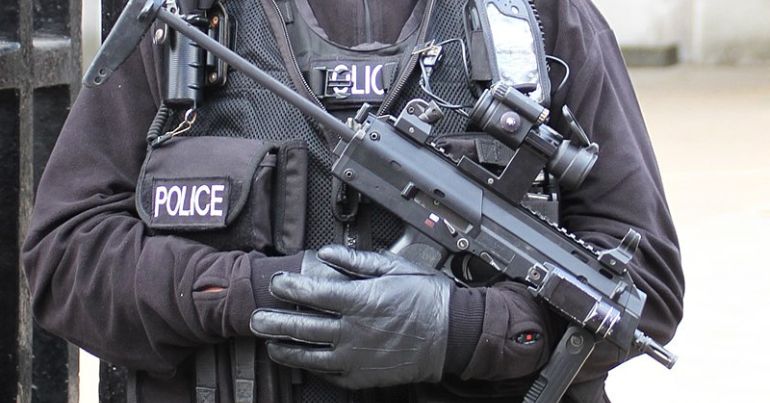 Armed police stopped two Black boys in Liverpool on Wednesday 28 June while shocked locals looked on. The teens stood calmly as the officers, who were carrying assault weapons, surrounded them in a residential area. The youths were eventually released without charge.

It was later reported that the young boys were stopped in what appears to be a case of mistaken identity. However, the police maintained that the armed stop and search was “justified and appropriate“.

A man had been reported earlier as being in the area with a gun in the waistband of his trousers.

A local Labour MP said there was a history of racist policing in Liverpool. Kim Johnson told the BBC:

I do believe that Merseyside Police is institutionally racist.

She said that the local force had cultural problems:

Two unarmed black boys, traumatised by armed Merseyside Police stopping them with guns, it was a case of 'mistaken identity'. Thank god they kept their cool and were calm, the Police on the other hand aggressive as usual @MerseysidePCC @MerseyPolice @merpolchiefcon pic.twitter.com/YPSeIDSaqo

A local reporter noted the lack of an apology from Merseyside police;

Considering these two men were innocent of any crime, it's unfortunate that there is nothing even bordering on an apology in the police responsehttps://t.co/9W0rtNhPgH

Another commenter suggested that Liverpool police should be put on special measures like the Metropolitan force was this week. That decision followed a long series of failures and controversies:

Merseyside Police need to be put on special measures next. This was them yesterday. They later admitted they got the wrong Black boys. It’s time we #withdrawconsent. My blood is boiling… pic.twitter.com/bA5z0HGkNZ

For some, this raised fears that the situation could easily have become violent and led to a tragedy:

It’s indisputable that black people are disproportionately stopped by the Police, and cases of ‘mistaken identity’ such as this raise real concerns of racism. Thankfully Police firearms were not discharged, but once again we see the spectre of near tragedy https://t.co/1XAinyKKg0

A spokeswoman for the Granby Somali Women’s Group told the BBC:

This is not a rare occurrence, as Merseyside Police are driving around stopping individuals like it’s the Wild West in the L8 area.

She added that police behaviour scarred young men and led to mistrust for the police. The police said they had viewed body camera footage and decided they had acted properly – though how well positioned the police are to mark their own homework is likely to be a point of contention once again.

Featured image via Wikimedia Commons/Tony Hisgett, cropped to 770 x 403, licenced under CC BY 2.0.