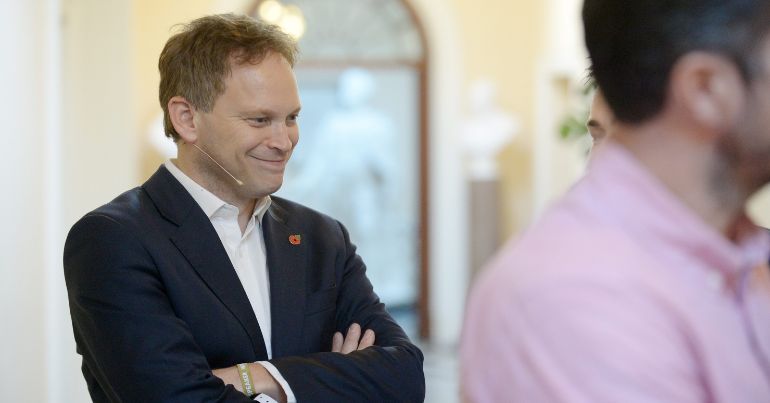 Failed Tory leadership candidate Grant Shapps got more than he bargained for today when he had a go at the Rail, Maritime and Transport (RMT) Union. The serving transport minister tweeted that the union’s strike plans would cause “misery” and “disruption”. Shapps is back in the office after his bid to replace Boris Johnson failed:

.@RMTunion creating further misery for passengers shows they're intent on causing maximum disruption and aren't serious about talks with industry.

Modernisation of our rail industry is an absolute necessity for the benefit of everyone, and that isn't going to change.

But the RMT, whose social media team has become renowned for its no-nonsense approach to Tories and capitalists, was taking no prisoners. It told Shapps he should get on with his job and stop tweeting nonsense:

Is this you not intervening again? 👇

Now you've abandoned your forlorn hopes for the job of Prime Minister, you can stop tweeting nonsense and get back to your day job which is to help sort this dispute out.#SupportRailWorkers https://t.co/eIjfRsDB8e

Harsh but fair, it has to be said. Shapps’ bid lasted only a few days before he pulled out and backed hyper-capitalist Rishi Sunak, who served as chancellor under Boris Johnson and is the richest MP in the land.

Shapps pulling out of the race is lucky if you share the views of TSSA trade union leader Manuel Cortes, who recently said Shapps “couldn’t run a bath“, let alone a country. Cortes told the Morning Star:

It’s beyond belief that he thinks he’s up to the job: Tory arrogance knows no bounds.

Since he’s a Tory, we must assume Shapps isn’t a fan of state intervention into the economy. Yet the RMT’s elected leader Mike Lynch had to explain once again today that Shapps is deeply involved in the stand-off between workers and rail barons:

#GMB presenter: Grant Shapps denies he should be involved in the negotiations

Mick Lynch from @RMTunion: "…that's completely untrue.. its written into the contracts that he [Shapps] is directly responsible for industrial relations on the railway, so he's not telling the truth" pic.twitter.com/F21cWNOGxt

So much for the free market. And despite Shapps’ talk of angry commuters and militant unions, Lynch reported that everywhere he had travelled, people were very supportive of the workers’ struggle for fair, safe conditions:

Mick Lynch, @RMTunion: “I have got people coming up to me in the street and when I’m travelling around London and all around the country, saying ‘Good on you."https://t.co/4yJ3oYk2sf

Shapps’ rant that the RMT was holding back progress was given short thrift too. Free marketeers constantly claim that pay cuts, competition and removing safety rules are actually good. But one Twitter user laid out the truth of the matter:

How does closing manned ticket offices, running trains with no guard or other safety-critical trained staff "benefit everyone"?
Your idea of 'modernisation' means cuts in quality of service.

While another pointed out that if it was modernisation Shapps was after, he’d be better off starting at the top with the massively overpaid private rail barons:

“Modernisation” should not mean cutting jobs, tearing up terms and conditions, destroying a work/life balance and enforcing an evil basic fire/rehire situation.
Start by modernisation of the management and their £500k plus salaries!

Shapps on the run

The notion Grant Shapps could have been PM is a bizarre one. Especially given he can’t even seem to handle the job he already has as transport minister. That said, his contempt for working people is precisely in line with the Tory norm.

What we do know for sure is that more strikes are coming on 18 and 20 August. And if the choice is between the Tories and working people, it’s a no-brainer which one des erves our support.