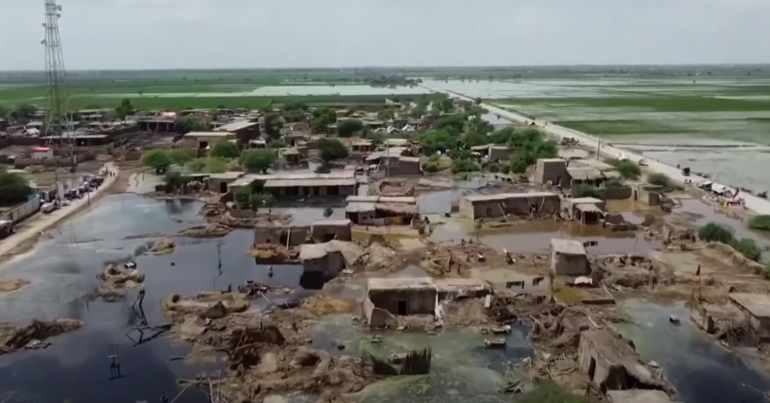 Floods in Pakistan have killed more than 1000 people, and left more than 33 million Pakistanis affected – that’s 1 in 7 people in the country. A third of Pakistan has been submerged in water. Pakistan’s climate minister Sherry Rahman said:

We have the largest number of glaciers outside the polar region, and this affects us. Instead of keeping their majesty and preserving them for posterity and nature, we are seeing them melt.

Pakistan contributes less than 1% of the global greenhouse gas emissions but yet, every year we keep on climbing up the ladder of climate vulnerability. According to the long-term German Watch index, Pakistan is constantly among [the] top 10 climate vulnerable countries.

The climate crisis cannot be viewed independently of global and political realities. The fact that Pakistan contributes so little to greenhouse gas emissions but faces the brunt of the impact is characteristic of the coloniality of the climate crisis. A report from the International Panel on Climate Change found that colonialism:

Plenty of people on social media urged greater understanding for this humanitarian disaster. Rapper Lowkey mentioned the sheer number of glaciers in Pakistan:

Terrible scenes in Pakistan. It has over 7,000 glaciers which are currently melting away.

Pakistan will pay a heavy price for climate change, even though it only contributes 1% of all global carbon emissions.

Urban and environmental planner Sana Gondal made clear just how far this disaster will reach:

It’s the consequence of colonial extraction & 1st world industrial discharge & the corruption of governance. We have to understand the problem is multifold- global AND local. Conversation directing all blame outwards are incomplete. But the external is central to the conversation

Of course, given that Pakistan is not a global power like the US or UK, coverage of the flooding has been patchy, to say the least. Teacher Ben See made a series of points about how this disaster is framed:

'countries agreed to recognize and “address” the loss and damage caused by.. dangerous climate impacts..

But the United States, despite being the largest historical emitter of carbon dioxide, has blocked such efforts at every turn.'https://t.co/3ZzTlMOvAE

It’s all too easy for media outlets from the global north to make it look like this flooding is just the kind of thing that happens in countries like Pakistan. But the truth is the impact of flooding in Pakistan is made worse because of the colonial climate crisis. The actions of Western countries like the UK, US, and Canada have directly created the deaths and displacement of people in Pakistan.

Likewise, Pakistan’s historically lacklustre infrastructure cannot be explained away without adding in the British empire’s impact. This makes it all the more galling when recovery plans are hindered further. Academic Faiza Shaheen pointed out that the so-called “bailout package” from the International Monetary Fund (IMF) will actually create more debt for Pakistan:

So worried for #Pakistan. Like so many other countries in the Global South they are on the frontline of a climate crisis they didn’t create. What’s worse, to rebuild they will get in even more debt with the IMF. Injustice on top of injustice #PakistanFloods https://t.co/QmYiOE1bPN

Establishment responses are clearly not good enough. For example, the secretary general of the United Nations (UN), António Guterres, said:

Let’s stop sleepwalking towards the destruction of our planet by climate change.

Today, it is Pakistan. Tomorrow, it could be your country.

This is exactly the kind of thinking which has led to the climate crisis disproportionately affecting indigenous populations and the global south. If the likes of the UK, US, and Canada were to take any kind of ownership of their disaster capitalism, they would acknowledge that they’ve led Pakistan to its current state. Instead, we’ve got Pakistan in dire need of relief and funds, faced with oncoming debt, and the secretary general of the UN implicitly warning white people that they should care because it might be them one day.

Until everyone can meaningfully reckon with how colonialism impacts the climate crisis, we’re all fucked.