Eddie Dempsey critique is fine, but withdrawing support for workers over him is telling on yourself - Canary 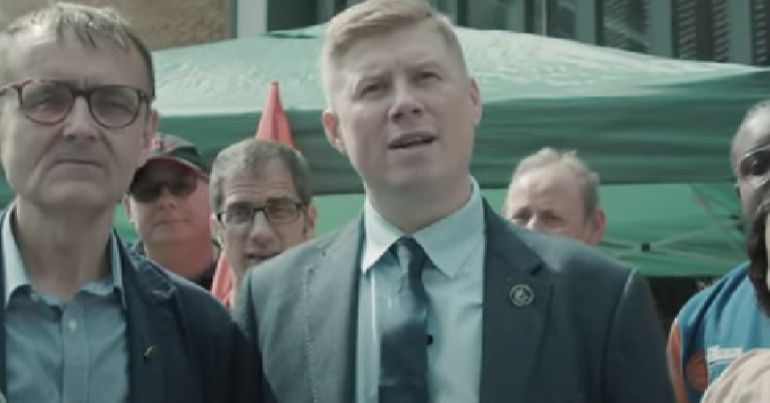 Twitter centrists have finally found a reason to justify why they won’t support something that, in truth, they were never going to support anyway. This time the ‘something’ is organised workers. The reason is the Rail, Maritime and Transport (RMT) union’s Eddie Dempsey.

Footage of Dempsey, who serves as an assistant general secretary in the RMT, was tweeted on Wednesday 31 August. In it, Dempsey laments the takeover of working class institutions (like the Labour party) by liberals:

I can tell you what, whatever you think about people that turn out for Tommy Robinson demos or any other march like that, the one thing that unites them people, beyond whatever other bigotry that’s going on, is their hatred of the liberal left.

And they are right to hate them, they are correct. Because they are the people who’ve seen their industries taken away, who’ve captured their Labour Party, and who are now talking to them like they’re the scum of the earth.

A group of centrist accounts used the footage to claim Dempsey was himself some sort of Tommy Robinson figure. One even accused him of being a “blatant fascist”:

Another Twitter user suggested he was using tropes from the “UKIP playbook”:

#EnoughlsEnough
What is going on here?
Is Eddie Dempsey (previously thought of as a good guy) really chanelling Tommy Robinson and quoting tropes from the UKIP playbook?
It has that feel? pic.twitter.com/GUHOuWuG65

Another used the footage to attack the Enough is Enough campaign, a coalition of unions and a handful of Labour MPs fighting for better conditions for working class people:

This is disturbing, incredibly divisive and tells me I’m right to think critically about the intentions of the Enough is Enough campaign.

Some of his speeches only fall slightly short of the kind of content you’d see at EDL rallies.pic.twitter.com/nlYo2WIcmF

But not everyone was convinced by the latest centrist meltdown. Many seem to think the footage is just a pretext for well-off pseudo-lefties to withdraw support for working class people, i.e., trade unions. This support, some say, never really existed anyway:

Waitrose Twitter finding out about far right views of Eddie Dempsey and then instantly making it the reason not to support strikes after trying and failing to cancel RMT over Ukraine & Brexit the week before is the reason we can never have a proper convo about racism on the Left.

One Twitter user called centrists out for never having any intention of backing workers, saying they should stop wasting people’s time:

If your position is "I will only support striking workers if Eddie Dempsey or XYZ union bureaucrat has politics I completely agree with", you're probably not really interested in supporting strikers in the first place.

Another pointed out that pretending to be very, very sad about the ideological purity of figures on the Left was out of place among the people whose political heroes destroyed Iraq:

The same Twitter user said he could come to his own conclusions about Eddie Dempsey without the help of “white leftists”:

I don’t need white leftists telling me how I should feel about Eddie Dempsey excluding people of colour from “working class” thanks. Solidarity with RMT members though!

Bad faith and centrist politics go hand-in-hand, and the Twitter centrist version of this is the most virulent of all.

Eddie Dempsey is a public figure and a senior trade unionist at a moment of working class uprising. He can, will, and should be critiqued for what he says and does. However, a fair-minded interrogation is not what seems to be happening in this instance.

As we’ve since in recent years, the support from ‘Waitrose Twitter’ for working class people is, at best, highly conditional. It’s nearly always purely about optics.

At the slightest breeze, their support will evaporate. The working class doesn’t need friends like this. By all means question Dempsey’s views, but if you actually care about workers, the answers should have no bearing on your support for the RMT, Enough is Enough, or any similar organisation.

Unless, that is, you never really had any solidarity – and if that’s the case, good riddance.