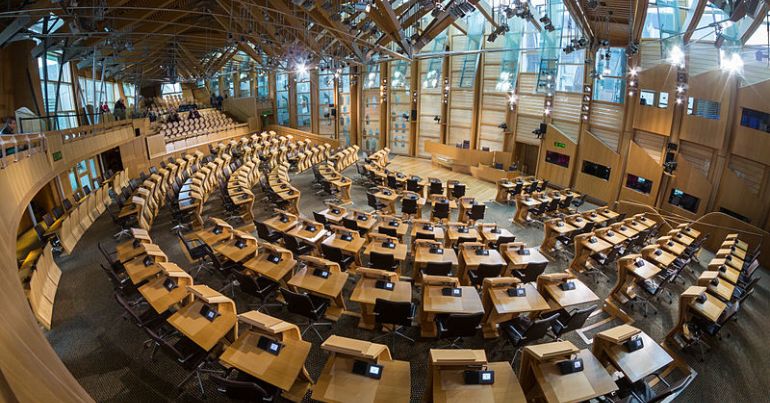 Applause broke out in Scottish parliament on 27 October as a new bill to make the process of gender transition easier passed its first reading.

The Gender Recognition Reform (Scotland) Bill passed stage one of its progress through the devolved parliament by 88 votes to 33, with 4 abstentions:

Gender Recognition Reform (Scotland) Bill approved at stage 1 by 88 votes to 33, with 4 abstentions.

Applause in the Parliament at the result

The bill is meant to make the often laborious process of transitioning easier. It would do this by streamlining the process of changing one’s name on legal documents like birth certificates.

The bill, which can be accessed here, was welcomed by many. Stonewall Scotland told Pink News:

This is another milestone in Scotland’s journey to join over 30 countries around the world who have moved to a demedicalised process for legal gender recognition, affording trans people dignity and humanity.

Fantastic news. MSPs vote overwhelmingly in favour for reform of the GRA at Stage One with 88 voting in favour and 33 against. The bill now moves to Stage 2 and we look forward to working with all MSPs as the Bill continues its legislative process. #ComeOutForTransEquality 🏳️‍⚧️

Most of the major political parties celebrated the news. Among them were the Scottish Greens:

A Liberal Democrat MSP welcomed the development, saying that every day the reforms were not enshrined in law harmed trans people:

I was proud to rise for my party to speak in favour of the Gender Recognition Reform (Scotland) Bill in Parliament today.

Every day we don’t reform Gender Recognition Act, it continues to harm our trans citizens. A simple change to law that will make a world of difference. 🏳️‍⚧️

Meanwhile, a Labour MSP described the bill as “essential”:

Today I proudly voted for the GRA and so did the parliament💗.

Today is a good day.

Reform is essential. Trans people have waited too long. Let’s get this done.

Here’s what I said👇: https://t.co/Kcyze5WLzD

Even a Tory MP broke with his party to vote for the bill. Jamie Greene told his fellow politicians:

I know what it feels like to be told how you feel is just a phase or somehow be suppressed, or even worse you are immoral, delusional or mentally ill, destined to a life of misery.

He said that there was work to be done:

Let me clear, outcomes for trans people in Scotland are shockingly poor – poor access to medical help, poor access to physical and mental health, high rates of suicide and self harm, and failure to tackle growing transphobia. This bill fixes none of that, maybe it should.

It can only be hoped that the bill passes through parliament smoothly. What’s more, is it hard not to agree with Jamie Greene. This bill is a step in the right direction and should be lauded, but there is still plenty to be done to make sure trans people can live their lives with the dignity they deserve.