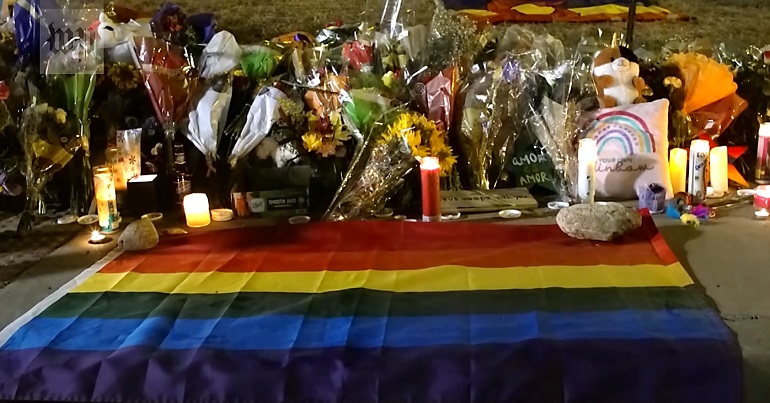 A murderer killed five people at Club Q in Colorado Springs, US, on Saturday 19 November. Since then, more details and reactions to the massacre have emerged – laying bare some of the hate and bigotry that led to people’s deaths in the first place.

Club Q: another attack on the LGBTQIA+ community

As the Canary previously reported, the murderer opened fire late on 19 November, killing five people and injuring dozens of others. Club-goers restrained him until police arrived. Some background information on the murderer has been released:

Police identified the suspect as 22-year-old Anderson Lee Aldrich, and said he had used a long rifle at the club. Aldrich is reportedly the grandson of Randy Voepel, an outgoing Republican state legislator. Voepel was a vocal supporter of the 6 January Capitol riot, which he called the “first shots fired against tyranny.” The shooting is the latest in a long line of attacks on LGBTQ+ venues in the United States, the deadliest of which claimed 49 lives at Pulse nightclub in Orlando, Florida, in 2016.

What is already becoming apparent is the massacre of five LGBTQIA+ people shows queerphobia, homophobia, and transphobia are deadly and damaging.

Take the police as an example. As one Twitter user pointed out, officers held the person who stopped the murderer in a police car for an hour:

When the police arrived they arrested the person who took down the Q Club mass shooter and locked him in a police car for an hour while he pleaded to be allowed to find out if his family was okay. ACAB pic.twitter.com/6X3UYSkvio

Time and time again the role of the police is to exacerbate trauma and punish anyone who uses their agency to help others. They are not here to help us, they are here to punish and control. Fuck the police. We protect us.

As poet Saeed Jones pointed out, LGBTQIA+ people are criticised for wanting nothing to do with the feds:

With Club Q in mind, I woke up thinking about how in 2021, @nytopinion acted all offended because “L.G.B.T.Q.” activists wanted NYPD officers to stop marching in the Pride parade in uniform. It’s almost like us “L.G.B.T.Q.” people have pretty good instincts about who to trust. https://t.co/PIJgyEYZyM

And if it wasn’t enough that someone murdered five people out of apparent hatred for who they are, other bigots are still pushing their wretched agendas off the back of innocent people’s suffering. As the Canary previously wrote, so-called ‘charity’ the LGB Alliance is vehemently anti-trans. It:

focuses its efforts to a greater extent on the denigration of trans individuals than they do the support of lesbian, gay and bisexual rights – particularly in their repeated focus on vulnerable trans children.

So, it’s unsurprising that the organisation’s tweet in response to the massacre was equally unpleasant:

A trans man was one of those murdered at #ClubQ last night. His name was Daniel. Yet your solidarity is not even extended to him or other trans victims.

Your hatred is a sickness. You are a disgrace to all LGB people. https://t.co/SzE8FVxCim

Meanwhile, the Guardian – which has repeatedly published anti-trans writers in an attempt to show fake ‘balance’ – suddenly pretended to be on the side of trans people:

Imagine having the gall to have this published *in one of the hate rags cheering on transphobia.*https://t.co/4kwgSsShIj

Ultimately, though, for now we should be remembering the victims:

Two of the five people murdered at Club Q in Colorado were trans. They were murdered on trans day of remembrance. My heart is so heavy with the immense loss our community is suffering right now. But mostly, I'm so angry and filled with rage.

He bought lashes for drag queens who couldn't afford them and groceries for people who lost their jobs during the pandemic. Every Thursday, he sang "Runaway Train" off-key with all the passion he could muster. On Derrick Rump, the "glue" that bound Club Qhttps://t.co/8CJtBjMLzY

Let’s never forget their names and the joy they brought to their friends and families. Rest in power. pic.twitter.com/rN1eCl302i

Members of the LGBTQIA+ community are rightly feeling scared right now. The venom and hatred behind the Club Q murderer’s actions are not far from the views of many in wider society – however much rainbow paint you try and whitewash it with. Moreover, some people would have many of us dead. Now is the time to remember the victims, but we mustn’t wait too long before turning grief into action. Our spaces are not safe; people are violating our right to live safely with respect and dignity. The threat is real – and must be opposed.