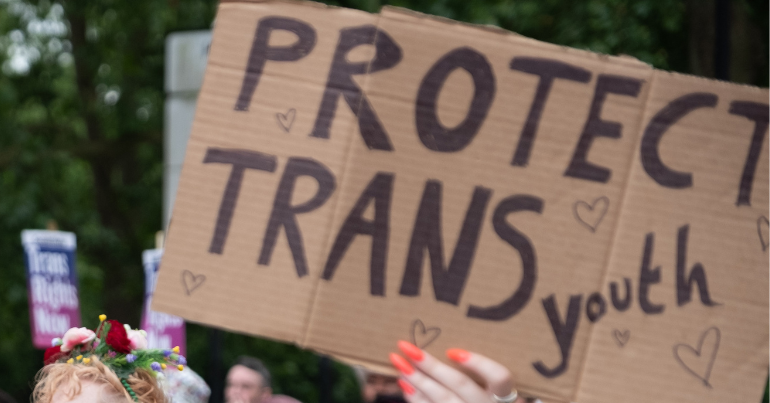 Today marks the sixth day of Mermaids’ appeal against the LGB Alliance’s charity status. For their part, Mermaids is a charity supporting transgender, non-binary, and gender-diverse young people. LGB Alliance (LGBA), on the other hand, describes itself as standing for the “right to live as same-sex attracted people without discrimination or disadvantage.” However, it is commonly argued that LGBA mainly exists to propagate transphobia, and the original decision of the Charity Commission to grant them charity status was met with widespread condemnation from the LGBT+ community.

LGBA – a history of phobia

After its founding in 2019, one of LGBA’s first actions was to begin a letter-writing campaign to the Equality and Human Rights Commission (EHRC). As part of this campaign, LGBA attacked what it called “Stonewall Law” – the guidance given by the popular LGBT charity Stonewall to places of work which seeks to help prevent discrimination on the grounds of gender identity. Notably, LBGA claimed that Stonewall was trying to replace the term “gender reassignment”, which is used in EHRC guidance.

During its brief and troubled existence, the LGBA has become embroiled in several accusations of homophobia. Its Twitter account once suggested that it wasn’t homophobic to oppose gay marriage because relatively few gay people actually got married, to which it added the hashtag “#notabigdeal”. It also tweeted that:

Adding the + to LGB gives the green light to paraphilias like bestiality – and more – to all be part of one big happy ‘rainbow family’. Wake up policy makers.

More recently, charities watchdog the Fundraising Regulator found that LGBA made a false statement that it was the “only registered charity set up to protect and promote the rights and interests of people with LGB orientation”. The regulator found that LGBA had breached the code for the misleading nature of its statement, and in its handling of the subsequent complaints.

The case against LGBA is being spearheaded by Mermaids, but they are being supported by the LGBT+ Consortium, Gendered Intelligence, LGBT Foundation and TransActual, as well as being crowdfunded by the Good Law Project.

As the basis for its appeal, Mermaids stated that a charity must be set up for charitable purposes, which are pursued in a manner wherein their benefits outweigh any harm caused. It contends that LBGA fails to meet this definition of a charity. It has also pointed out that whilst LGBA claims that it was set up to promote lesbian, gay and bisexual rights, its founder Bev Jackson explicitly stated that:

We’re applying for charitable status and building an organization to challenge the dominance of those who promote the damaging theory of gender identity.

So far, evidence has been heard on behalf of Mermaids from John Nicolson, a Scottish National Party MP, and the chair of Mermaids, Dr Belinda Bell. Nicolson gave evidence on LGBA’s political campaigning against trans rights, including its opposition to Gender Recognition Act reform in Scotland. Notoriously, LGBA ran advertisements opposing GRA reform in the Scotsman, which Nicholson stated were:

riddled with falsehoods and repeatedly misrepresented the law.

Dr. Bell clarified Mermaids’ use of sex and gender terminology, and criticised LGBA for its focus on trans children. She stated that:

based on its public communications, LGB Alliance appears to take the view that trans children do not exist, or that they cannot know they are trans before adulthood.

This evidence supports the case that LGBA focuses its efforts to a greater extent on the denigration of trans individuals than they do the support of lesbian, gay and bisexual rights – particularly in their repeated focus on vulnerable trans children.

On the third and fourth days of the hearing, statements were heard from LGB Alliance’s co-founders Bev Jackson and Kate Harris, clarifying their description of LGBA as “gender critical” – i.e., a belief that human sex is immutable.

The cross-examination focused on Jackson’s apparent belief that trans-inclusive definitions of sexuality are homophobic. The court then moved on to hear more on the history and conduct of LGBA.

Whether or not Mermaids is successful in repealing the charity status of the LGBA, the case could have a number of worrying outcomes. First and foremost, the court has stated that even if:

the Tribunal directs LGB Alliance’s removal from the register, LGB Alliance will be in the same position as countless campaigning bodies in the UK that are not registered as charities

This case could merely affect how LGBA is permitted to represent itself to the public.

Likewise, LGBA’s case is being represented by Karon Monaghan, a panel member of the EHRC, and Akua Reindorf, a commissioner for the EHRC. Notably, they are not acting in their capacity as members of the EHRC. However, it remains deeply troubling that an organisation which should be defending the rights of all LGBT individuals has members which are openly working against trans causes.

Finally, given the state of Britain’s deeply transphobic press, it could be the case that even if the LGBA is defeated, this fact could simply be ignored. This was the case recently for Allison Bailey, a founder of LGBA, who took Stonewall to court on the basis that its advice to her employer, Garden Court Chambers (GCC), led to her dismissal. Despite losing the case against the LGBT rights charity, it was widely headlined that she had won, on this basis that she was awarded £22,000 from GCC for injury to her feelings.

The case against LGBA is set to continue for some weeks yet, and the trans population of Britain awaits the verdict with trepidation. However, win or lose, the potential remains for this case to be spun to transphobic ends.