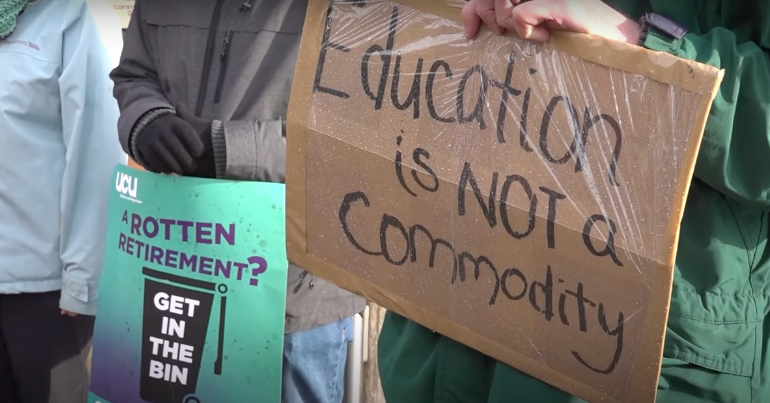 On Thursday 24 November, BBC News ran an article on the University and College Union (UCU) strike. It went down like a lead balloon with staff and people on social media alike. This is because BBC News was clearly promoting nonsense propaganda over pay – at the expense of striking workers.

The Canary has been following the UCU’s industrial action. As we previously reported, 70,000 staff at 150 universities walked out on 24 November over pay, pensions, and working conditions. Bosses have cut workers’ pay by around 25% since 2009, while they also want to slash their pensions by 35% too. All this has led to the UCU and its members striking.

Workers were out across the UK:

Absolutely wonderful show of creativity, #solidarity & talent from the students of @ManMetUni in support of the @manmetucu picket line this morning. If only Uni management could show the same understanding of what they have under their noses. #ucurising pic.twitter.com/anFTNterjL

Other trade unions showed their support for the UCU:

Postal workers strike today. But our union supports every worker that stands up for their rights.

That is why we also send solidarity to members of @ucu @EISUnion and every other union that is taking action today.

Good to see @RMTunion Mick Lynch, on his way to see the Secretary for State, taking time out to pop along to a @ucu picket line
🤝 #ucuRISING https://t.co/pn4emgIoBy

Of course, despite this widespread support, our public service broadcaster couldn’t possibly have given balance in its reporting. Instead, BBC News covered the strike with what many people are claiming are a pack of lies.

BBC News ran an article on Wednesday 23 November with the headline:

University Strikes: Will my lectures be cancelled?

And, true to form, the BBC changed the headline  – and it didn’t go down well:

This is the framing promoted by the UK's national public broadcaster. It is, you'll note, identical to the framing offered by the employers' side.

It relies for clicks on the kind of angry response Mike offers here, and is carefully designed to foster it.https://t.co/B6OTH6vijt pic.twitter.com/MCeS0muVnW

However, what the BBC didn’t change were its claims about university pay:

This from BBC news made me laugh (in despair). Principal Lecturer (whatever that is) is defined by ‘having a record of original research.’ My friends, most research assistant and teaching fellows have that …. We’re all definitely due a pay rise! pic.twitter.com/X8xv62yYR6

Film studies lecturer Louis Bayman explained that the infographic from the BBC didn’t even get the basics right:

These figures are false: few teaching assistants make £10,000, let alone three times that. Meanwhile our pensions have been cut by 35%. Two reasons why I'm striking today as part of #UCUstrike #ucuRISING https://t.co/ibkbDh1GPi

Another Twitter user had a wry laugh, given that the BBC doesn’t seem to consider how academics are often overloaded and overstretched:

Good to start the day with a laugh. Even if it is bitter. Please do also post our average ACTUAL workloads. #UCU estimate we’re all working two days a week for free. At times, I’ve worked more than that. No wonder rates of mental health issues are so high in HE staff. https://t.co/L2nxWIcWbK

The idea that research assistants could make almost £32k a year was laughable to anyone who’s actually worked in higher education:

I’m sorry, but the idea that ‘teaching assistants’ get almost £32k a year made me snort derisively into my tea. I’ve seen, and applied for, full time positions offering 2/3 of that. Often at the most prestigious institutions too. https://t.co/j9ERZvgaV7

I’m looking at that and genuinely fuming. I worked for a top-ranking Russell Group uni where I was a Research Assistant and was paid £12.5k pro rata for working 3 days a week for 10 months. Abysmal.

I look forward to seeing many of you on the picket line tomorrow!#ucuRISING https://t.co/nU3gh8zkbb

As the latest UCU strikes kick off, this scandalous reporting from the BBC shows exactly why those of us who believe in workers’ rights need to stick together. Mainstream media can cover up the truth as much as it likes, but workers on picket lines are there to defend their rights and push back against the BBC’s lies. It’s simply not true to present academics’ wages as so high when we know that it’s actually university bosses who take home the big money. Instead, workers are the ones who are overworked. It’s more important than ever to follow the example of union leaders like Mick Lynch and show solidarity with workers no matter which union is on strike – we’re all in this together.