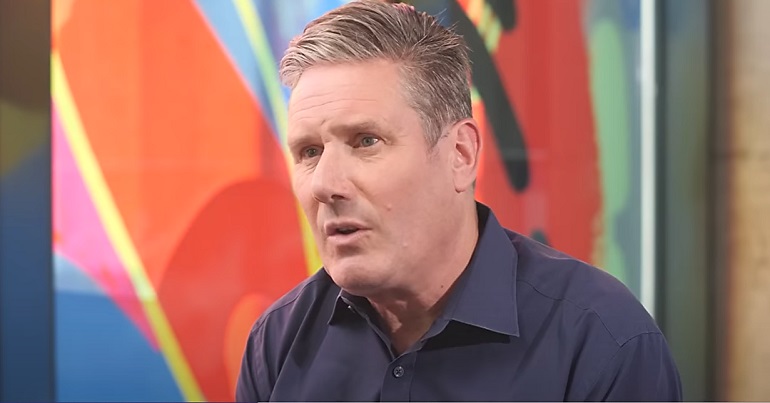 Keir Starmer is the leader of the Labour Party.

No, it’s true! Even though his actions in recent days would make you think otherwise – more so than usual, that is.

Starmer has already exposed himself as a charlatan – he ditched the 10 left-wing pledges that got Labour members to elect him as leader. Aside from this, the Labour leader has consistently shown he is as centrist as they come – his purge of left-wing members being the prime example. However towards the end of November Starmer went full-on centre-right, in a series of actions which may make some Tories blush.

On 21 November, Starmer hosted execs from arms manufacturer British Aerospace Systems (BAE) Systems in his office. The Mirror called this an attempt to “woo business”. However, as Owen Jones pointed out, courting death merchants isn’t exactly a good look:

Absolutely gross! Defend him all you want, but don't pretend you have a moral compass when you do! https://t.co/MADrmk7L79

So, what do you do after you’ve jumped into bed with a firm that makes bombs? If you’re Starmer, you tell the victims of those bombs that ‘you’re not coming over here, taking our jobs!’. As the Canary previously reported, Starmer used a speech on 22 November to say that:

our common goal must be to help the British economy off its immigration dependency. To start investing more in training up workers who are already here.

That, of course, came after he had previously said similar – but specifically about NHS workers. When Nigel Farage is praising you, that really should be a red flag. Not for Starmer, though – who continued on his right-wing journey.

Lapped-up by the right-wing press

The Labour leader has been heavily criticised in the past for having dealings with the Sun. Clearly, he didn’t care – on 23 November he attended the right-wing shitrag’s Who Cares Wins awards, which celebrates NHS “heroes” (don’t click the link!). One Twitter user even claimed Starmer missed his Constituency Labour Party (CLP) meeting to attend the nonsense Sun bash:

Last night Holborn & St Pancras CLP held their first in-person CLP meeting since the Covid lockdown. Their MP #SirKeirStarmer told them he couldn't be present as he had an "important meeting to attend." The 'important meeting' turned out to be #TheScum awards party. #Sun #Starmer pic.twitter.com/aPwaxcqfmb

The Sun previously helped push the Tories’ NHS privatisation agenda – so it’s the perfect, hypocritical, cynical bedfellow for Starmer. However, if you thought Starmer and the Sun were a right-wing match made in heaven – it gets even better.

As the London Economic reported, on Wednesday 23 November, right-wing libertarian hate-rag the Spectator gave Starmer its “politician of the year” award. The Labour leader said:

This is a real honour. I don’t expect to be endorsed by The Spectator at the next election, but I look forward to disagreeing in the battle of ideas.

There is no “battle of ideas” with the Spectator, Starmer. It promotes racist narratives – so, no we shouldn’t ‘battle ideas’ or debate with an outlet that legitimises hate speech:

The Spectator ran a story with the headline 'There is not nearly enough Islamophobia within the Tory Party'.

Here is Keir Starmer accepting an award from them. pic.twitter.com/koHJVGpDvQ

Starmer wins politician of the year from the Spectator, a paper which once ran a piece called ‘In praise of the Wehrmacht’.

in light of recent news, here are some spectator greatest hits: pic.twitter.com/AFjUVhRoEg

Oh, but of course! Starmer is a racist too! So, much like the Sun, the Spectator is a perfect bedfellow for him. It’s likely that both these outlets are quite happy with that, too – given that Starmer is likely to win the next general election:

If Keith Starmer cared about racism *at all*, he would not have been *given* the "Politician of the Year" award by the Spectator. https://t.co/zlNerbNQic

Starmer has killed the democratic socialist elements of the Labour Party that were flourishing under Corbyn. Starmer is a con artist who has left the public with a political choice of Tory far-right politics or his own centre-right brand. That’s no choice at all.