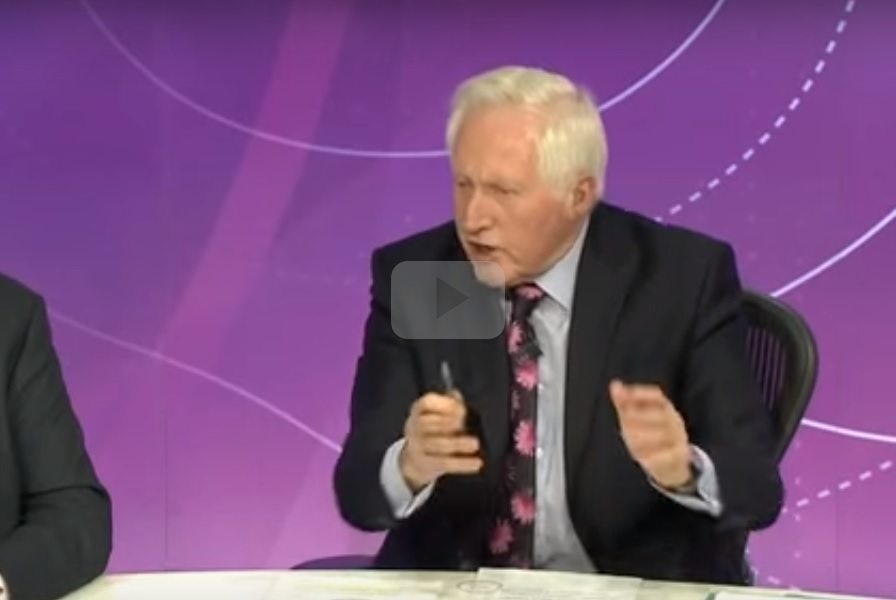 On 9 June, the BBC Question Time debate was once again dominated by the issue of immigration – and its relation to the upcoming EU referendum. But this time, it was the programme’s veteran presenter, David Dimbleby, who made one of the most poignant contributions.

Responding to Conservative MP Chris Grayling, who is Leader of the House of Commons and a campaigner for Brexit, Dimbleby exposed the hypocrisy at the heart of the Tory Brexit argument on immigration. Grayling was arguing that leaving the EU would allow Britain to reduce the number of migrants entering the country, but Dimbleby pointed out:

There’s an interesting point here. Your party said they would reduce immigration to tens of thousands… and then you say you can’t control EU immigration.

184,000 people are coming from outside the EU. So even on the bit you can control, you’ve done nothing to bring the numbers down. Why is that?

Grayling was clearly caught off guard, and was unable to defend his government’s record on immigration. And by showing his lack of credibility on immigration (and that of other Tory Brexiters by extension), the Question Time presenter drew rapturous applause from the programme’s audience. But he hadn’t finished making his point, and directed himself towards Grayling again:

You’re saying ‘leave the EU, that will solve that bit of the immigration’, but what about the 184,000 that you’ve had years to put right? You haven’t… So you’ve failed on that… So why should anyone believe that you’re going to succeed by leaving the EU, if you can’t get the bit you can control right?

In May, the Office for National Statistics released estimates suggesting that net migration to the UK in 2015 had risen to 333,000 – the second highest figure ever, and under a Tory watch. According to the BBC, however, EU immigration had actually remained “relatively stable“. And while net migration from non-EU countries stood at 188,000 (Dimbleby was off by 4,000 in his comments), the reality is that other countries in Europe are actually taking on many more refugees than the UK.

Obviously we can’t accept every refugee out there but that’s one of the main reasons the EU was set up: a network of aid across nations to deal with the huge amount of refugees post WW2 in a humanitarian way.

One of the main issues at the centre of the EU debate is immigration. Is it good or is it bad? And the Remain and Leave camps tend to provide these respective answers.

Brexit campaigners like UKIP leader Nigel Farage have spoken about migrants placing pressure on schools, hospitals, and other public services. Remain campaigners like Labour MP Clive Lewis, on the other hand, insist that this idea – pushed by Brexiters and their supporters in the right-wing media – is simply confusing citizens as to what the real issues surrounding immigration are. Lewis insists:

The reason people are concerned about immigration is partly because of the hysteria that some politicians and newspapers are whipping up on this.

Some communities can change dramatically and rapidly, and that can be disconcerting for some people… That doesn’t make them Little Englanders, xenophobes or racists… More people living in an area can put real pressure on local services like GP surgeries, schools and housing…

But as he clarified:

He slammed the Conservative government for squeezing and cutting public services. And he also criticised the Cameron regime for scrapping a special public fund aimed at supporting areas with considerable numbers of migrants, saying:

By abolishing it, David Cameron’s Coalition undermined the proper preparation and investment that communities need to adapt. We would restore it

At the same time, Shadow Foreign Secretary Hilary Benn – who also appeared on BBC Question Time, spoke about the need for immigration, saying:

And economically speaking, he said:

immigrants contribute more into our economy than they take out

Whether we believe the strains on British communities today are down to the Conservative austerity policies or down to immigration, however, one thing we can guarantee is that you will be hearing many more of these arguments over the coming days.

The key thing to remember is that this a question of resources. The government could build more schools, hospitals, and affordable housing rather than giving huge corporations tax breaks. But it chooses not to. The people fleeing wars (fueled by UK foreign policies), or just looking for work, are not the ones to blame for this pressure on resources. The people who are truly to blame are those making vast profits out of all of us, whichever country we’re from. And that needs to be the key consideration when we vote on 23 June.

You can see the whole Question Time debate here:

– See other articles at The Canary on the EU referendum, immigration, and refugees.

– If that’s not enough, why not join the Refugees Welcome campaign, back the efforts of Action for ESOL, sign this petition, support the City of Sanctuary projects, and write to David Cameron and your MP to ask them to do more to support refugees.