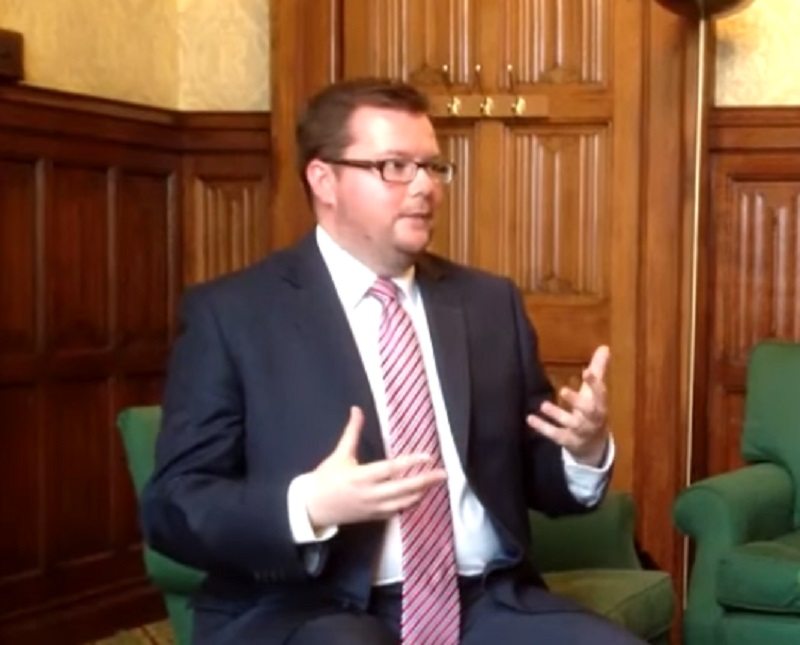 Conor McGinn, Labour MP for St Helens North, has been embroiled in a row within his local constituency Labour party (CLP) – after reporting a group of members to the police and publicising it in an article for Politics Home. Evidence has come to light that McGinn’s claims may form part of a continued smear campaign against the progressive wing of the party.

McGinn, who has received some notoriety of late – firstly being accused by Sky News of instigating the attempted Labour coup, and then tweeting that Jeremy Corbyn had threatened to “call his Dad” – said in the article that:

Jeremy’s supporters have subjected me […] to a torrent of abuse and threats. In my constituency, a group of people gained access to my shared office building under false pretences and filmed themselves protesting outside the door […] in an incident that has been reported to the police. They threatened to disrupt my surgeries and events I was attending, requiring me to have a police presence at those last weekend.

But The Canary has learned that McGinn appears to be following in the footsteps of his colleague Angela Eagle. That is, exaggerating the truth somewhat. Speaking exclusively but anonymously to The Canary, several members who were present at the time of the alleged “protest” tell a different story.

According to witnesses, on 7 July at around 7pm, 10 female members of the Labour party arrived at McGinn’s office at Century House in St Helens. The women were strangers to each other, and had arrived independently. They’d chosen to attend after being told by local councillors that a CLP meeting was taking place there, and a vote of confidence in Jeremy Corbyn was to be held. St Helens CLP operate a “General Committee” system; that means that delegates from branch parties and affiliated groups are nominated to be representatives, and not all members have a right to vote.

The women that wanted to attend were aware of this, however as one told The Canary:

We can’t vote but we could attend to listen, and that’s all we wanted to do was listen to their reasoning as we already knew which way the vote would go.

Having been advised that there was a meeting going on, and directed to the appropriate room, one member said:

We went up to the room and the lights were on. We knocked but there was no answer, so we waited a few minutes – and then the lights went out. We kept knocking but nobody responded. After repeatedly trying we went down spoke to security. They had no clue so we left and all stood outside talking for a while.

It was at this point that McGinn and some other Labour representatives exited the town hall (not Century House) opposite his office. The witness says:

We decided if we all went over in the current climate we’d be accused of threatening them. So we nominated two ladies to go over and speak to them, while the rest of us stood over 20 metres away. There was no shouting or threats – it was all quite civilised. But the next thing we know? Conor says we were threatening him in an interview.

Another witness, who was one of the women who went and spoke to McGinn and his colleagues, said:

None of us knew each other but had been told by councillors where the meeting was. After leaving McGinn’s office we tried the town hall but it was locked. We waited an hour and 40 minutes, but then saw McGinn and some councillors coming out of the town hall. When we first approached them they were laughing.

We challenged them regarding the confusion over the venue, but they were very condescending and arrogant. There was only me and one other female member who actually approached him, and there was six males with him. But he said in his article we were intimidating him? He just did not like the fact that they had been caught being underhand and then challenged.

So, it would appear that this group of members had been fed incorrect information about the venue for a CLP meeting; that McGinn and local councillors/delegates had conducted the meeting behind locked doors, and when questioned shrugged off members’ genuine concerns. But if you read McGinn’s comments in his article, you’d be led to believe that a group of thugs had ransacked his office, and threatened him so severely that he required police protection.

When the women weren’t being vilified as thugs by McGinn, they were being patronised by a St Helens councillor  – who then promptly deleted the tweets: 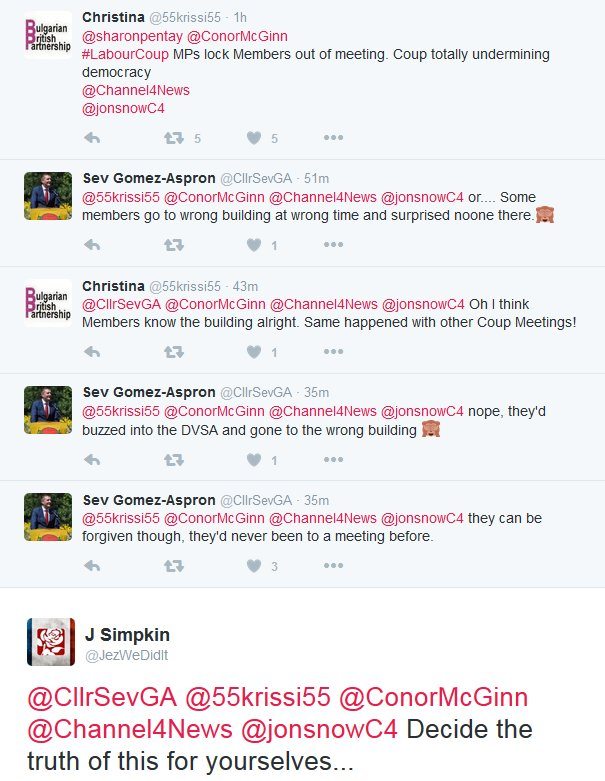 Whether or not the women had a right to be at the meeting in question is another matter. 17 year-old Oliver Simpkin, secretary of St Helens and Knowsley Young Labour, posted this explanation over the meeting confusion: 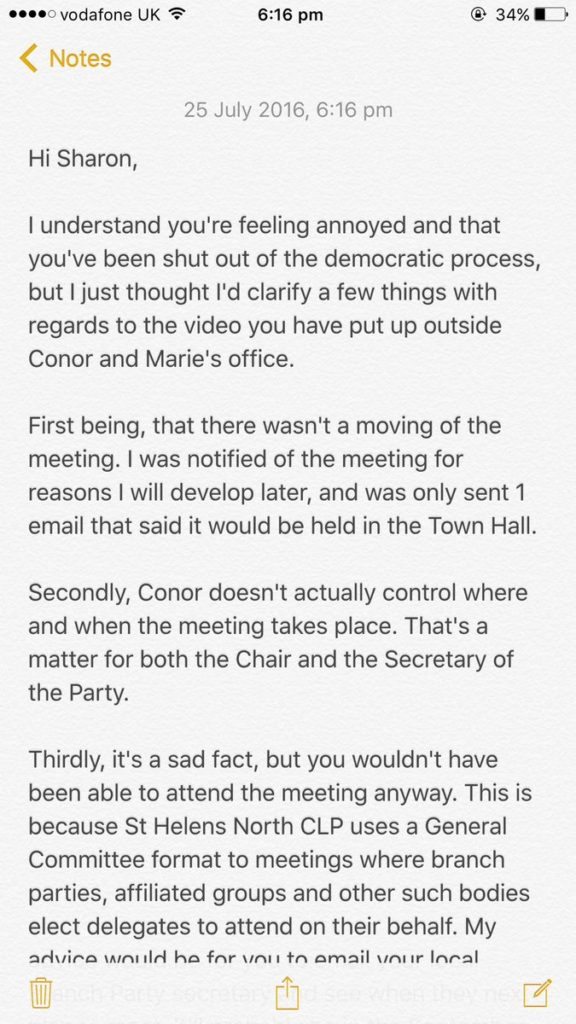 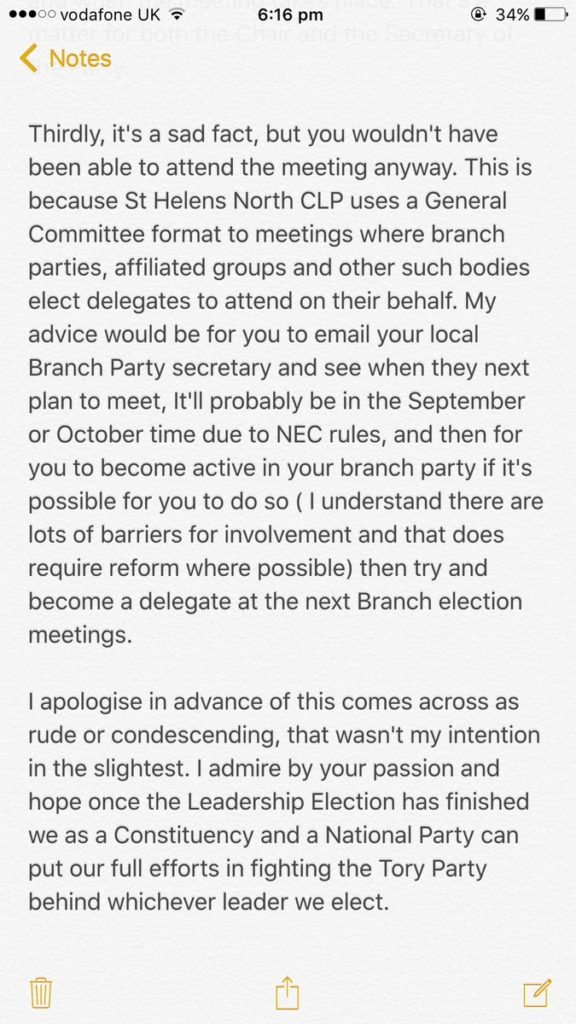 The above may well be the case – and an issue that surely should be addressed in relation to the democratic nature of certain CLP’s.

What’s sad is that a potential miscommunication which could have been resolved in moments and with respect, has been whipped into a threat of terror in order to further one MP’s political agenda. As is repeatedly becoming the “norm”, claims of abuse and threatening behaviour, when no such thing has occurred, only serve to undermine and discredit legitimate accusations by victims. It is a sorry state of affairs when conservative members of Labour’s parliamentary party seek to employ such demeaning tactics, simply to gain political points over the progressive wing of the party.

Here is the video of the incident in question: