The Labour Party has issued another ban on pro-Corbyn members, and it's ridiculous [IMAGE] - The Canary

Constituency Labour parties (CLPs) have become a battleground in recent weeks, representing the divisions within the Labour party as a whole. Some have been suspended for acts of support for party leader Jeremy Corbyn. Others, on the other hand, have been enforcing rules that seem to disenfranchise newer Labour members – which are considered to be largely supportive of Corbyn.

In particular, Labour members who have joined the party since 12 January 2016 have been banned from voting in the upcoming leadership election. This has not got down very well. In the next few days, it will be challenged in court by a group of young party members who have been raising money online for their cause and insisting on their right to vote.

One Labour party member who has joined since January told The Canary:

And in the following message sent to The Canary from Calder Valley CLP and dated 24 July, this practice was described in greater detail: 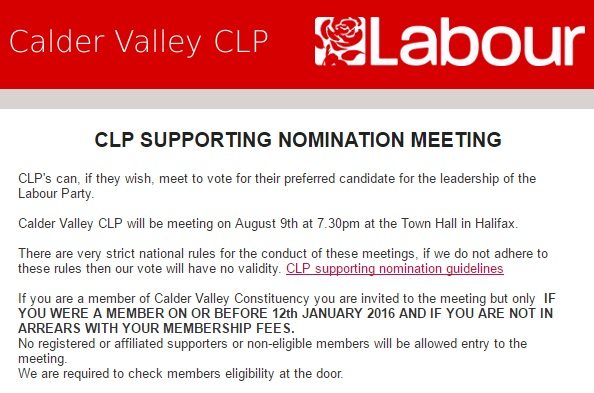 The Labour website says, without any specifications about the time members have been in the party, that CLPs “can choose the members from your area to represent you at annual conference”. But new members have recently found out that they cannot be chosen to represent other members at the national conference in September.

Bridget Chapman, who The Canary mentioned in its previous post on this issue, recently gave us more details about her status as an elected delegate to the Labour party conference being cancelled. We pointed out that the Calder Valley CLP had argued that delegates for the national conference had to have been members for at least 12 months before 24 June 2016, and Chapman confirmed that both her own CLP (Folkestone & Hythe) and Thanet South had also been affected by this rule. She also said:

Chapman was told she could apply for a “Members pass” if she still wanted to attend the conference. But for her personally, there was an economic cost of her initial rejection:

I have paid a delegate fee of £116 – there is no mention of returning this. In addition I paid up front for a hotel at a cost of just under £200. So I’m £316 down and have been disenfranchised.

Labour’s procedural rule quoted in the email sent to her was Chapter 3, Clause 1, Rule 4F, which states:

All delegates must have been individual members of the Party for at least 12 months at the closing date set for the receipt of names of delegates.

The fact that this decision is backed up by official rules will mean little to new Labour members who feel like their voices are not valued as much as older members.

As expressed earlier in this email, however, new members are fighting back – challenging their disenfranchisement from the leadership vote and paying £25 for the right to vote as supporters. So while the rules barring new members from participating in supposedly democratic processes seem to protect the Labour party’s established order, the tides of change may well prove to be too strong to hold back.

– If you’re a Labour member and have queries about the national conference, you can contact Conference Services on 0345 092 3311 or [email protected]

– See more from us on the Israeli-Palestinian conflict here.

– Support The Canary so we can keep bringing you the news that’s important to you.