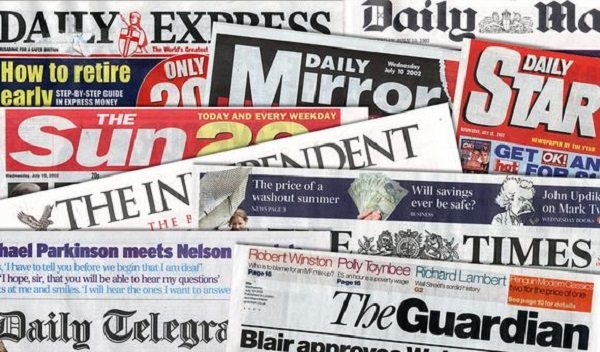 Why don’t journalists and media outlets just report the facts, then leave you to form your own opinion? I get asked this question fairly frequently, and it strikes me that very few journalists ever answer it honestly and in full. So that’s what I’m going to attempt to do here.

Even the act of reporting that something happened is a subjective choice. Why? Because every moment of every day a million and one things are happening all over the world. The choice of which ones constitute ‘news’ is itself an editorial and subjective decision. Right now, an elderly women is falling down the stairs in Neath, a child is being abducted in Hull, a teenager is being racially abused in Belfast, a homeless man is receiving the support of a crowdfunding campaign in Glasgow, a million refugees are dehydrating in the heat of a camp in Jordan, and so on, and so on. If the news media was simply a rolling list of all events ‘happening’ in the world, there would no opportunity to analyse their significance, or their meaning. Which brings me to the next point.

The second issue rests on the purpose of news media. In the main, people don’t read, watch or listen to the news just to hear what happened – but also to try to understand what it means. This is also subjective. The idea is for media outlets to provide a space for experienced and equipped experts to provide some context for what has happened, why it happened, what might happen as a result, and the likely impact. The reason that some have now become almost allergic to “experts” is not (as some of the pundit class have framed it) because people up and down the land have suddenly lost all respect for expertise. That is a gross and fairly outrageous misrepresentation of what is happening. What people have become sick of is the misuse of expert opinion, the lack of diversity of expertise represented, and the very definition of what constitutes an expert.

The same neoliberal economics commentators who failed to predict the Financial Crisis of 2007/8 were the same ones giving their forecasts on the impact of Brexit. The same neoliberal economic institutions (IMF, European Central Bank, World Bank) who ravaged the economies of countries across Europe (Greece etc), Latin America and Africa with first Structural Adjustment Programmes, and later Austerity, were the same ones warning of the economic consequences of Brexit. The same political analysts who endorsed the war in Iraq on the basis that there were weapons of mass destruction, are the same political analysts encouraging engagement in Syria and beyond. It is not unreasonable for the public to have lost faith in the expertise of the pundit class, and be searching more widely for deeper and better analysis. In fact, it sounds like basic common sense.

The fear driving that move from the public is that this failure to provide commentary from multiple ‘expert’ voices constitutes propaganda. A fear that when we consume news, we are only being given a limited perspective, or even a false or misleading one. This is a very real concern. One that has been exacerbated by the increasingly narrow window of permissable views (economic, social, political) represented in the mainstream and commercial media. There are highly qualified and skilled analysts in the world of politics, economics and social policy who never get a presence on our mainstream and commercial media because they do not conform to that narrow window of permissible views.

So how do we counter that?

As consumers of news, critical thinking is the key. Given the importance of this skill in enabling a person to fully participate in the democratic process, equipping every citizen with the tools to read news reports analytically should be a basic part of our education system. I can remember arriving at university and beginning to study critical thinking, and wondering why on earth no one had bothered to teach me this before. At no stage in the 13 years of my primary and secondary education (state comprehensive), did that form part of the syllabus. Doesn’t that strike you as absurd?

Of course, this will take time, and the commitment of democratic leaders and movements that actually want mass participation in the political process. I’ve written before on why our current establishment does not.

As producers of news, it’s incumbent on us to acknowledge and declare our biases. You’ll see we do so on our Values page.

It is entirely acceptable, and indeed important, that campaigning journalists seek to influence the opinion of their readers. It is not enough that people simply know what’s happening – often, our input as citizens is required. Certainly for us at The Canary, we don’t want readers left sitting on an emotional response after reading something that concerns then. We want them equipped to take action, to feel empowered that this is their world and they have a say. That’s the purpose of the Get Involved section at the bottom of our reports.

Is this notion open to abuse? Absolutely. In fact, it has been abused for as long as news media has existed.

But just because (most often) a corrupt establishment abuses the use of media to entrench the status quo, this should not prevent disruptive and and transformative individuals and groups from using it to overturn that iniquitous status quo. Like a hammer, the news media can be a tool to build or destroy – and it’s all about creating the kind of critical thinking and literacy in readership that can help improve this. That’s the balance which consumers and producers of news can strike together. As producers, we declare and manage our own biases. As consumers, we should shop around, read widely and critically, and not only those writers/media outlets with which we agree.

For all of this to work, media plurality is essential. It is a cause for real excitement that an array of brand new media outlets are growing, and providing people with access to a far wider and deeper analysis of events. This creates a far broader landscape from which all of us can access and evaluate competing ideas. You’d really have to be an ideological zealot to fear or work against that trend. You’ll see plenty of those zealots in the pundit class carping on daily about the audacity of new media outlets to dare hold a contrary opinion to them. That’s how zealotry works. Just ignore them and go enjoy the vastness of the new media.

In conclusion: Read us, but don’t just read us. Help us by subscribing, but subscribe to other new media outlets as well if you can. If we want a new media, one that represents the true diversity of expertise and ideas in our intellectual commons – we must help to build it. Our dreams of living in a healthy, open democracy depend on it.