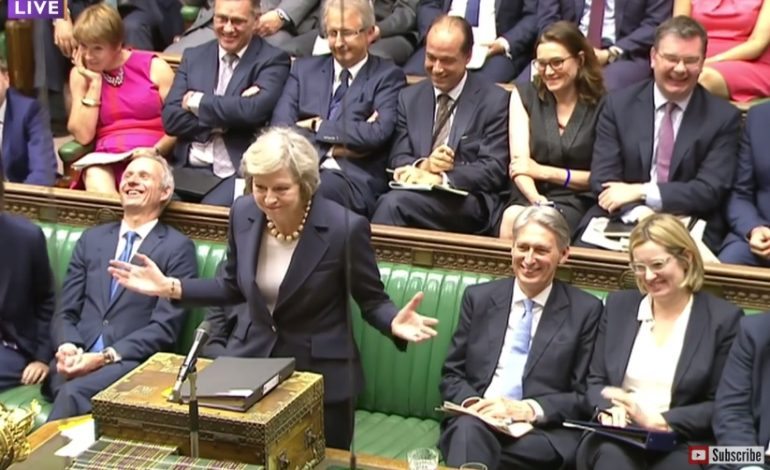 Hold onto your hats folks, because we may have reached peak Telegraph. The conservative publication featured a column this week entitled: ‘Thanks to Theresa May, we’re free to shop at Waitrose without apologising for it.’

The 25 July column by Rowan Pelling rejoices that Theresa May was photographed doing her weekly shop in Waitrose, rather than roughing it in Asda with the rest of the plebs.

One of the good points it makes, is that it’s refreshing to see a prime minister avoid the ham-fisted attempts at ‘I am just like you’ that saw Eton-educated, trust fund heir David Cameron fly EasyJet, and buy his millionaire wife Samantha a secondhand Nissan.

However, the piece moves on to celebrate some sort of resurgence of middle class entitlement – a celebration of no longer feeling the guilt attached to privilege in a time of great want and deprivation. Pelling writes:

Most MPs consider Waitrose’s well-heeled demographic makes it a no-go zone for anyone striving to be prosier than thou: a new report from Lloyds bank even suggests that living near a Waitrose adds £40,000 to the value of your house.

Better to be seen shopping somewhere more humble: David Cameron was often snapped buying his groceries at the relatively egalitarian Sainsbury’s in Chipping Norton, even though the Camerons filled the fridge in Downing Street with Waitrose goodies delivered by Ocado.

Our new PM has no such qualms.

Who hasn’t stood in front of a Waitrose freezer and gazed longingly at the Tanzanian Chocolate ice cream with Blood Orange Sorbet? Or felt their life is incomplete without Crisp & Zingy Mojito Chicken Cigarellos?

Part of the pleasure of the Waitrose experience is tracking down an item you’re sure no consumer group in the history of shopping has ever really needed, never mind demanded, and then succumbing to the overwhelming urge to purchase it: double-yolked eggs, anybody?

A friend of mine practically expired with excitement when she found the Cambridge branch had started selling Chelsea Confectioner Rococo’s exquisitely expensive bespoke English Chocolates.

Fantastic for Theresa, and we’re sure everyone is thrilled that Middle England can now feel free to gorge itself silly on Samphire Beignets without those annoying reminders that 3.9m children in the UK are living in poverty. What a relief.

Of course, the piece does overlook a few items about the May premiership which could be a cause for concern.

But don’t worry. Middle England will be kept safe from the madness, able to sit out the chaos in the luxury of their nearest Waitrose, while the rest of the country goes up in smoke.