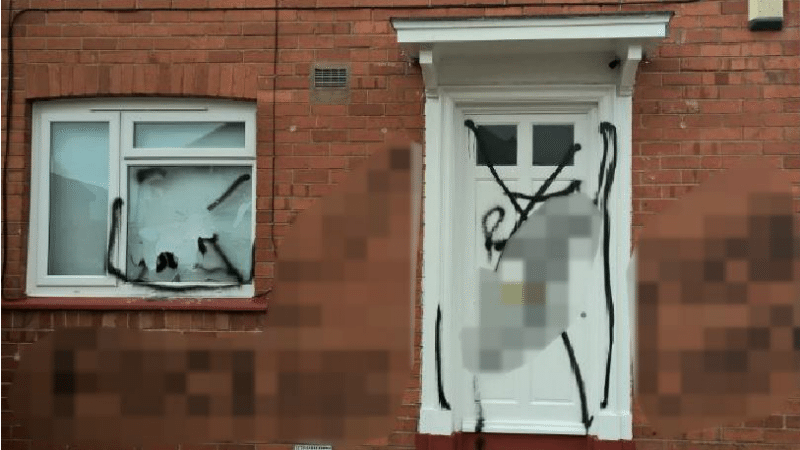 Four houses in one Bristol street have been attacked in what local authorities have described as a series of ‘vile’ racist attacks.

The attacks took place in Bideford Crescent in Knowle West, a largely white, deprived area of the city – and targeted families of Polish and Nigerian descent.  As local news outlet Bristol 24/7 reports:

Four houses in one street in Knowle West have had bricks thrown through their windows and two have had obscene racist graffiti scrawled across the front in the last six weeks, police have revealed.

Messages of “f*ck off” are believed to have been sprayed onto the walls of one Polish family’s home during the attacks. Some of the graffiti is so offensive police have censored it from pictures released with their appeal. One home has been targeted twice.

The appeal comes a month after Bristol24/7 revealed a rise in hate crimes across Bristol since the vote to leave the EU.

Inspector Nigel Colston, Bristol neighbourhood beat manager, said: “This is an absolutely disgusting and vile series of attacks on people’s homes and it is completely unacceptable.

“The residents of the properties targeted, some of which were inside when the incidents took place, have been left feeling scared and intimidated.

“I’m quite sure that most reasonably-minded people in the Filwood community would be shocked and appalled at the level of hatred shown to these families and I would appeal to them to contact us should they have any information at all about this, or any other racially motivated hate incident in the area.

“I know that this is a good, strong community with a real heart and I really hope to see people come together to try to help the victims in these cases.”

Bristol is a multicultural city, with long established migrant communities, which generally co-exist together in relative peace and harmony. If this is happening in Bristol, it could happen anywhere.

These attacks form part of a wave of such incidents which did not begin with the right wing campaign to leave the EU, but have certainly been exacerbated by it. One Facebook group collates the sorry litany of hate crimes in recent weeks, including this summary below:

Beyond the anecdotal evidence, there is statistical evidence to suggest that hate crime in Britain has spiked. Police say the number of reported hate crimes in Britain since the EU Referendum is up 42% on the same period last year. While the politicians who created this climate of hate (men like Michael Gove, Nigel Farage and Boris Johnson) continue their lucrative careers, regular families across the country are paying the price.