While the world mourns for Aleppo, MPs show just how little they care [TWEETS] - Canary 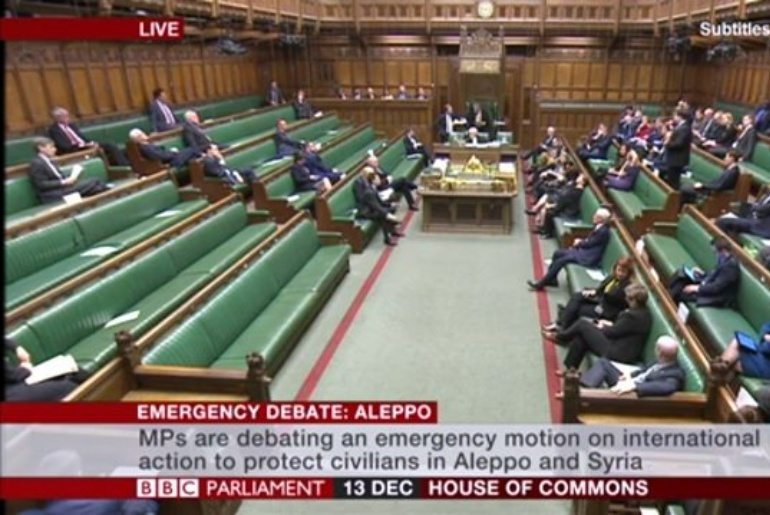 MPs have faced condemnation after only a handful of them turned up for an emergency debate on Syria. Amnesty International called the turnout “shameful”.

MP Andrew Mitchell called the emergency debate to address how to protect civilians trapped in Aleppo. And while senior MPs attended, including Foreign Secretary Boris Johnson, the chamber was noticeably empty. In particular, observers noted the difference in attendance when parliament met to debate bombing Syria:

What a difference a year makes. In Dec 2015, Commons was packed for vote to bomb #Syria. It was half empty for today's #AleppoDebate #Aleppo pic.twitter.com/n4Suidr2VQ

While Aleppo was rapidly being transformed into one mass grave today, it was shameful to see so many empty spaces during the Syria debate in the Commons.

Benedict then continued, commenting on the message this is giving to Syrian civilians:

Anyone in Syria who sees images of those empty green leather benches will be entitled to think that large numbers of British MPs have essentially given up on trying to help them.

Amid devastating accounts from Aleppo, a UN spokesperson spoke of a “complete meltdown of humanity”. And with tens of thousands of people reportedly trapped by the fighting, it is indeed a desperate, horrific, and complex situation. You might hope that your MP would think it worthwhile to attend this debate. But apparently not.

Shadow Foreign Secretary Emily Thornberry spoke of “desperately dark and terrifying times for the people of Aleppo”, and the passion of those there was evident. But it seemed parliament felt it could do little to alleviate the crisis.

So maybe this is the sad realisation that we need to come to. Parliament is great at voting to bomb places. Just not so good at sorting out the resulting catastrophes.

– Every bomb comes from somewhere. Support Campaign Against Arms Trade and help shut down the arms trade.