Maybe I've got 'new parent' syndrome, but what I just witnessed at a state school shocked me [OPINION] - The Canary 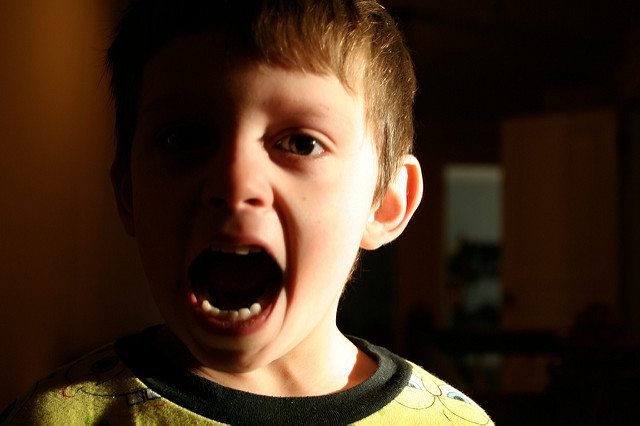 The Conservative government, and its Coalition predecessor, are not known for their respective education reforms. As The Canary recently reported, Labour’s Shadow Education Secretary Angela Rayner slammed the Conservatives for what she called “six years of turmoil in our schools”. But on Friday 9 December, I witnessed the turmoil in one school, first hand. And what I saw shocked me.

Maybe I have ‘new parent’ syndrome, because my partner has a ten-year-old son, who I’ll call ‘Josh’. This, so you know, is my first experience of the day-to-day life of a parent. He’s articulate, bright and sometimes cheeky. We live on the edge of the London borough of Bromley, just on the outskirts of Crystal Palace, which is a melting pot of five different boroughs, including all ends of the socioeconomic spectrum.

On 9 December, Josh had to sit an entrance exam. Now, in my 35-year-old head, entrance exams were something you did if you wanted to apply for a grammar school. Or a private college, specialist school, or (in my case when I was younger) drama school. But, apparently, not any more.

Josh is applying for a place at Harris City Academy in Crystal Palace. Academy chain the Harris Federation runs the school. Josh has also applied to another Harris academy, and his exam result will be shared among all Harris schools.

I was somewhat taken aback when I found out Josh had to sit an entrance exam. I’d assumed that children just automatically got a place at the school nearest to them. That’s how it was in my day. The nearest school, in Josh’s case, is actually the Harris City Academy. But it seems policy now, at least with the Harris Federation, is that children take an entrance exam.

involv(ing) the ability to understand and analyse visual information and solve problems using visual reasoning. It enables students to analyse and solve complex problems without relying upon or being limited by language skills. [The tests] can give insight into the abilities of those who have problems with reading and thinking verbally, those who may lack motivation, whose native language isn’t English and those with specific learning difficulties.

Myself and my partner sat down one evening, and attempted a set of these tests, which Harris says are impossible to pass or fail. We spent two hours deliberating (or arguing, depending on your viewpoint) over an exam that was supposed to take 30 minutes. And at that point, we gave up. The idea of completing the 50 questions in half an hour seemed ridiculous.

Josh did some trial runs, and fared quite well. But to hear a 10-year-old boy repeatedly tell you he felt under “pressure” and “worried” sat uncomfortably with me. Both me and his mum have told him it doesn’t matter how well he does, as it’s not a reflection on any of the numerous talents he has. But that’s probably of little succour to a boy who not only has had to sit multiple SATs, but now has to take a one hour and 45 minute exam just to go to secondary school.

The day of the exam arrived, and we took Josh out for lunch beforehand. No buses were running down the road the school was on that day, so we got a taxi there instead. As we approached the entrance, traffic was gridlocked. As the driver pulled up at the school, we realised what the delay had been. This was the queue for the exam outside the school: 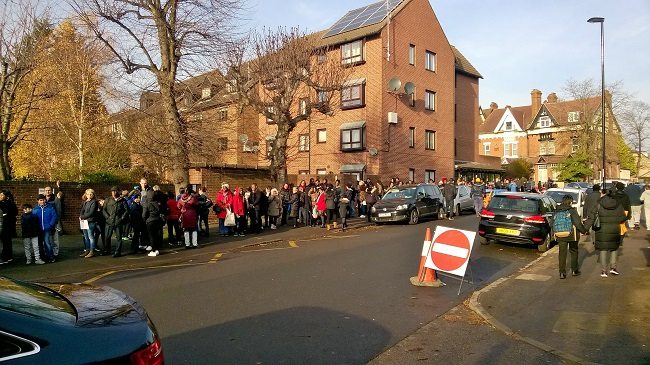 And this was the same queue, but extending right up the side road next to the school: 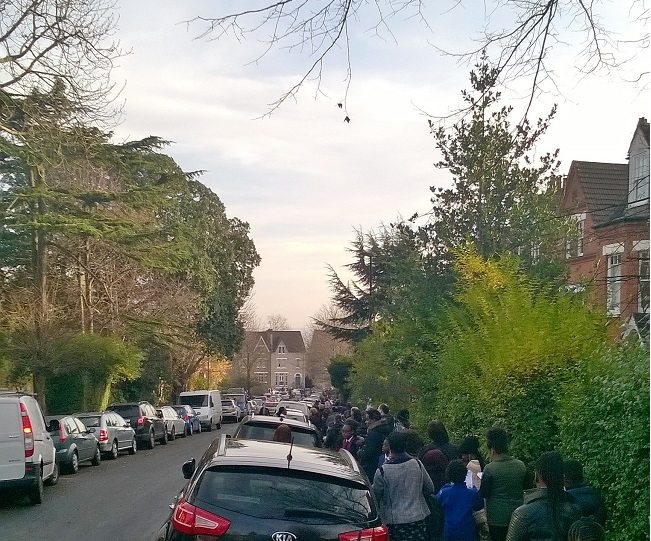 All-in-all, there must have been about 700 people queuing for this entrance exam. But when I read the notice on the school gates, it came as little surprise. Because Harris stated that it had had a staggering 2,000 applications just for the 180 places it has for the next school year.

The situation at the school stunned me. Bear in mind, this is not Eton College. This is a standard academy, in the most populous borough of London. It replaced Sylvan High School, a mixed comprehensive, in 1990. So, since when did children have to start taking complicated entry exams for a state secondary school? And since when were they made to queue up for an exam, like they were waiting to see Justin Bieber in concert?

Then, the penny dropped. The Harris Federation is forcing children to take the kinds of exams also used by the grammar school ’11+’. Note the University of Kent definition, again:

[The tests] can give insight into the abilities of those who have problems with reading and thinking verbally, those who may lack motivation, whose native language isn’t English and those with specific learning difficulties.

But just what exactly is Harris using the entrance exams for?

Harris says it runs the tests to “ensure that students of all abilities have a chance of gaining a place at the Academy”. Its website states it operates a fair, banded admissions policy: 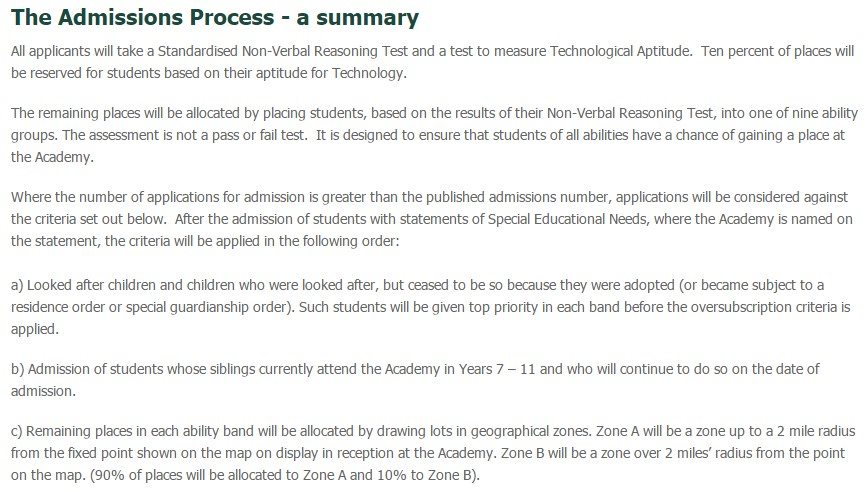 Not quite what it seems…

Yet Harris City Academy’s own data [xls] seems to suggest that the admissions policy isn’t working in quite the way Harris claims.

The dataset for children at this year’s Key Stage 4 (KS4) level details their previous attainment level at Key Stage 2 (KS2). Or, in other words, their attainment at the end of primary school. Harris City Academy’s breakdown for last year’s KS4 pupils was:

Maybe this was just an off-year for Harris? Apparently not. Government archives show Harris City Academy’s data for 2011 as:

But maybe children in the area are disproportionately high ‘attainers’? So, I checked Harris’ data aginst the nearest mixed, non-Harris secondary school, within a two mile radius (City Academy’s catchment area). The dataset for The Norwood School, which also uses non-verbal reasoning tests as entrance exams, was as follows:

I’m not the only one who appears to have spotted this anomoly. An article for Schools Week in December 2015 highlighted the problem with fair banding, saying:

Pupils from chaotic backgrounds face missing out on school places because they have to attend several secondary schools for fair banding tests.

It quotes Ruth Kennedy, a former school governer going through the admission process with her son, as saying the process was “highly likely to challenge families already socio-economically disadvantaged… I wonder how effectively this filters out children from more chaotic or under-pressure backgrounds? It feels like a test of parental commitment.”

What have the Tories done to state education?

Such de facto ‘selection’ fits in perfectly with the Conservatives’ latest fad for grammar schools.

But when you see who’s behind the Harris Federation, that may be unsurprising. Harris’ sponsor is one Lord Harris, an offshore Tory peer who has a multi-million-pound fortune from running the firm CarpetRight. Harris is a major Conservative Party donor, and several other people involved in the Harris Federation are Conservative supporters or government education advisers. The Federation is also known for its high levels of staff turnover. And it has been dogged by controversy, namely accusations of “losing” pupils to make its GCSE results look better.

Josh seemed fine after his exam. He shrugged his shoulders and told me it was “good”, whatever that means in 10-year-old speak. He then went off to play something called Minecraft on his PC. To be honest, I’m not sure which I find more baffling. Non-verbal reasoning tests or the online world of Minecraft which looked like something from a Dire Straights video.

But whatever the reasons for a secondary school chain forcing pupils to sit a grammar school-type exam just to get a place, I am certain of one thing. The pressure of modern-day life is already enough for a 10-year-old. Then, add into the mix SAT exams, and children feeling stressed starts becoming the norm. But throw in an entrance exam which makes them feel like they may not be good enough to even go to secondary school? This is not education as I remember it. And it’s certainly not how it should be.

The Canary approached the Harris Federation for comment and will update the article with any response.

– Read more articles from The Canary on education.