The SNP's Angus Robertson disgraced Theresa May, and it showed what a lowlife Britain has become - The Canary 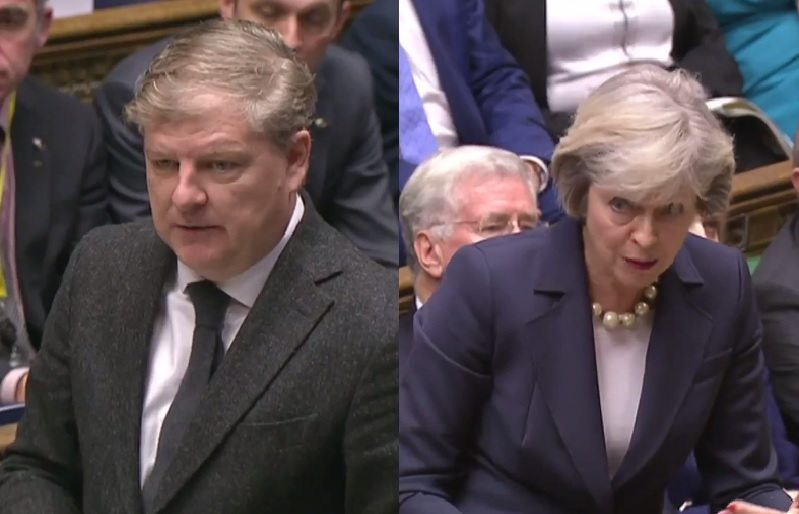 The SNP’s Angus Robertson absolutely disgraced Theresa May at Prime Minister’s Questions (PMQs) on 14 December. His interjection highlighted a situation in which Conservative-controlled Britain is currently prioritising alliances over life. While also valuing money over ethics.

And extraordinarily, he revealed that the country has now surpassed the US in its dogged allegiance to the war machine.

Mr Speaker, civilians have suffered grievously with the bombing of hospitals, of schools, of markets. The United Nations believes that 60% of civilian casualties are caused by airstrikes.

With the battle for Aleppo just drawing to an end, listeners may have thought Robertson was referring to Syria. Yet he was talking about Yemen, and the brutal bombing campaign Saudi Arabia is carrying out there. Since that offensive began in 2015, the UK has approved £3.3bn worth of arms sales to the Saudi kingdom.

In the last 24 hours, the United States has stopped the supply of precision-guided munitions to Saudi Arabia to bomb Yemen. When will the UK follow suit?

Much as the UK has been doing, the US has been selling weapons to the kingdom during the campaign. But anonymous US officials say that a decision has now been made to limit the supply. One commented:

We’ve decided not to move forward with some foreign military sales cases for air-dropped munitions, PGMs [precision-guided munitions]… That’s obviously a direct reflection of the concerns that we have about Saudi strikes that have resulted in civilian casualties

The US is the world’s biggest arms dealer. And it has caused countless civilian deaths in wars of its own. So the fact that the Obama Administration now views the assault on Yemen as ‘too hot to handle’ is a dire appraisal of Saudi Arabia’s actions.

Standards lower than the US

In response to Robertson’s question, May said:

That “strict regime” includes not selling weapons to those who are committing war crimes, or breaching humanitarian law. This is an accusation that is regularly thrown at Saudi Arabia over its bombing in Yemen. Until July, the UK government said it had looked into such accusations in relation to the kingdom and concluded there was no breach. But that same month, it admitted no assessment had actually been made.

In November, the Foreign Office announced it had finally looked into it and concluded there had been no breach of international law in Yemen. Yet it confessed it did not “have access to all the information required”.

Who needs ethics when we’ve got friends?

Robertson continued to press May on the issue, and asked: “what will it take for the UK to adopt an ethical foreign policy when it comes to Yemen?” She insisted that the UK takes breaches of international law seriously. And she reminded him of the UN’s backing of the intervention.

But she also told Robertson that the UK has a relationship with Saudi Arabia. And that the “intelligence” provided by the country has “saved lives” in the UK.

Yet one of the most military-minded and security-conscious nations in the world has decided to stop the flow of arms to Saudi Arabia, even though it too has a relationship with the country. Because, presumably, its complicity in the scale of bloodshed in Yemen cannot be justified on national security grounds.

But May is willing to use exactly that argument to ensure the country is an accessory to Saudi atrocities. And it shows exactly what sort of a lowlife the UK has become under the Conservatives.