The offices of The Daily Mail get blown to bits, in this must-read, hilarious crime caper novel - Canary 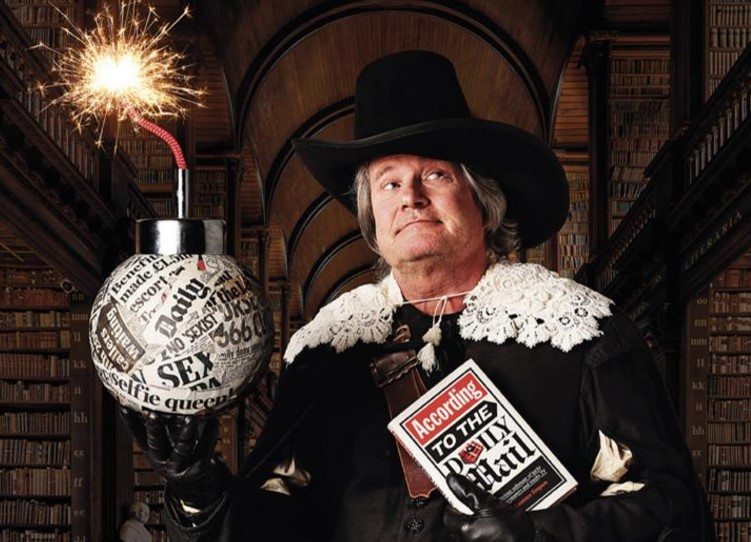 A crime caper novel sets out to take down the right-wing press, by getting the central character to blow up the offices of The Daily Mail. And while it’s a work of fiction, the book poses some serious questions about the nature of 21st century life, and the mainstream media’s influence over it.

Taking down The Daily Mail. Permanently?

According to The Daily Mail is a novel by Laurence Simpson. It charts the journey of jobbing gardener Jonathon Taylor who, after his friend wins the lottery, comes into £10m. But he doesn’t invest the money, or go on a spending spree. Instead, he decides to use the cash to hire a crack team to take down The Daily Mail. Once and for all. But he ends up going much further than he ever imagined. And his life changes, forever.

The book is reminiscent of crime caper movies from the 1950s and 1960s, like The Italian Job and The Lavender Hill Mob. But speaking to The Canary, Simpson said that he didn’t intentionally set out to write that kind of novel. “But I did want the story to be a fun escapade, and not a dull diatribe,” he said. Taylor is every bit the ‘lovable rogue’, and The Canary asked Simpson if there was any of himself in the central character:

Ha! That’s exactly the phrase my old Headmaster in Brighton used to describe me in an end-of-term report. ‘Lovable rogue’. So the answer would be, yes.

There are, however, distinct whiffs of Ealing Studios-produced capers in According to The Daily Mail. Taylor goes about recruiting a gang of ex-soldiers and an insider at The Daily Mail to carry out the elaborate plot. Cue dodgy disguises, false accents, dumbfounded police officers, and a healthy dose of quintessential English gentlemen. But it’s all set in the 21st century, so expect smartphones, hacking and Semtex. And while the book is an entertaining romp, it contains well-constructed troughs to counter the peaks.

One fascinating relationship that’s explored in According to The Daily Mail is that of Taylor and Bianca Bennett. She is the cashier at his bank, who deposits his £10m for him. An unexpected romance between Taylor and Bennett begins, which initially seems to be based on sex for him, and money for her. But as the book develops, Simpson weaves it into a full-blown love story, and does so with a delicate hand and touching attention to detail.

It’s this relationship which juxtaposes so well against the misogynistic output of The Daily Mail. In a particularly well-executed section, Simpson describes how Taylor is planning to hack the paper’s website. The plan is to replace The Daily Mail’s bog-standard ‘trigger’ words, with what the paper actually means. For example:

Simpson goes at length in the book to expose The Daily Mail for what many think it really is. He told The Canary that it’s a huge, societal problem that tabloids have a “hell-of-a-lot of influence over people’s value systems”. As Taylor ponders in According to The Daily Mail:

Here was a paper which piously protested against certain types of behaviour yet was itself regularly guilty of the same transgressions. Here was a website that proudly claimed to be anti-porn and anti-paedophilia, yet which thought nothing of describing a fourteen year-old girl as ‘flaunting her curves’.

And it’s exactly this “daily torrent of abject rubbish” which drives Taylor to take The Daily Mail out.

Simpson himself is no fan of the right-wing press. But he told The Canary that it’s not that he dislikes it as such, but:

It’s more a dislike of hypocrisy and rank sensationalism than anything else. That and mean-spirited reporting about folk who are down on their luck; for example, Paul Gascoigne. Oh, and hacking into the phone of a murdered schoolgirl doesn’t endear them to me, either.

But According to The Daily Mail also poses some deeper questions. Specifically surrounding freedom of speech. In an exchange between Taylor and his friend David Strange (who won the lottery), they are discussing the taking down of The Daily Mail:

‘Yes’, said David, ‘but what about all those poor people who like the bloody Daily Mail?’

‘F*ck ’em’, offered Jonathon with conviction, ‘they’ll get over it.’

‘You know you’re trying to play God, don’t you?’

The thought had occurred to Jonathon before. ‘No, I’m not; I’m playing Parent.’

In the book, the reader often feels reminded of the famous misattribution to Voltaire:

The book does a sterling job of making the reader question just how far free speech can, and cannot go. And as Simpson told The Canary with a grin: “I don’t think the right-wing press should be outlawed… But I do think their printing presses and websites should be sabotaged”.

Taylor’s plans in the book end up going much farther then he intended them too. This leads into an excellent denouement, where all of his guiding morals are challenged for one last time. And it’s a fitting closing, as According to The Daily Mail leaves the reader with the same sense of belief-questioning. Is defeating the right-wing press just a battle in an unending war?

What sets out to be an entertaining caper actually turns out to be a very well-constructed appraisal of the modern media, and the public’s relationship with it. According to The Daily Mail does, in many respects, read like a screenplay, and could easily transfer to the cinema. The characters are well fleshed out, including those in supporting roles whose backstory the reader is given. And Simpson’s attention to scene-setting, both in terms of mood and environment, is commendable.

He crafts a warm and almost sentimental tale of one man’s dream becoming multiple realities. It could have been overly aggressive. But no one dies, and the book maintains some tongue-in-cheek moments during the action sequences. As Simpson told The Canary:

I wanted it to entertain rather than lecture, while nonetheless having a sprinkling of thought-provoking passages.

According to The Daily Mail delivers on both those fronts. It’s a charming tale of one man with a big dream; how his dream becomes a reality; and how the reality becomes an exciting and at times hilarious story that even The Daily Mail would struggle to make up.

– Buy According to The Daily Mail.

– Read other book reviews from The Canary.

Note: This article was updated at 11.30am on Friday 16 December to reflect a error regarding a character’s name.